Tonight is Halloween and for the past month costume stores have seemingly been appearing on every block.  When first entering one of these stores, packaged dresses, make-up, and props envelop you.  At first, everything seems like it was created in good fun.  But, after taking a closer look, costumes with the names of “Sexy Indian Princess”, “Bollywood Babe”, “Taj My Mahal”, and “Sexy Geisha” are everywhere.  This type of racism is something that is more widely accepted by society.  It even has its own name: cultural appropriation.

Cultural appropriation can be defined as the people of a powerful society invading a less dominate society and taking only select aspects from the objectified culture to use as they please. As there is no desire to understand any of the cultural aspects which have been thoughtlessly borrowed, cultural appropriation can also extend to speech patterns, clothing, makeup, and jewelry.

This act helps to enforce racist stereotypes, forces the idea of “exotic” on individuals, and puts a monetary value on items that should not be sold to the general public. Essentially, there is an often-times subconscious attempt to invalidate the society and the people.

Images of hyper-sexualized women in “native” costuming from maltreated or stigmatized cultures continues the oppression of the group, which is already treated in a different light in American and white society.  Because of colonization, the Western world holds power over many groups of people, and it is harmful when American society “accepts” one part of a culture but continues to marginalize or express disdain for it in all other cases. 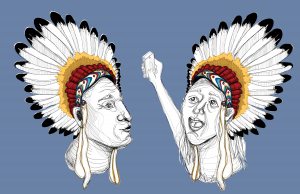 One of the most poignant examples of this problem is the cultural appropriation of Native American culture.  These “sexy Indian” costumes promote hyper-sexualization of women whose voices are spoken over or completely ignored in America.  According to the NY Times, one in three Native American women will be sexually assaulted in their lifetime. Disregarding this problem, widespread racism and slurs against these women are constantly brushed aside.  Adrienne K, a Native American blogger, wrote a piece about the appropriation of her culture.  She states:

“But you don’t understand what it feels like to be me. I ‘m a Native person… You walk through life everyday never having the fear of someone mis-representing your people and your culture. You don’t have to worry about the vast majority of your people living in poverty, struggling with alcoholism, domestic violence, hunger, and unemployment caused by 500+ years of colonialism and federal policies aimed at erasing your existence. You don’t walk through life everyday feeling invisible, because the only images the public sees of you are fictionalized stereotypes that don’t represent who you are at all…”

A piece that is easily purchased at any time of the year is a “headdress”.  These brightly dyed chicken feather pieces are a cheap impression of read headdresses.  For Plains tribes, wearing one of these is taken as an insult. Not only are they condensing over five hundred distinct cultures into one, real war bonnets have a powerful spiritual significance. The feathers are from eagles, and represent honor and have to be earned through a ritual ceremony. Similar to the growing controversy surrounding the football team the “Redskins,” dressing as a Native American promotes “red face” and gives the idea of one tribe of Native Americans, not of the hundreds of unique groups that exist in the United States.

Cultural appropriation can extend to “sugar skull” makeup, making a mockery out of the holiday “Day of the Dead” in Latino culture.  This is a day of celebration and one to honor those who have died, and by wearing this type of makeup you are not only insulting the living, but also the deceased.  Sugar skulls, among other items, are used in alters placed on graves to help guide the spirits back to their graves and their families.  Casual use of this makeup continues the cycle of erasure that has tried to silence the stories and culture of Latino men and women in the United States.

A costume that is growing in popularity is that of “Indian” clothing.  An item that is normally included in these bags, along with being easily purchased in many stores, is the bindi.  Bindi’s are a religious symbol in Desi culture, used to show the sixth chakra and is said to represent the third eye, protect against evil spirits and bad luck, and to strengthen concentration. When Western women wear this piece, it is looked upon as attractive, an accessory, and they are praised for creativity.  Conversely, when Desi women try to wear this piece, they are usually called unprofessional at work, looked down upon, and called racist names.   After Selena Gomez wore a bindi during a performance, E Online reports that the Universal Society of Hinduism wanted an apology, stating:

“It is not meant to be thrown around loosely for seductive effects or as a fashion accessory aiming at mercantile greed. Selena should apologize and then she should get acquainted with the basics of world religions.”

“G*psy” outfits are also easy to come across during Halloween.  As this word is pasted on the bags that contain the costumes, few understand its origin as a racial slur. Through the use of the word g*psy, Roma people have been oppressed and shunned. The OED defines g*psy as “a cunning rogue” and  “a contemptuous term for a woman, as being cunning, deceitful, fickle, or the like; a ‘baggage’, ‘hussy’, etc.” In American culture, the idea of a g*psy lifestyle is so heavily romanticized that we forget that in Europe there are still Romani ghettos where the word is used in extremely racist and violent ways.

There ARE ways to experience and enjoy other cultures, such as going to open pow-wows or attending Holi with a friend. These experiences can both expand your mind and instill the participants with a greater understanding of cultures different from their own.  Buying over-sexualized poorly made costumes to wear on Halloween is not a way to appreciate people who are dealing with the effects of racism every day.