An Introduction to “Thinking Gender”

The UCLA Center for the Study of Women (CSW) hosted its 28th annual graduate student research conference on March 1-2 in the UCLA Faculty Center and Kerckhoff Hall. This year’s theme, “Thinking Gender: Pre-existing Conditions,” as described by CSW, aimed to “highlight graduate student research on women, sexuality, and gender across all disciplines and historical periods.” “Pre-existing Conditions” came about from a desire to discuss the relationship between health and gender in light of ongoing issues relating to gender-focused health and healthcare.

The conference featured paper, poster, and speed pitching round tables on current research regarding sexuality, gendered violence, art-and labor-based advocacy in the field of gender studies. In addition to these presentations, visual art displays allowed for a unique and creative depiction of the ways in which health and gender are translated into social circumstance and current experiences of the female human condition. Coming from different backgrounds and academic fields of study, conference organizers and attendees alike appeared interested in how the theme of this years conference would interact with their own lives.

Terri Conley, who holds a doctorate in social psychology from UCLA and is an Associate Professor at the University of Michigan, kicked off the conference with a triumphant keynote address. In a little less than two hours, Conley broke down the bulk of everything she had learned about gender differences in her long and illustrious career — theories she had debunked, paradigms she had shifted. With humor and heart, she talked us through some sobering observations and set the foundation grounding the rest of the events.

The biases she’s had to contend with, whether they come from others or herself, are not surprising considering that the focus of her research is how men and women anticipate and react to real and hypothetical sexual offers. Common assumptions which ground research in this area are 1) that men are hypersexual because they want to propagate as widely as possible, and 2) that women are more discriminating about which sexual offers they accept because they want as much security for their family as possible. But these assumptions are crude, heteronormative, and not reflective of the broad spectrum of sexuality.

Conley deftly argued against oversimplifications of the issue by pointing out how her studies have shown men are not totally indiscriminate and women’s sexuality is not so underdeveloped. Rather, these typical gender preconditions are compounded in social issues of toxic masculinity and rape culture. Cisgender men are typically socialized to couch their masculinity with more assertive and sometimes predatory sexual behavior or else they will be seen as less successful than other men. As a result, women and those of other gender identities generally perceive more risk in sexual encounters than men do, and cisgender men generally only seem to consider any threat if the encounter involves another man.

Two artistic performances by students of the Art and Global Health Center, a think-tank in UCLA Department of World Arts and Culture, were given to introduce the Art-Walk, an activity that would take attendees from the faculty center to the art reception hosted in Kerckhoff Hall. Gabriel Bonder, the Administrative Coordinator, described how the Art and Global Health Center seeks to harness the communicative power of the arts. “We believe the arts have a vital role to play in challenging health disparities, particularly those faced by marginalized communities, including women, trans-gender and non-binary communities,” began Bonder. “The arts have the ability to speak to the holistic and human realities of health in a way that other fields often struggle to. And I think that you will find that to be true in the fantastic visual art, film, and performance art that we have lined up for you in Kerckhoff.”

Two young women performed powerful monologues which narrated, through personal accounts, the day-to-day struggle of dealing with stigmatization. While discussing living with HIV, one performer noted, “I want to live in a world that isn’t afraid of me because the truth is common sense.” The second performer discussed life with genital herpes by saying, “stigma is more toxic than any virus,” and expressing how it was because of  “stigma that [she] began to hate [her] body.” The performers concluded by urging audience members to “use your words to empower each other.”

As it came time to make migrate to the Visual Arts Reception across campus, attendees were paired together to create haikus describing “what they believe women need to be healthy?”

One haiku read: “She must love herself / feel safe, secure, supported / by people she meets.” 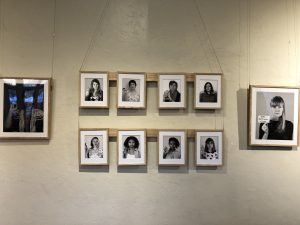 The immensity of the artistic pieces were clear upon entering the Visual Art Reception. Filling the walls, each work had an important story to tell. Sarah Fahmy, a theater and performance studies master student at the University of Colorado, Boulder, took a moment to speak with FEM about her piece: “No.Stop.Help.” “It is a a statement about victim blaming and sexual harassment that happens everywhere in the world,” Fahmy started. “The focus is always on the victim saying they were the perpetrators of the incident. We never really look at the oppressors, or what they [oppressors] are doing to cause it.” Famy noted that she saw a pattern throughout interviews, where news reports were identifying the male oppressors in perfect imagery, while the women’s faces and names were not given. Famy noted the danger of this situation: “We are othering them, isolating ourselves, and making it seem like this couldn’t happen to us.” 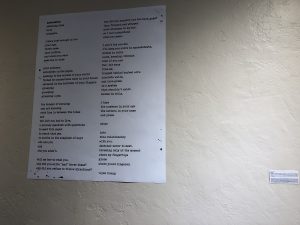 The piece is a compilation of real interviews and newspaper lines about rape cases and harassment. 60-by-80 inches long, the piece is a mixed medium of digital weaving and vinyl. From a distance it is impossible to make out the text printed, but as one got closer, it became clear that the words “no.stop.help” were repeated hundreds of times. It was important to Fahmy that the piece did not associate with any ethnicity, racial background, or economical status: “It doesn’t matter what you look like, how old you are, where you’re from — this could happen to anyone.” 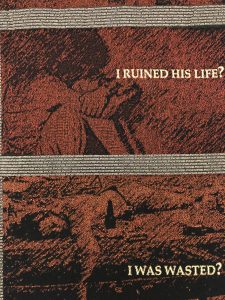 Attending the “Thinking Gender Conference: Pre-existing Conditions” leaves one feeling incredibly whole. A space of warmth, prosperity, and acceptance, every individual was open to questions and interested in creating a discourse that would promote understanding and intellectually stimulating dialogue. “Thinking Gender’s” 2018 Conference Coordinator, Drew Westmoreland, told FEM how the theme of the conference came about from her background in epidemiology and her research interests in sexual health: “Gender differences are inherent in what we do.” Westmoreland explained her love of art and its role in her life. And how when Dr. Victoria Vesna, the Director of UCLA Art | Sci Center was brought onto the project, the program plans expanded. The art concept quickly grew into a full gallery showing, film screenings, and more. “It comes from my interests and my past,” Westmoreland shared, “something I don’t get to do as much anymore as a doctoral student.” Westmoreland divulged that the conference has been in the works since last July, “so it’s been a labor of love,” she laughed warm-heartedly.