“The first Iranian Vampire Western ever made, Ana Lily Amirpour’s debut basks in the sheer pleasure of pulp,” Sundance recounts.

A Girl Walks Home Alone At Night plunges the audience into the ghost-town of Bad City, a town plagued by loneliness and darkness, where a lonely vampire lives amongst its citizens while roaming the city by dark on a skateboard.

On January 13th, I had dragged my friend with me to see an “Iranian black and white film about vampires” at the Hammer Museum. This ended up being the least conventional, best possible way to spend my Tuesday. The MOMA Contenders also hosted Amirpour for an interview following the film, and if the movie was not enough – I was mesmerized and not alone in my stupor.

Film Maker Magazine even puts Amirpour on the 25 new faces of independent film list of people to watch. 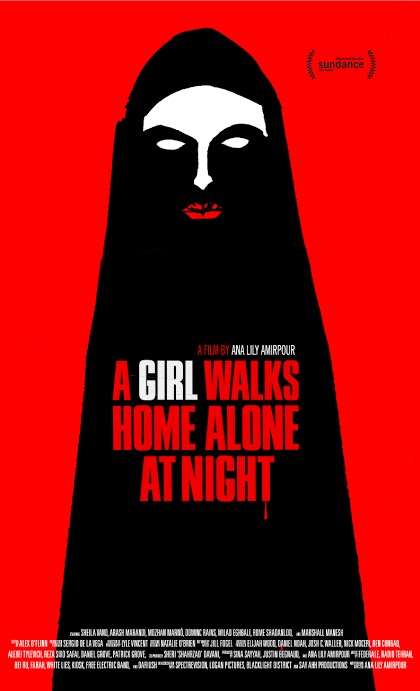 What is it that’s catching everyone’s eye?

Firstly, the lead is a girl. Not only a girl, but a sexy, powerful, passionate woman. The lead, ominously named “The Girl,” roams the city clad in a traditional chador. Amirpour cites this as a symbol of empowerment as The Girl powerfully strides across the city on her skateboard and has the ability to take it off whenever she pleases. The girl referred to in the title represents a sort of femme fatale character. This is not the norm when Western audiences think about Iranian women. Defying of the submissive, meek ideal, the main character presents formidable character in dominating the screen. This film allows Iran to be seen from a new lens for us Western viewers.

Identifying as American, European and Iranian, Amirpour epitomizes a mixing pot of cultures. This amalgamation is explored in the film. Sundance reviews, “A joyful mash-up of genre, archetype, and iconography, its prolific influences span spaghetti westerns, graphic novels, horror films, and the Iranian New Wave.” The tasteful medley of cultures, capitalizing on the archetypes of different cultures and genres, provides immediate relatability for all audience members.

Amirpour also exposes the audience to distinct Iranian music, amongst other genres. She wrote each scene centered around a specific song she had stuck in her head. She told us she wanted audience members to Shazam every song, as she cynically reflects, “Yes you want this!” and laughs. The film is placed in a modern context as the use of music frames the film with a sort of sexy surrealism. A Girl Walks Home Alone At Night is amped by a mix of Iranian rock, electronic riffs paired with whimsical, ephemeral, sounds. The soundtrack creates a powerful appeal to the black and white solemn screen, creating a context fusing the suspense of Sergio Leone and the uncanny world of David Lynch. The Girl’s ennui is felt in a sexy ballad of Iranian rock songs and romanticized evanescent coalescence.