At the core of American cinema’s history lies virulent prejudice. In 1915, D.W. Griffith’s The Birth of a Nation set the precedent for what stories American movies would tell. According to the LA Times, Birth of a Nation “practically invented modern cinema” and was the first movie played in the White House. The film celebrates the Ku Klux Klan and depicts black men (played by white actors in blackface) as subhuman, brutish threats to white women. These days, the film industry is still rife with problems. In 2016, all twenty of the actors nominated for Academy Awards were white. In response, actors and filmmakers boycotted the Oscars and #OscarsSoWhite was trending on Twitter.

Amidst all these problems, there are exceptional filmmakers who carve out spaces for themselves in an industry that was created to exclude them. On November 16th, I was able to witness one of those filmmakers, Julie Dash, talk about her most well-known film: Daughters of the Dust. Released in 1992, Daughters of the Dust was the first film directed by a black woman to have a wide theatrical release. The Theatre at Ace Hotel celebrated the film’s 25th year anniversary by hosting a screening for over a thousand viewers. The screening was followed by an interview between Dash and Ava DuVernay, director of 13th and Selma, and the first black woman to direct an Oscar-nominated film.

Daughters of the Dust depicts a family of Gullah people who live on Saint Helena Island off the coast of South Carolina. The Gullah are descendants of West African slaves who were brought to South Carolina by slave owners in the 1600s to grow rice. Due to their isolation from the mainland, the Gullah were able to develop a distinct culture, dialect, cuisine, and matriarchal society deeply rooted in their West African heritage. The film takes place in 1902 and centers its plot around the younger generation of Gullah people as they prepare to leave their island home and move to the North on the mainland.

Dash explained in the interview that her father’s Gullah heritage inspired her to tell a story about the Gullah people. When Dash studied film at UCLA, she fell in love with foreign film. With Daughters of the Dust, she strived to make a film so authentic to Gullah culture that even though it takes place in America, it felt like a foreign film. For example, although the dialogue is in the distinct Gullah dialect that may be difficult to understand for some viewers, Dash chose to leave out subtitles in order to fully immerse the viewer. Additionally, the story is told in the traditional Gullah form instead of the typical American narrative style that centers around a protagonist overcoming conflict. The character known as the Unborn Child of two characters on the island guides the cyclical narrative by weaving together stories of the past, present, and future of the Gullah women.

Daughters of the Dust is unlike any other movie I have ever seen. The combination of the narrative, visuals, and the music pulls the viewer into the uniquely magical world Dash created. The dialogue is interspersed with spiritual poetry spoken by the Unborn Child that reveals the rich mythical traditions of the Gullah people. The original soundtrack made up of ethereal synth tones and traditional drums adds to the mystery and dream-like quality of the film. Visually, the film is breathtaking. It artfully blends together lush images of black women in flowing white dresses dancing, cooking, embracing, and fighting among crashing waves and swaying willow trees.

Despite the film’s critical acclaim, groundbreaking techniques, and iconic narrative and imagery, it did not have great box office success. Dash attributes its box office performance not to a lack of viewer demand for her story, but to film executives’ apprehension at its nontraditional style. Not only is the film untraditional in its narrative and visual format, but also in its story and cast; it features an an all-black cast and tells a complex story about black women who are too often reduced to mere stereotypes in Hollywood. Dash mentioned in the interview that even some of her UCLA professors did not quite approve of her work while she was in film school and wanted her to tell the same kinds of stories we repeatedly see in movie theaters. However, the film has recently resurfaced and is gathering new strength due to none other than Beyoncé.

As I was watching Daughters of the Dust, I couldn’t help but draw parallels between it and Beyoncé’s recently-released hour-long visual album, Lemonade. Both films feature collective narratives about black women’s lives interspersed with poetry. They also both depict vibrant stories of black women in the American South and share similar themes including womanhood, motherhood, tradition, and spirituality. The visuals are also strikingly similar as you can see from the images below. 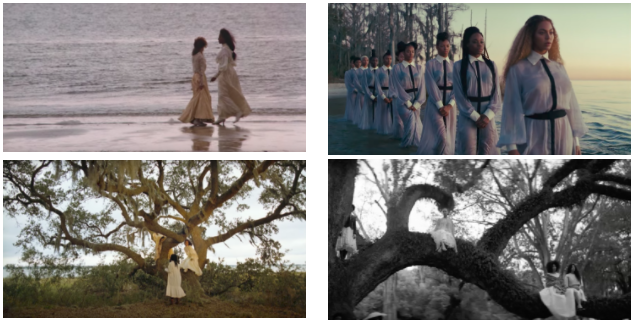 Other people have noticed the strong parallels between the films, including Dash herself. In an interview with Vanity Fair, she refers to Lemonade as a “sumptuous masterpiece” that “re-confirmed a lot of things that I [Dash] know to be true about visual style and visual metaphors. And the use of visual metaphors in creating, redefining, and re-framing a Creole culture within this new world.” Lemonade’s obvious reference to the film made Daughters of the Dust trend on twitter after Lemonade was released in 2016 and, according to Dash, sped up the 25th anniversary re-release of the film.

At the beginning of the interview between Ava Duvernay and Julie Dash, DuVernay told a touching story about the first time she presented one of her movies at a film festival. After the movie was done playing and it was time for audience’s questions and comments, the first hand to go up belonged to one of DuVernay’s heroes, Julie Dash. Dash proceeded to offer praise for DuVernay’s film and encouraged her to continue creating work. DuVernay recalled that in that moment, she understood the power of marginalized people in the creative world supporting one another.

102 years after the release of The Birth of a Nation, the entertainment industry is still often hostile to women creators, creators of color, and queer creators. But more and more, creators like Julie Dash, Ava DuVernay, and Beyoncé are not only making waves in a world that was not meant for them, but they are supporting one another and making space for other creators like them. It was beautiful to witness DuVernay and Dash supporting and celebrating each other, as well as to watch the audience express its love and support for them and the film. Daughters of the Dust is a gorgeous ode to black women, so if you haven’t seen it yet, watch it here and support this iconic film.