Last Week, I came to realize just how difficult it can be to defend pro-choice in the face of pro-life’s ethical arguments, and found myself rooted even deeper in my pro-choice stance.

On May 23 and 25, UCLA Live Action and Justice For All put up a pro-life exhibit and “free speech” whiteboards to engage with students passing by with the pro-life advocates standing by, ready for respectful debate and dialogue. 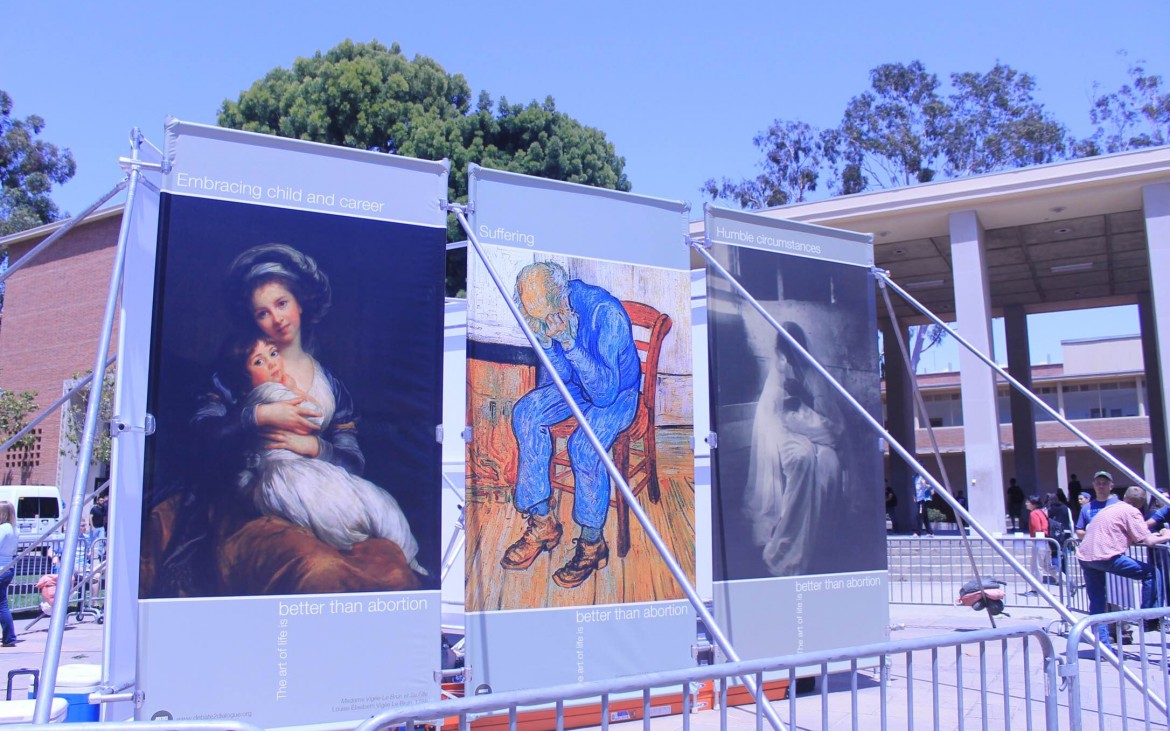 But the fact is that abortion is not unthinkable. Whether it is in the case of a pregnancy resulting from rape, a strained financial or social circumstance, or any other reason, an unwanted pregnancy resulting in the choice to abort is common and understandable. Childbearing is a life-consuming process and responsibility that affects the wellbeing of the pregnant person 24/7 for an average of 38 weeks. Abortion is a critical part of providing reproductive freedom to these people, which makes way for other social and economic freedom, too. The right to an abortion, therefore, should be protected if we are to gain equality and justice. The UN agrees that the “denial of legally available health services such as abortion” is a human rights violation. Justice For All and Live Action want to make giving people the option of abortion unthinkable, but doing so would force people to continue pregnancy against their will, a gender-based injustice which is, as affirmed by the UN, unthinkable.

The pro-life argument depends on the belief that a human person begins at conception. This assertion, I find, is problematic since human life/personhood cannot be defined in these stages with certainty, and so there is no common ground in claiming when life begins.

Everyone has different personal beliefs regarding when a human person’s life begins, and science has not been and is not able to unanimously agree on when a fetus gains personhood, a moral standard cannot be established. Thus, each case of pregnancy and each case of abortion should be in the hands of the pregnant person. Pro-life advocates’ plan to ban abortion is to force a decision for all pregnant people based on the pro-life opinion, not the personal beliefs of each individual person about their own body, which the fetus is a part of. This is the pregnant person’s right to their body, and any legislation that claims that right is infringing on the pregnant person’s freedom. Everybody is entitled to making decisions for their own body, and in pregnancy where the fetus is a part of the body, the pregnant person is entitled to making their own decision for that as well.

Steve Wagner, the Executive Director of Justice For All, said, “I don’t believe that my position that abortion should be illegal, generally speaking, is a position that forces women to become mothers. I think it forces [pregnant] women to comply with the fact that they already are mothers.”

But making abortion illegal would restrict women by causing major social and economic repercussions for their lives. The consequence of pregnancy can impact every other sphere in a pregnant person’s life; it can cause heavy financial burdens, increased anxiety and stress, restrictions on academic pursuits and career aspirations, exacerbating discrimination in the workplace, and crap ton of other shitty consequences, depending on each case. Choosing pregnancy is not easy. Choosing abortion isn’t easy either. It cannot be fair to criminalize a person who was faced with this decision, and ultimately decided to abort, preserving the freedom of and exercising the right to their body, life, and future. It is unjust to criminalize a person’s choice to an abortion based on the belief of pro-life groups and not the individual’s own. In the absence of a scientific consensus, situation-based judgement and autonomy of individuals is the most legitimate moral ground for abortion policy to respect and support, especially in a democratic society. How can we force people to seek out illegal procedures or go to drastic lengths of self-performed abortions that put them at risk as well?

I asked Steve if he agreed that it would be better for a pregnant individual to have a safe, regulated abortion procedure rather than having an illegal one that is much riskier for the health and safety of the pregnant person. While he did say that “Legal abortion is safer for the woman,” he argues that “It seems tantamount to saying even though women kill children in the course of an abortion procedure, it’s really important to make sure that abortion procedure is safe. It would be like saying, it’s really dangerous for a woman to kill her toddler, so we need to make it legal so it’s safer for her to kill a toddler.”

Once again, it comes to the question of whether the unborn can be equated to a live child, which cannot be answered with a scientific basis, or with a universal consensus of personal beliefs. It comes back to the question of whether a mass of cells should be entitled to human rights, which is ambiguous with scarce hope of more scientific clarity. But forcing a pregnant person, whose personhood is clearly established, into pregnancy is clearly an infringement on their human rights, and that is unquestionable — unlike the indefinitely unclear personhood of the unborn fetus. That being said, society must unquestionably agree to protect the rights of people who do get pregnant and decide to abort.

“I think there’s another question of, to what extent, the pregnant person’s right to their body, which I believe exists, how far does it extend? Does it extend, even to killing a human being? But you see, that question is meaningless if we don’t resolve the question of if this is a human being at the four-week stage… I think everybody in the discussion bears a burden there,” Steve concedes, if only just a little, to the fact that everyone will have a different opinion of the unborn’s living status, even if he believes his belief that life begins at conception is the belief with which all people should comply with.

That, ultimately, is what pro-choice stands for. Pro-choice champions for the freedom of people to choose what to do with their body and life depending on their own beliefs and life circumstances. Pro-choice has room for people who support and don’t support abortions alike. Pro-choice leaves the choice up to the individuals rather than imposing only one choice for everyone. This is the reality I hope state legislators will acknowledge and respect, and in turn make abortion not only legal but also accessible for people so they can truly claim the right to their body, their choice.