Installation view of “Mickalene Thomas: Do I Look Like a Lady?” October 16, 2016-February 6, 2017 at MOCA Grand Avenue, courtesy of The Museum of Contemporary Art, Los Angeles, photo by Brian Forrest

By the time this article goes public, Mickalene Thomas’ exhibit “Do I Look Like a Lady?” will have come and gone from downtown Los Angeles’ Museum of Contemporary Art. While that may be, Thomas’ message resonates beyond the walls of the museum. 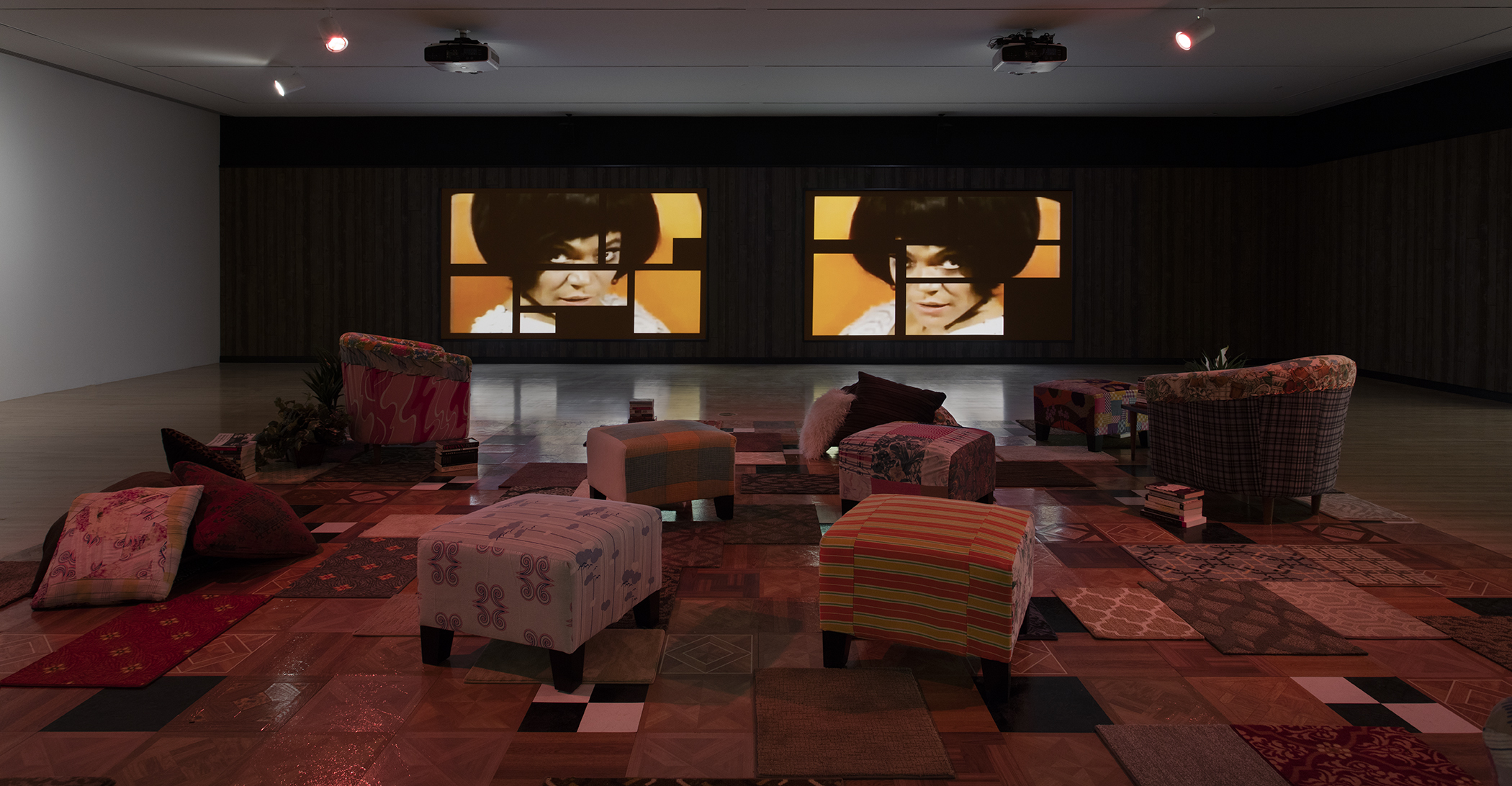 The first thing you notice are the voices. A myriad of voices, running into and across each other. Next, are the images, which appear on two large screens, the multitude too abundant for the parameters of one. They are part of a video running on a loop. At the climax of the reel, a clip of Adele Givens’ performance from HBO’s Def Comedy Jam captures the comedian asking the prescient question, “Do I look like a fucking lady or what?” This clip cuts into another popular image, which cuts into another, sometimes haphazardly, sometimes in sync. The images shift and shuffle, sometimes distorted by video tracking, but the soundtrack remains the same—a mix of comedic soundbites, dramatic monologue, pop music, musique concrète and white noise—though the audio narrative rarely reconciles itself into a linear narrative. Image and music frequently collapse into each other, a welcoming disorientation.

Mickalene Thomas’s exhibit “Do I Look a Lady?” investigates the notion of black female subjectivity through the lens of popular media. Within the popular American imagination, black women are often portrayed as fitting within a set of types—hyper-fiery, hyper-sexual, or hyper-matronly. These archetypes are largely a product of the art produced within our hegemonic culture. 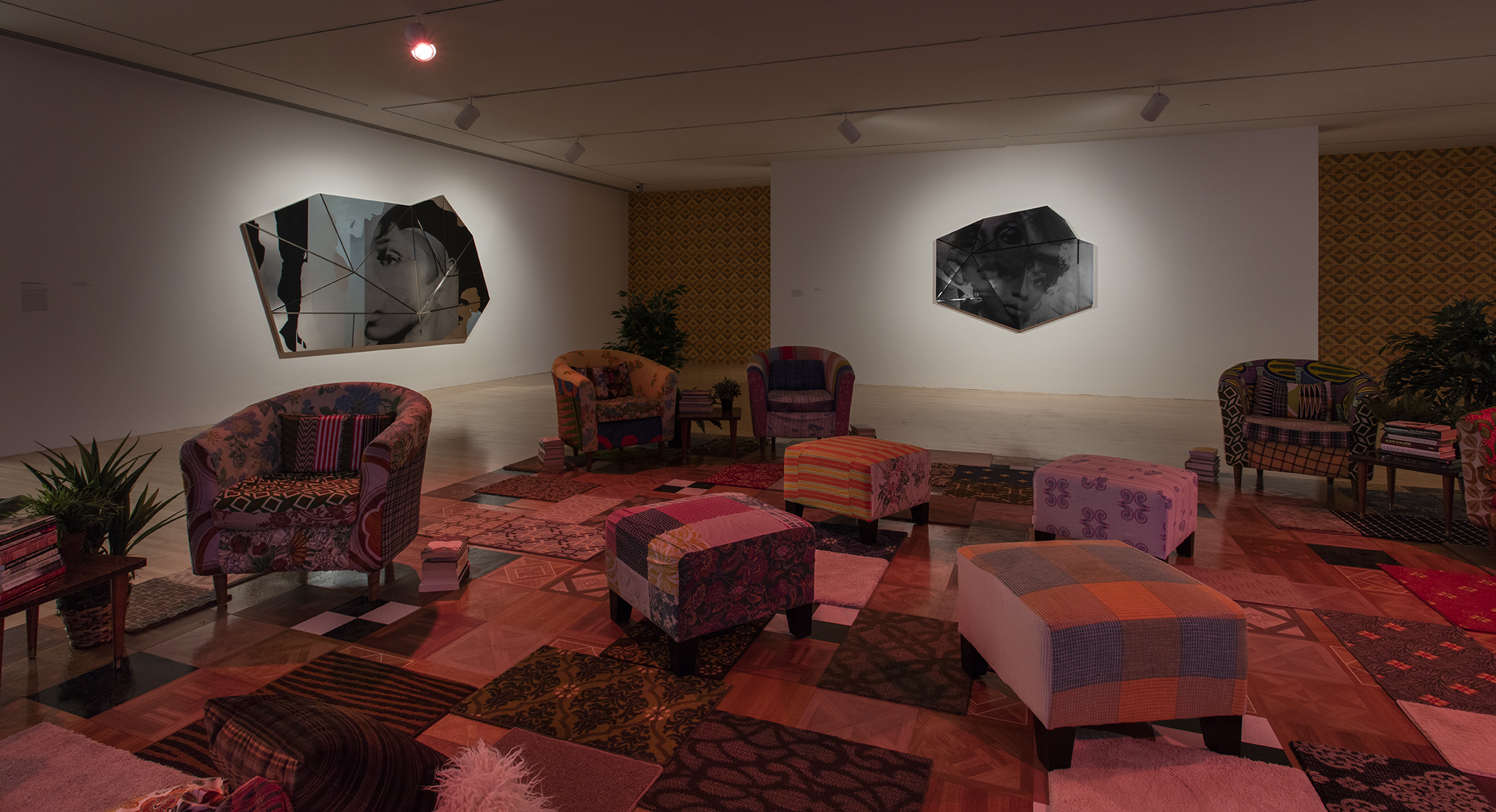 What Thomas’ exhibit communicates, however, is that black women have always been a multitudinal force within popular culture. Through her video art, she creates a circular narrative that threads together disparate icons ranging from Josephine Baker, Mo’Nique, Whitney Houston, Pam Grier, Whoopi Goldberg, and Eartha Kitt. Thomas’ chosen icons ruminate about love, sexuality, self, beauty and gender expression through dance, comedic stand-up, movie stardom, and song performance. Her mixed media portraits of singer Diana Ross and supermodel Naomi Sims play with ideas of beauty, the self and the gaze through their angular shapes and acrylic finishes. At the center of the exhibit rests a living room set meant for the viewer to sit on while absorbing the myriad of media within the room. The furniture itself exemplifies the artist’s aesthetic—warm, colorful, a dynamic mix of patterns that are evocatively Afrocentric. Around each furniture set piece, Thomas has curated potted ferns and stacks of books from a range of authors, such as Angela Y. Davis, Edwidge Danticat, Audre Lorde, bell hooks, and Toni Morrison. The lights within the room glow dimly, in red and orange hues.

What makes this experience radical (and welcome) is that it derives from the absolute agency of black women. Although Thomas takes her image and audio from our pop culture landscape, the way she orchestrates these images into a patchwork narrative, similar to the patchwork-patterned furniture at the center of the exhibit, causes the viewer to look deeper, and look again. We are familiar with these cultural icons and their associations, but Thomas’ exhibit asks whether we understand the nuanced ways in which black women express their womanhood, their Blackness, and their femininity. In this way, Givens’ question to the Def Jam audience becomes less of a question and more rightfully a display of confident, assertive rhetoric.