“Gun rights rally at Thompson Center on Friday” by LevoisJ is licensed under CC BY-NC-ND 2.0

Image Description: People protesting for gun rights and holding up two signs, one of which reads “Carry-permits now!,” the next “Fight crime shoot back.”

With the protective effectiveness of guns faring quite low statistically, the overwhelming cisgender male ego pollutes the hotly-debated topic of gun control. Harvard refers to the overestimation of guns utilized in legitimate self-defense cases as the “‘false positive’ problem.” In fact, most criminals who had been shot in their lifetimes were actually shot as victims of assault, robbery, or were caught in a crossfire and not by “law abiding citizens” with protective weapons. Therefore, using the overestimation of events wherein guns were used in self-defense to support a pro-gun agenda actively ignores basic statistics.

Arguably, the least surprising pulled statistic found that almost 90% of surveyed criminals in the study had noted a preference “to live in a world without easy access to firearms”—which includes access for themselves. Consequently, Harvard research supports the inherent lack of need for a gun, and found pepper-spray or a baseball bat to be comparable and effective weapons of protection against property crime.

With the support of Harvard on the relative ineffectiveness of guns for protection, unpacking the ways the cis-male ego upholds the availability of these weapons is crucial. 86% of gun deaths were at the hands of men in 2019, 96% of mass shootings since 1982 were committed by men (excluding San Bernardino although it did involve a man), and men are three times as likely to own guns than cisgender women. Worth noting is the overwhelming percentage of gun owners and of pro-gun enthusiasts are white cis-males.

This mass disproportionate use and ownership of guns has not gone without notice of the National Rifle Association (NRA). On many occasions, the NRA has weaponized this disproportion in attempts to lure women into increasing their use and purchase of firearms. The NRA targeted women on International Women’s day, encouraging them to “empower themselves” with guns. Being patronized is so empowering.

The pattern of this barbaric attachment between the cis-male ego and the symbolism of guns is centered in a patriarchal desire to consolidate the power of fear. The fragility of modern manhood rests on physical and emotional tools of violence—guns. In fact, language surrounding the discussion of guns is often coded language that paints the white man as the rightful and “law-abiding” citizen that will uphold and protect the Second Amendment. The thinly-veiled misogyny and racism when talking about protection from the “other” is a clear gateway to violently upholding the white-supremacist patriarchy. This protection, however, is important to analyze when according to statistics, it is women and children who predominantly fall victim to gun violence perpetrated by men. Both women and children have been capitalized within the gun market as damsels in distress for the cis-male gun to save. When the weaponry is used on those damsels, however, who—beyond the cis-male ego—is actually being protected?

If guns were utilized for their promoted purpose of protection, it is then women, who face the brunt of violent crimes, that should be armed. But in cases where a gun is in a household—even at the hands of a woman—research indicates “women with access to firearms become homicide victims at significantly higher rates than men.” 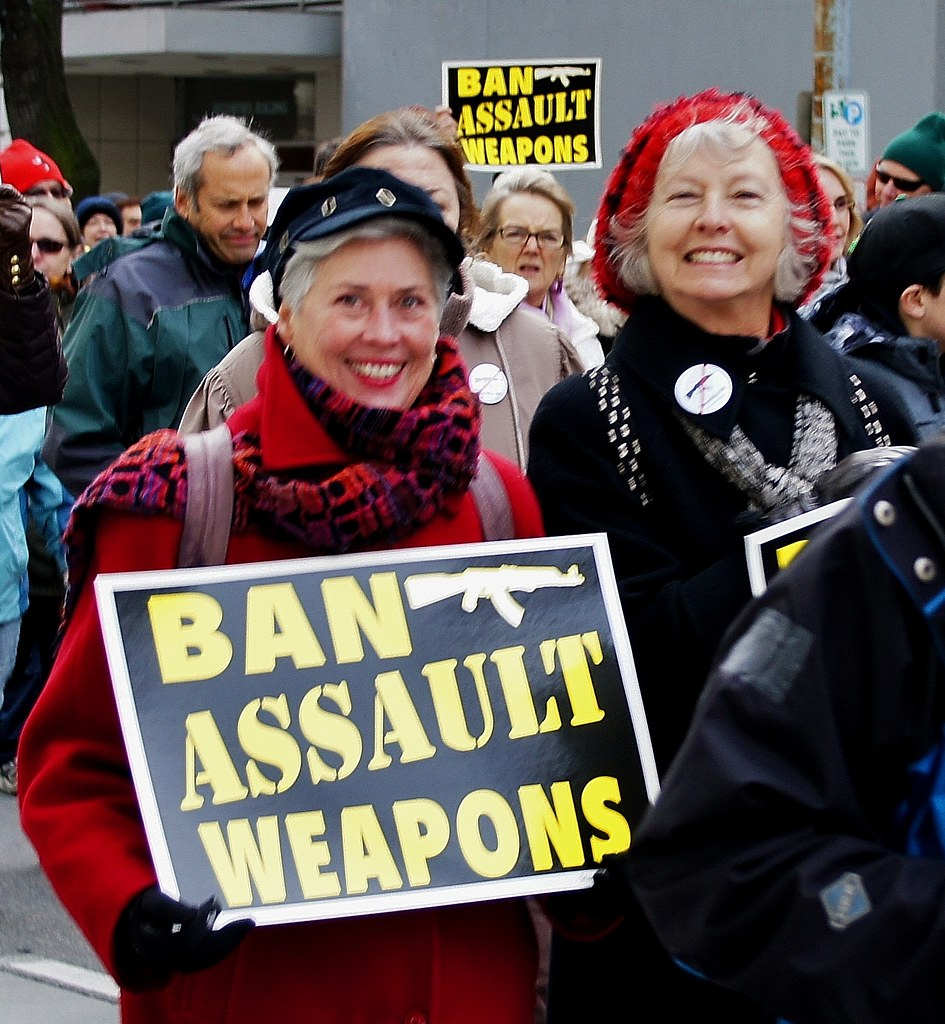 “Smiling Ladies for Gun Control” by sea turtle is licensed under CC BY-NC-ND 2.0

It comes as no surprise that the National Coalition Against Domestic Violence found the mere presence of a gun within a home plagued by domestic violence to increase the chance of homicide by nearly 500%. The likelihood of American women to be killed by intimate partners is higher than murder “by any other type of perpetrator.” This phenomena of femicide disproportionately impacts women of color, and 2003 research found it to be “the leading cause of death” for African American women aged 15-45 years of age. As domestic violence disproportionately targets women, guns continue to serve as tools that arms the cis-male ego and leave nearly millions subject to its looming violent power. In just one year alone (2013), men murdered over 1,600 women. It is an obvious discovery that within these cases, the murderers had most commonly utilized a gun to carry out their crime.

According to a 2016 article, it is the specific utility of a gun that makes them unique as they are easier to acquire than a passport, a driver’s license, divorce, and a puppy. The symbolic patriarchal tie between guns and masculinity stems from its constitutional roots and makes a gun a structural tool pioneered by the founding fathers which historically speaking, were not concerned with the individual “right to bear arms” in the modern interpretation in the slightest.

Guns are empirically utilized for men to harm and kill women and to protect the brittle cis-male ego.

A culture of showcasing control, strength, and physical power at the forefront of masculine identity has allowed guns to serve as a way for men to purchase a sense of strength that conceals their insecurity. It is therefore no surprise that negative traits like impulsivity and aggression found within cisgender men has correlated to acquiring firearms. A generational internalization of men as beacons of societal security creates an environment for them to obtain not only a violent tool that provides a sense of value, but a vicious ego.

I wrote this article before the heart-breaking news of the Oxford school shooting and want to take the opportunity to recognize the victims of the shooting. Rest in peace to 17-year old Madisyn Baldwin, 16-year old Tate Myre, 14-year old Hana St. Juliana, and 17-year old Justin Shilling.
A link to learn more about the Oxford shooting, lives of the victims, and messages from their family:  https://www.wxyz.com/news/oxford-school-shooting/they-were-amazing-community-reeling-after-oxford-high-school-shooting-leaves-4-dead-7-injured