It is no secret that social media can be a huge time suck and source of brainless content, but it can also serve as a platform for a new means of expression: memes. Today, some meme creators have advanced past the days of the trollface and Bad Luck Brian and forged a path into the previously unexplored territory of feminist memes. Meme creators on Instagram, each with follower counts in the tens of thousands, have taken advantage of social media to start conversations about important issues such as politics, social justice, feminism, and mental health. In this corner of Instagram, carefully crafted memes are so poignant you don’t know whether to laugh or cry. Feminist meme creators manage to utilize an unusual medium to create true works of art that are not just superficially funny, but uncannily relatable and piercingly honest. 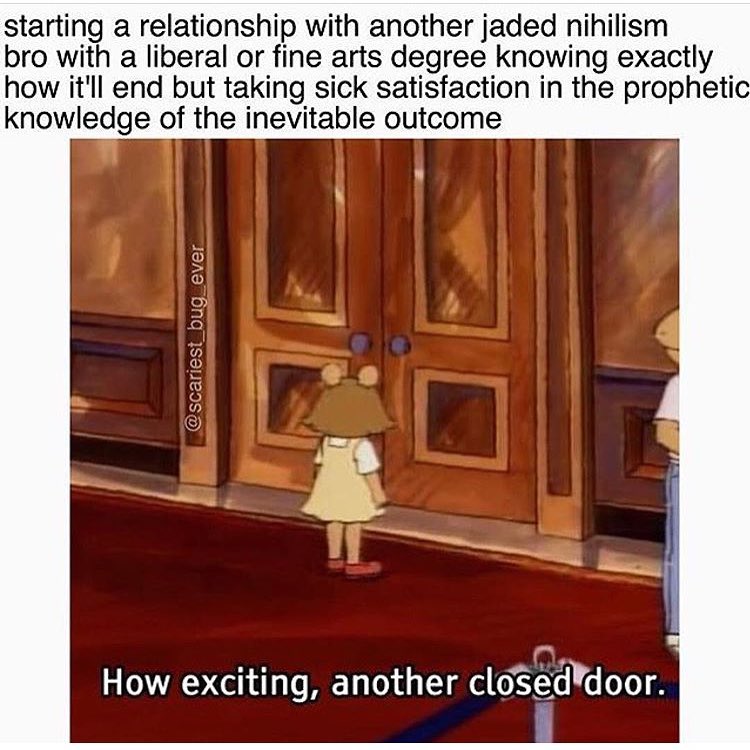 Junior High, a community art space in Los Angeles, currently has a  “meme-centric art show” on display. Curated by Instagram meme creator @ka5sh, this show features work by @scariest_bug_ever, @gothshakira, @bunnymemes, @sensualmemes, @tequilafunrise, and @versace_tamagotchi,centered around the theme of empathy and coping. The pieces in this exhibit show how the internet functions as a method of expression and source of relatability for content creators and followers alike. The opening night on February 10th drew a huge crowd, with a line down the block just to get inside and hundreds never even making it into the exhibit before it closed for the night. The popularity of this event proves that memes can be an art form worthy of a gallery exhibit.

Poet, educator, and activist Cesar A. Cruz once said, “Art should comfort the disturbed and disturb the comfortable,” and a good meme does exactly that. Feminist memes are intended to make a point, not just gain a cheap laugh. The combination of brief text and images can be particularly poignant when trying to convey a point concisely but with the greatest impact, resulting in content that others can easily relate to. Artistic value is found in this ability to act as a powerful form of social and political critique. As in the meme below created by @bunnymemes, a meme can reference an idea such as emotional labor that perhaps some people have experienced but never put a name to. It is comforting to see the idea presented in a meme because it shows that others have similar experiences. This meme also serves to alert men to the emotional labor expected of women, so that as they become more aware of how it functions in everyday life they will work to burden women with it less. The seemingly absurd image manages to personify something that many women have only ever felt, but not vocalized. 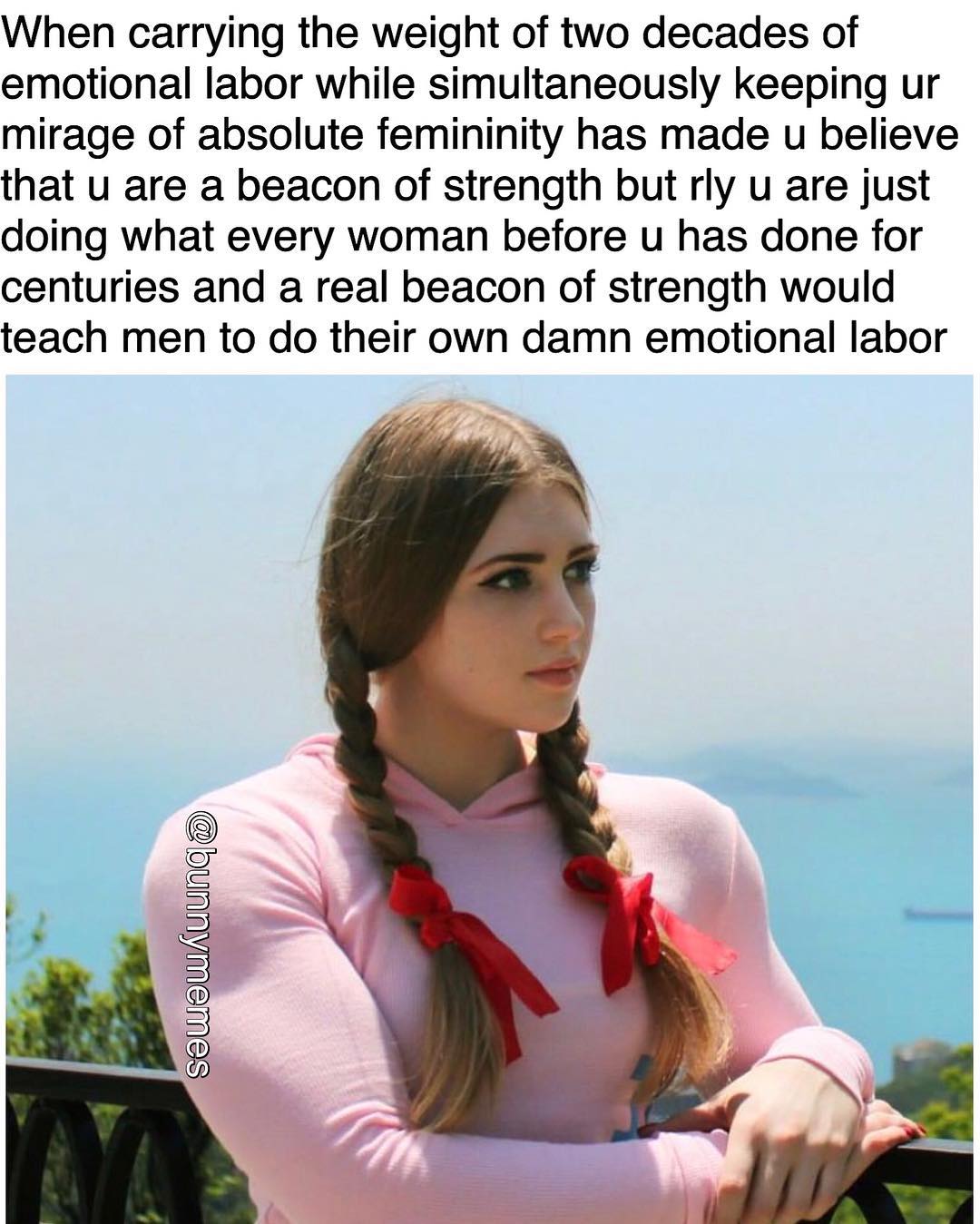 Nontraditional mediums such as beat poetry, feminist poetry, zines, punk music, and murals of the Chicano Movement have all been utilized to critique society and express the values of a movement. At their start, none of these art forms were given serious attention by mainstream society, yet they are now respected as legitimate forms of expression. If memes seem to be a more drastic departure from traditional art mediums, it is because they represent a shift in values and aesthetics in our increasingly technological age. While they may appear simplistic, many feminist memes convey nuanced analyses of contemporary culture and politics.

Through expressing thoughts and emotions and allowing others to relate to them, memes are able to help both the creator and their followers empathize and cope with shared experiences. Experiences related to anxiety, depression, and other mental illnesses are common subject matters, both through memes and personal photos posted with captions used to vent about feelings or experiences. By being so open about their mental illnesses, many meme creators are helping to facilitate discussion about an issue that is often ignored or stigmatized by society. 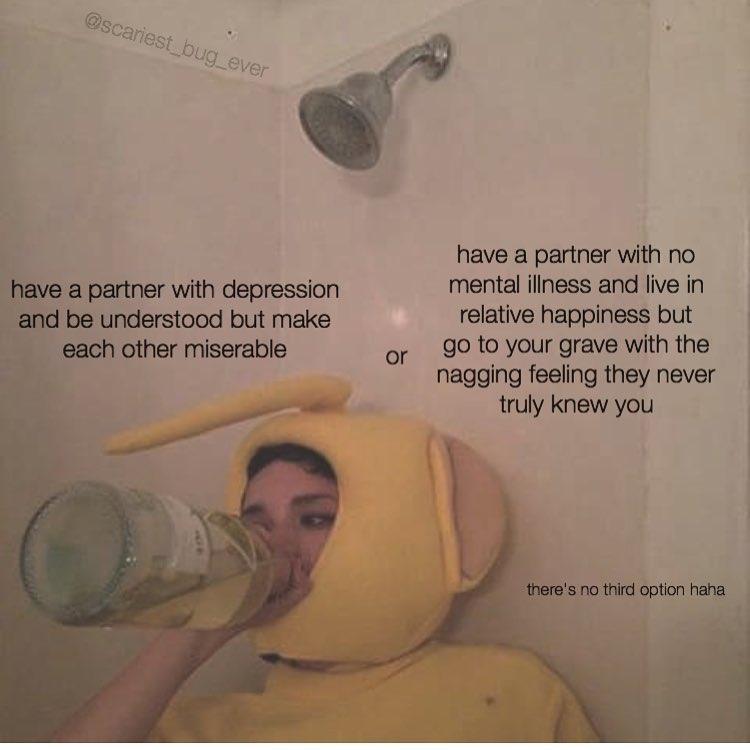 This sort of content does warrant the critique of whether it contributes to the romanticization of mental illness. While this is a valid concern, ultimately meme creation is a coping mechanism for the artists, just as other forms of art can be a coping mechanism for others. It allows them to speak about their illness rather than hide it, and see that there are others out there with similar experiences, which can help their followers cope as well. It is important to support those coping the best they can, while still being aware of the potential for these memes to be problematic.

Some feminist memes are created to voice complaints about current and past relationships. The skater, music, and art boy tropes prevail as the sort of men that the meme creators are attracted to, yet never feel fulfilled by due to their lack of both self-awareness and respect for women. These memes have helped create a discussion about the struggles surrounding both emotional intimacy and emotional labor, and the search for a balance within both romantic and non-romantic relationships with men. 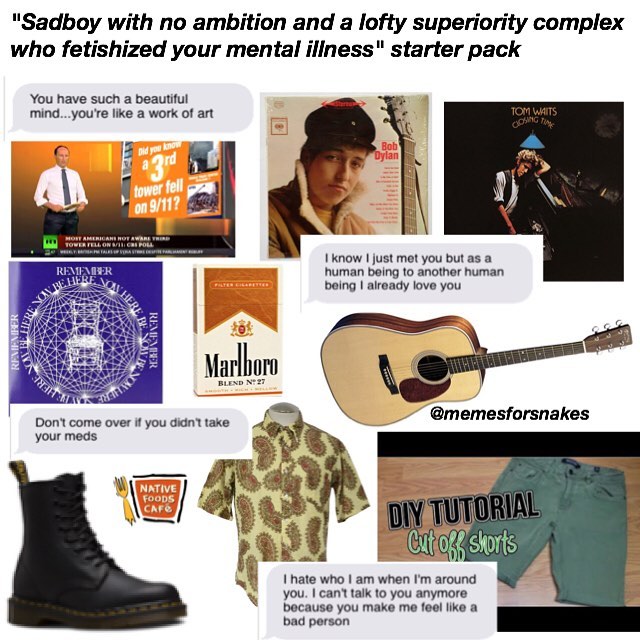 Memes are also used to address the very serious issue of sexual assault by “nice guys.” This sort of content is vital to the discussion about sexual assault, as it is all too common for people to be against sexual assault in theory, but lose their values in favor of defending a friend. These memes function well as a tool for bringing awareness to how misogyny functions in our society, and the amount of followers that relate to and appreciate them shows just how crucial this discussion is.

Political memes have emerged as a reaction to the current state of American politics. While memes may not be able to fix our current political situation, they can provide validation for those that are angry and hurting. They can also  expose people to different perspectives and experiences that some people may not have encountered in their own lives, allowing for a more intersectional discussion of privilege and oppression in our society. In a time when heartbreaking political news is omnipresent, the accessibility and humorous nature of memes can help keep people aware and involved, rather than disillusioned and inactive. They are also a valuable medium for voicing dissent, which is critical to ensure our government really serves the people. 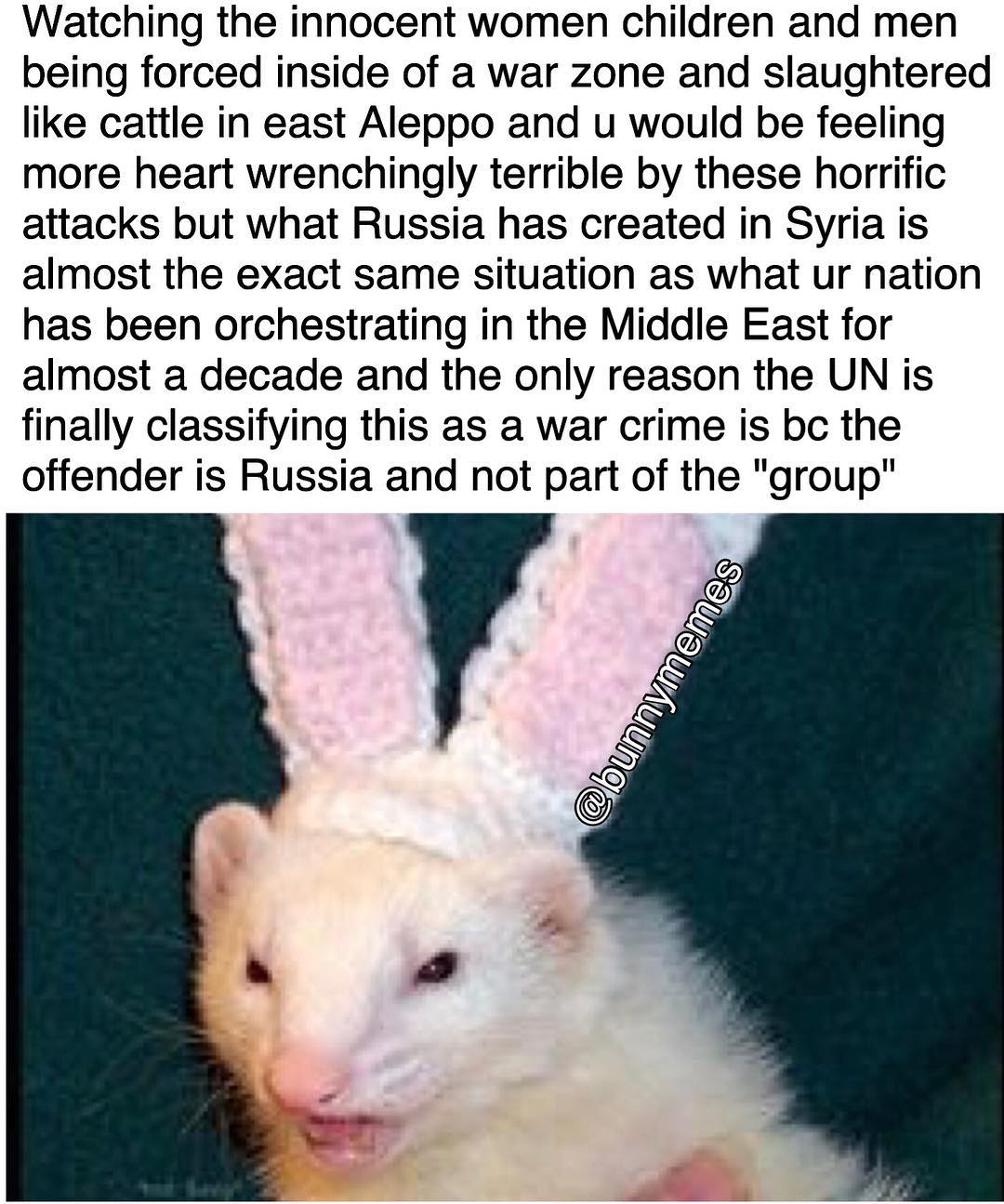 While older generations may criticize millennials for their over-attachment to technology and social media, they fail to realize that digital media allows us to create and share content that can articulate emotions, advocate for change, and build connection through shared experiences. Feminist and political memes bring attention to issues that need to be talked about, while making the discussion more accessible to a larger audience. The power of memes to foster empathy and act as a coping mechanism is a valuable resource, just as it can be in other art forms. The ability to share ideas, express emotion, and relate to each other is part of what makes us human, and memes can do this just as well as art, music, and poetry.

The Cathouse on the Sea

on eating onions raw / to make us happy