I am a huge fan of Frida Kahlo and the Surrealist movement. Ever since I was a young girl, I’ve been captivated by Frida’s free spirit, strength, and fearless approach to her art. Thus, it was no surprise that I rushed to see LACMA’s  “In Wonderland,” an exhibit that focuses on women surrealists in the United States and Mexico. Although my main goal was to have the unique and exciting opportunity to see my favorite (and incredibly famous) Frida pieces “Suicide of Dorothy Hale” and “The Two Fridas,” I realized while walking through the exhibit that I had entered a feminist wonderland.

I work at the Hammer museum and, as an art lover, regularly haunt museums. But I’ve never seen an art exhibit that resonated so much with me as a feminist. The exhibit trumpeted the notion that women are more than beautiful ornaments or objects of sexual desire and eroticism, the usual roles allotted to them in the world of visual arts. Traditional art pieces prize women for an ephemeral, transitory beauty; their bodies are consumed by the male gaze and their emotions, intellect, and creativity are completely disregarded. The surrealist women painters featured in “In Wonderland” shatter their traditional roles in the art world.

First of all, roles are reversed as they escape the frames that have bound them for centuries and take a well-deserved place behind a canvas. In these paintings, bodies are de-eroticized and an emphasis is placed on female emotions and their creative potential. They flee to the world of dreams, where they become free and explore their emotions. Indeed, despite the pervasive presence of nude females in the exhibit, these bodies are far from more sensual traditions of the female form; it’s a far cry from Manet’s sexy and provocative Olympia. Body parts are scattered and become sites of intellectual discourse, not sensual pleasure. Indeed, the portrayed women in “In Wonderland” are de-eroticized in order to finally humanize them on the canvas.

The treatment of the female body was extraordinarily fascinating, but the overarching post-structuralist feminist message that the exhibit was touting was even more liberatory. The portrayal of female identity was refreshingly modern. Paintings that depicted issues of identity stressed the multiplicitous nature of identity. Women are not trapped in the traditional roles of obedient housewife, doting mother, loving wife, enchanting muse, or alluring mistress. Indeed, they can embody all of those roles, if they wish. The painters of “In Wonderland” convey the message that gender (and identity overall) is merely a performance. Thus, these women are not only freed from the confines of their bodies, perpetually objectified and hyper-sensualized by the predatory male gaze, but identities impinged upon them by society. At first glance, many of these paintings may appear to be a result of an identity crisis (and that very well may be true!), but a closer examination will reveal that these women are toying with their identities and exploring a duality, or even a multiplicity, that exists within them. Many paintings denounce domesticity and depict the tension between the roles of artist, mother, and wife.

Here are some highlights from the exhibit that explore these themes: 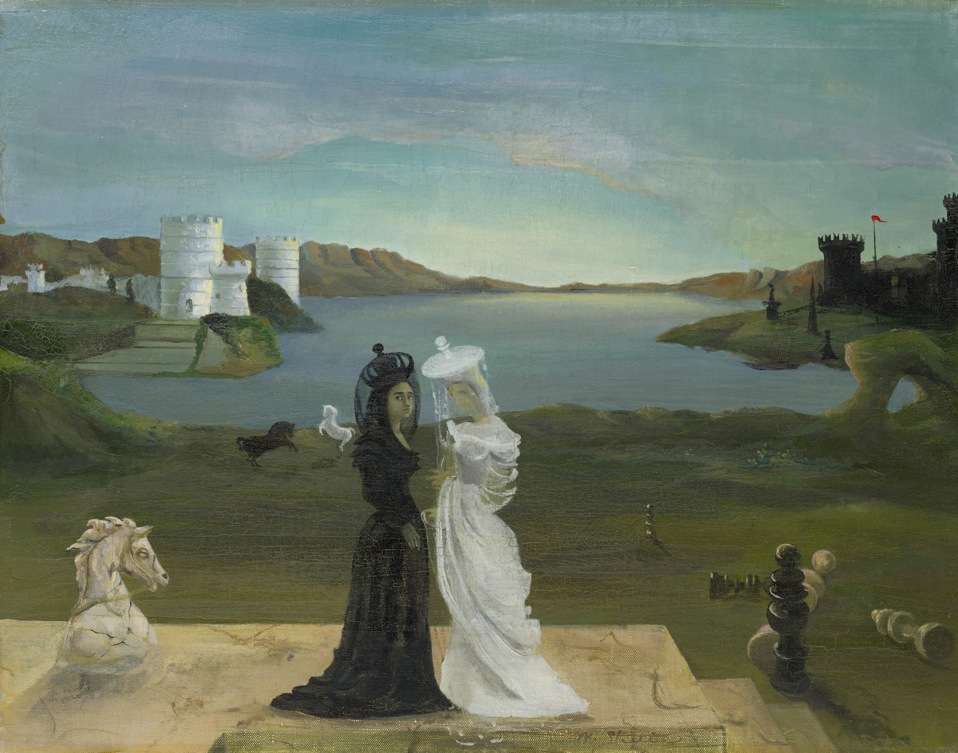 “The Chess Queens” by Muriel Streeter

This painting may call to mind several motifs and tropes. One may think of the female stereotypes expounded in the 2011 film “Black Swan” or even the biblical dichotomy of the Madonna (Virgin Mary) and the Whore (Mary Magdalen). This painting destabilizes these binaries. For example, the black castle is behind the white queen – their roles and identities are interchangeable and are not fixed. 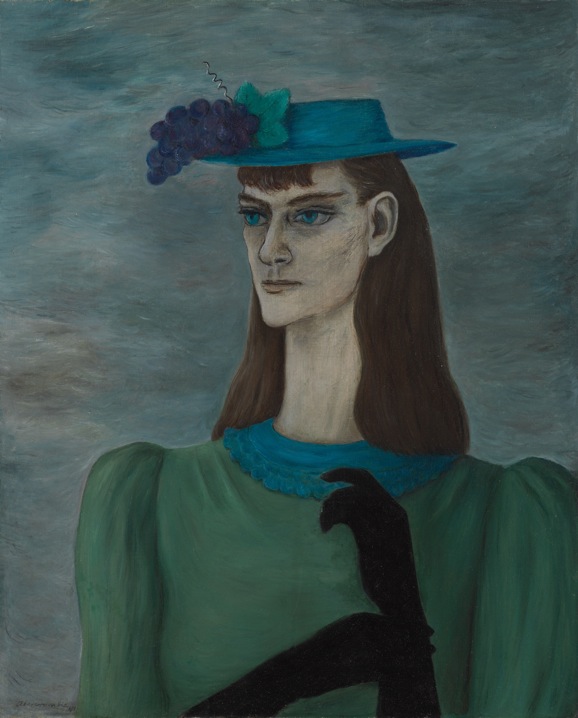 “Self-Portrait of My Sister” by Gertrude Abercrombie

I ended up becoming a huge Gertrude Abercrombie fan after seeing this exhibit. In this painting, the eccentric Chicago painter gave her self-portrait a rather unusual name. Abercrombie had a twin, but the title speaks to “the Other” that exists within all of us. Here, Abercrombie is not only embracing duality, but exploring performative identity. The blues of the painting emphasize the emotional content of the painting. This was my favorite piece of the exhibit. The painting is a witty commentary on the traditional and essentially predatory depictions of heteronormative courtship in paintings, literature, theater, and other forms of art. The painting not only slyly lampoons traditional romance, but also reveals a darker message of the power that many men hold in relationships. 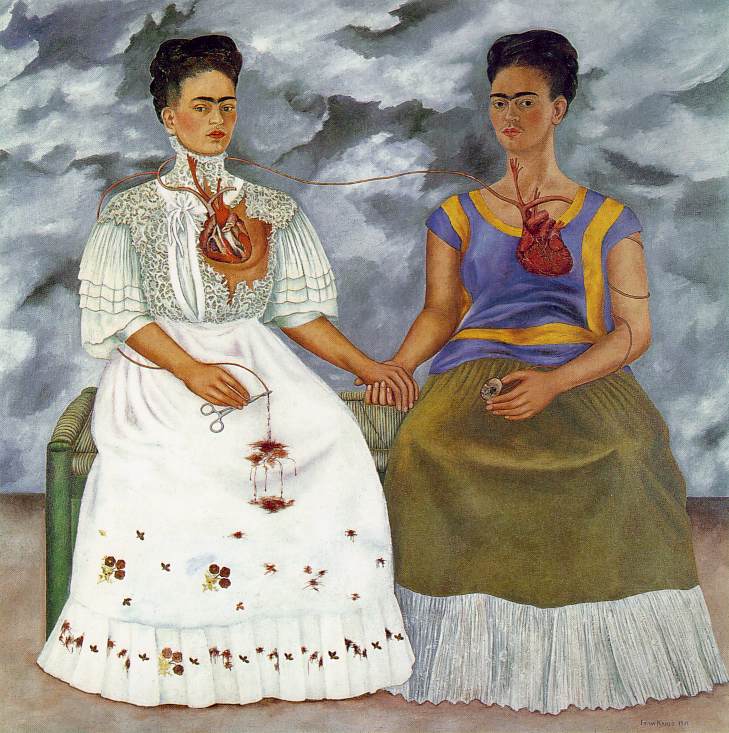 “The Two Fridas” by Frida Kahlo

This huge canvas by Kahlo is the highlight of the exhibit – many visitors vied for a spot in front of this emotionally overwhelming piece. Here, like her contemporaries, Kahlo also explores duality and identity. The painting is a manifestation of Frida’s tension between her  Mexican roots and identity as a burgeoning successful artist after an exhibit in Paris. On the right, Frida is dressed in traditional Mexican garb and on the left, she is wearing a white European costume. However, more importantly, the painting tells the story of an identity crisis resulting from heartbreak, betrayal, and a haunting obsessive love. The painting was done after her divorce with the artist Diego Rivera, with whom she was madly in love. A childhood photo of Rivera is seen in the hand of the Frida on the right.

The “In Wonderland” exhibit runs until May 6, 2012. Due to the fact that women are often ignored or play a minor role in Surrealist discussions and exhibits, “In Wonderland” is a unique opportunity and must-see! Tickets are $20.