Picture a little girl walking around New York’s Metropolitan Museum of Art. As she looks at the paintings and sculptures around her, she sees that most of it was created by men, but most of the nudes are of female bodies. What effect will that experience have on how she sees herself?

The art world has a representation problem. In our culture, we have designated museums as the space for the highest-quality art in the world. As a result, museums define our understanding of what kinds of art, artists, and, consequently, lives, are considered worthy of our attention and praise.

Art by women makes up only 3-5% of the major permanent collections in the U.S. and Europe, even though women earn half of the Master of Fine Arts degrees granted in the U.S. In New York City’s art galleries, 88% of the American artists are white. Queer people’s work is systematically erased from museum spaces, like in 2010, when the Smithsonian Museum removed an LGBT art exhibit after the GOP threatened to defund it.

Representation in the art world matters not only because it is fair to showcase work from different groups of people, but also because the images we repeatedly see have a profound effect on our psychology and our society. Sociologists use the term “symbolic annihilation” to refer to the subtle violence that takes place when we erase groups of people from our media and art. What we see over and over accumulates in our brains and shapes what is seen as normative or good. According to Ana-Christina Ramón, assistant director of UCLA’s Center for African American Studies, “[v]isual media teaches us how the world works and our place in it.”

Art can serve as a vehicle for self-expression as well as a tool for communicating political and philosophical ideas. When we restrict who gets to publicly express themselves through art in spaces that are considered “prestigious,” we lose out on the richness of perspectives and experiences that different kinds of people have to offer.

Since white, straight, cisgender men get to occupy museum spaces, they also get to dictate how the bodies and experiences of marginalized groups like women and people of color are represented. For instance, judging from Greek and Roman nude female sculptures, vaginas simply didn’t exist during that time period. All of these sculptures of female bodies have “genitals” that look absolutely nothing like real human vaginas; between their legs, there is simply a hairless, smooth triangle with no indication of a vulva, pubic hair, or protruding labia. On the other hand, penises are documented in great detail on the male nude sculptures. 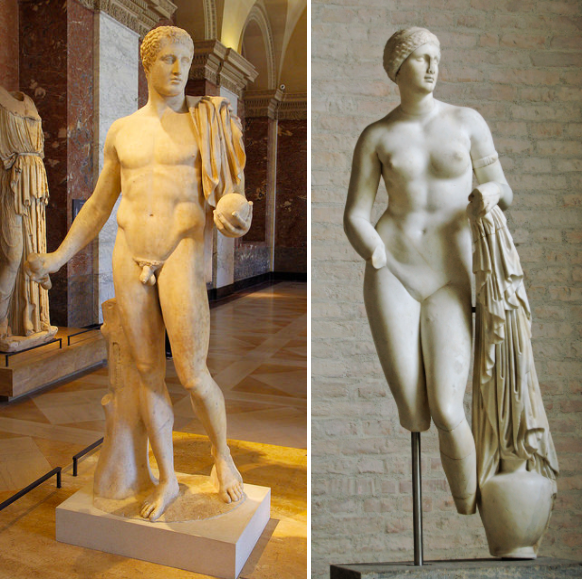 Photos by Ken and Nyetta via Flickr / CC BY 2.0; Bibi Saint-Pol via Wikimedia Commons / public domain 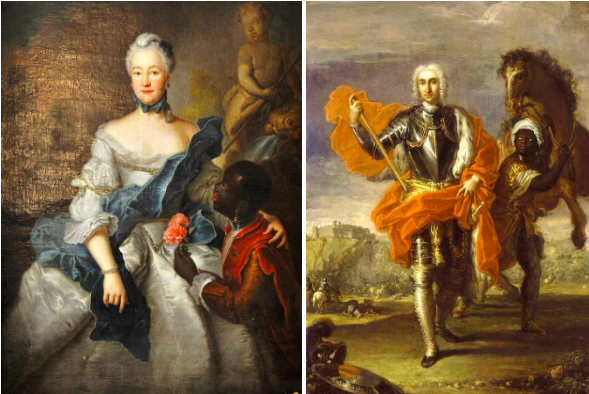 Picture that little girl again. In the Metropolitan Museum of Art, art by women makes up only 4% of the Modern Art section, yet 76% of the nudes are female. What will seeing that teach her about the world and her place in it?

While these sculptures and paintings may seem antiquated, it is too easy to say that we’re doing so much better now. As mentioned before, only 3-5% of the art in the Modern Art section is created by women. And what we repeatedly see in art permeates into all other forms of entertainment. To this day, female sexuality is more highly censored than males’; while male orgasms shown in movies typically receive a PG-13 rating, female orgasms typically get an R rating. To this day, black actors often have to play one-dimensional, stereotypical roles such as slaves, maids, and addicts in order to receive praise.

At the root of this issue lies a long history of exclusion in the art world. From the 16th-19th centuries, women were denied access to the classical training needed to become esteemed artists. During this time period, studying nude models was considered “too inappropriate” for women, so female artists were forced to create only the kinds of paintings that were considered less valuable at the time like portraits, landscapes, and still lifes. History has also devalued traditionally feminine art such as quilting, embroidery, needlework, and china painting because of their “domestic” natures, yet it assigns great value to traditionally masculine forms of art like paintings and sculptures.

The other issue at the root of this problem is that the people in power who get to decide what art and artists are valuable are also predominantly white, straight, cisgender men. Only 25% of the board at New York’s Metropolitan Museum of Art are people of color, but 67% of New York residents identify as people of color. Every single one of the nine members of the Executive Staff at LACMA is white. Only 30% of museums with budgets of $15 million and higher are run by women, and as the budgets increase, the number of women decreases even more; only three out of twenty of the largest-budget museums in the world are run by women.

Next time you go to a museum, think about how the art you’re looking at got there and what power structures influenced that decision. Some museums are already working to have better exhibits, like the Hammer Museum’s “Radical Women: Latin American Art, 1960-1985.” And lots of the best art in the world is not in museums, so seek out work from other places that represents authentic experiences. Here at the FEM Arts and Creative section, our job is to help you discover the powerful art in the world and to support all the intersectional feminist artists out there.