We look towards television for a variety of reasons. To see fantasy, to escape briefly from our realities, to see thought out plots and characters brought to life, and a lot of the times, to see a reflection of ourselves in the programs. But not everyone is reflected.

The CW, a network broadcast system that is run by CBS and Warners Brothers, recently came under fire for its usually praiseworthy representation of ethnic minorities and LGTBQ+ people.

The network was criticized primarily over “The 100,” a post-apocalyptic show set after a devastating nuclear apocalypse wiped out almost all life on Earth. It follows 100 delinquent teenagers who were sent back down to Earth after their space ark begins to fail. The issues are namely queerbaiting, the mistreatment of minorities, and the constant use of the “Bury your Gays” trope.

The biggest shipped pairing of “The 100” was “Clexa.” This included the canonically bisexual main character Clarke Griffin, and the Commander of the Grounders, Lexa, who is a lesbian. Creating this relationship in the show brought “The 100” a big boost in ratings, as many viewers were ecstatic over having a relationship between two strong, multidimensional women.

Of course many of the LGTBQ+ viewers were still wary, and rightly so, that their pairing would crash and burn. The history of dead lesbian characters in network television, including the CW’s 2015-2016 season, is overwhelming.

“Your Friendly Neighborhood Lurker” (YNFL) was a persona that was created on a lesbian safe haven thread dedicated to “The 100”. They identified themselves as straight and as someone who works on the show. This persona later revealed themselves as Shawna Benson, a writer on the show.

The biggest queerbaiting YFNL made was to reassure people on the thread that Alycia Debnam-Carey, the actress who plays Lexa, was not leaving the show after people saw she signed a poster for Jason Rothenberg, the showrunner, with the following: “Thank you for this opportunity. Jus Drein Jus Draun.”

Many fans thought this was a goodbye note to Rothenberg, and took this to mean that Lexa would be dying. YNFL, as the self-appointed rumor control, discredited the theory…. Even though at the time Shawna Benson was fully aware of the fact that Lexa would die. This was seen when Kim Shumway, another writer for “The 100”, accidentally spoiled this to Eric Goldman of IGN. 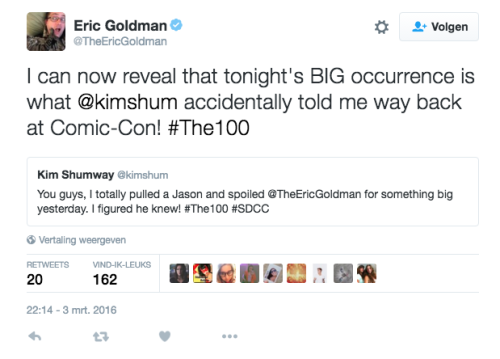 The other biggest issue with “The 100”, is the mistreatment of minorities. Ricky Whittle, a main POC cast member, has recently come forward about how he was being bullied by the showrunner Jason Rothenberg:

“At the beginning of the season, [Lincoln] had a whole storyline that was cut, that was just non-existent. [Showrunner Jason Rothenberg] abused his position to make my job untenable. What he did was disgusting and he should be ashamed. … He was professionally bullying me, cutting out all the storyline I was supposed to be doing, cutting lines, cutting everything out, trying to make my character and myself as insignificant as possible.”

Whittle’s character Lincoln was also recently killed off the show, due to Whittle speaking out about his abuse on the show. Many have considered his death to be staged in a cruel and racist manner, even by “The 100” standards. One review stated:

“Lincoln had little story of his own this season, and when he has been on screen it is more of the same mistreatment. He had a kill order placed on him, was physically attacked, arrested, interned and, finally, shot in the head at point blank range whilst chained up and kneeling in the mud.

This was not a “good death” no matter how noble his intentions were.

Glorifying the death of a peaceful black character who was shackled and left to bleed out in the dirt is not only culturally insensitive, but utterly tone deaf to the historical and political context of anti-black violence. It’s gratuitous framing (ie, a graphic shot of the bullet hole and slow motion blood spatter) sensationalizes his death in a way that moves it beyond upsetting and into the realm of disturbing.”

These are far from the only problematic dealings of “The 100”.

Most recently “The 100” also included a rape scene, among other seriously triggering scenes such as (forced) self-harm and suicide, depicted in its latest episode. Moreover, the twitter account of “The 100” writers re-tweeted a joke about it, though they later deleted it.

However all hope is not lost. This article sums up how “The 100” fandom has been fighting back against these tired out tropes. A large part of “The 100”’s fandom has withdrawn their support from the show which has caused the show’s ratings to drop.

The fandom has also managed to raise over $60,000 for the Trevor Project, which is “the only national organization providing suicide prevention services to lesbian, gay, bisexual, transgender and questioning youth in crisis.” This goes to show the courage, heart, and perseverance of all the people who took the terrible events, and turned them into something amazing.