If you ask anyone on campus, they will undoubtedly have heard of Yik Yak. Started in 2013, it is an app that allows you to post anonymous comments to a feed available to everyone within a five mile radius of you. Not surprisingly, this app has become increasingly popular on college campuses across the country, where students can post whatever they like without the fear of consequences. Of course, many of the so called “yaks” are generally harmless. Depending on what time of day you decide to scroll through, the messages range from the jokes about campus life to updates on a person’s morning bowel movements.

However, there are also many cases of much more sinister yaks, the likes of which have gotten the app a lot of bad press over the past year. In fact, some are calling for colleges to ban the app altogether. The unfortunate thing is, for every few harmless yaks about midterms and omelette lines, there is one that is degrading to either minorities, women, or both.

One of the biggest challenges feminists face today is combatting critics who question their purpose. Most commonly, these critics argue that women are already equal, and any attempts to improve women’s position in society is an attempt to make women superior to men–hence the widespread “man hating” stereotype that plagues feminism today. However, this criticism relies on the notion that women are already equal–that women enjoy the same social status as their male counterparts.  Well, it only takes a look through something like Yik Yak to show how strong the need for feminism still is.

Some of the most common Yaks I have seen are from people making fun of women’s bodies: 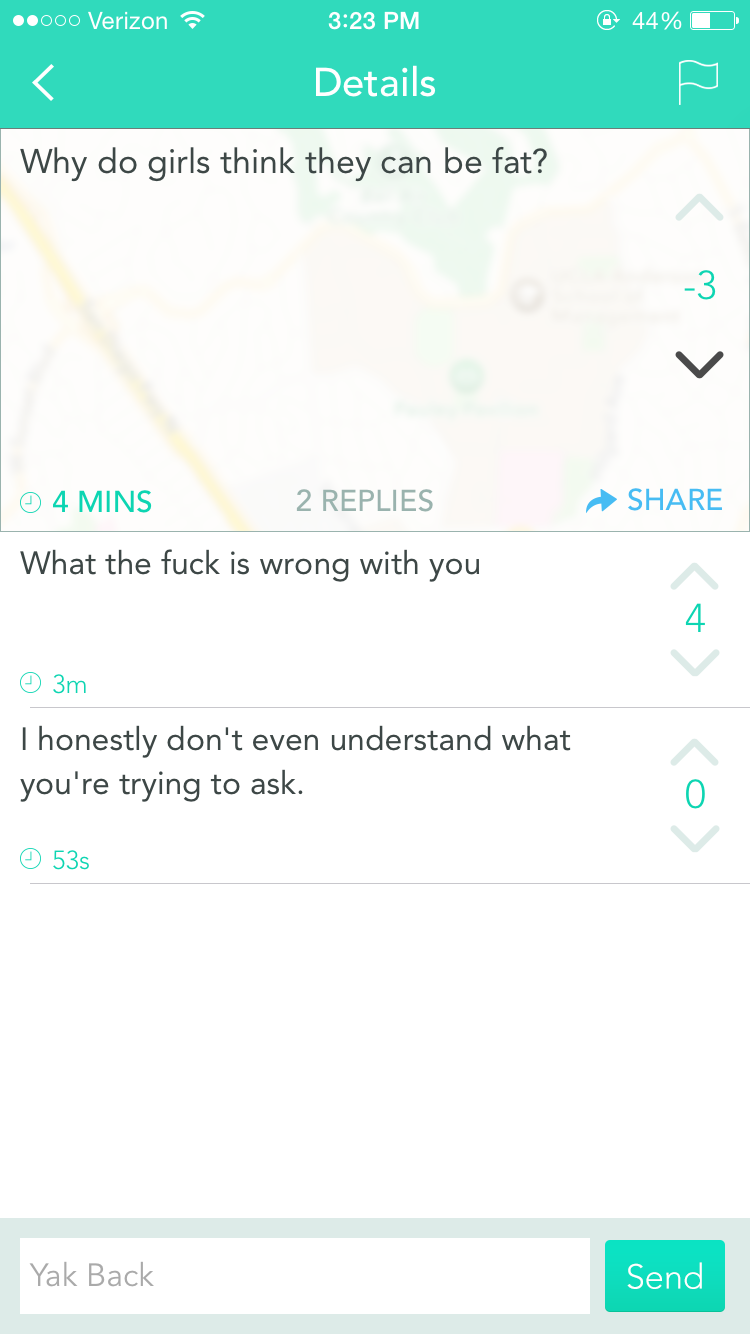 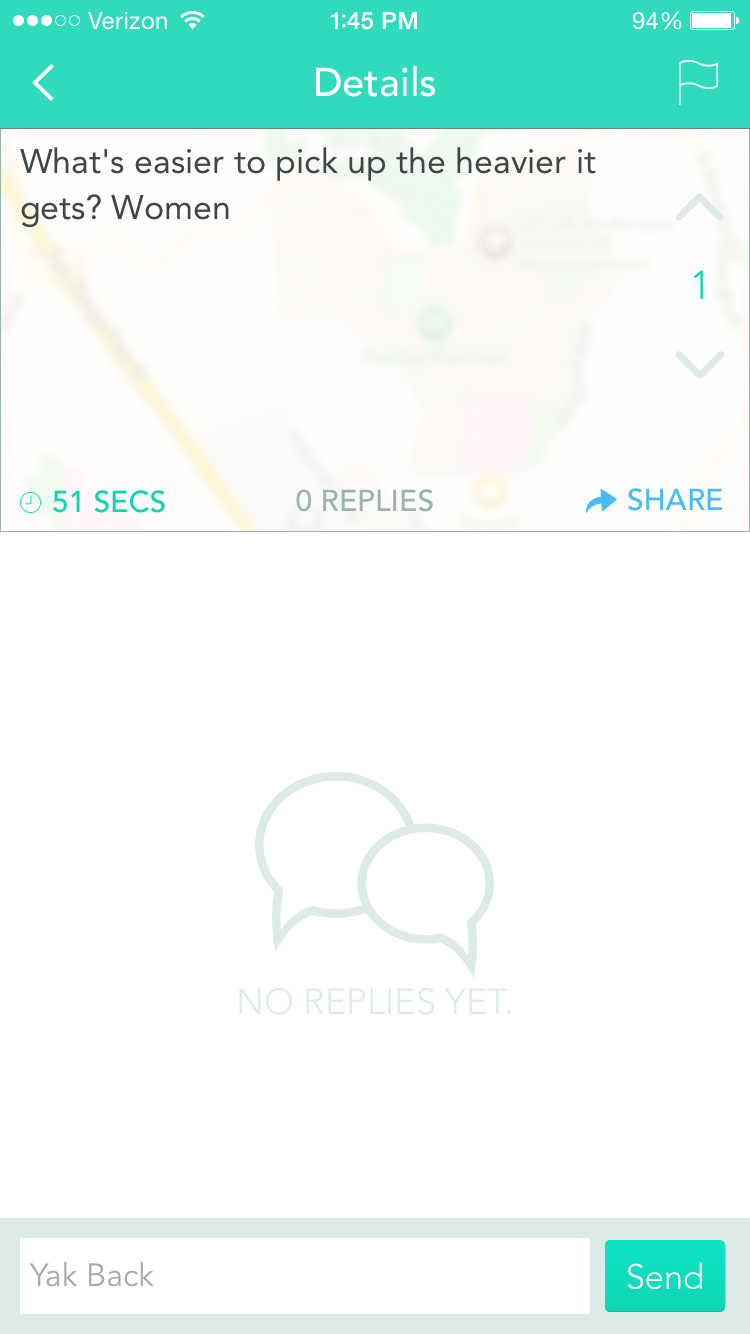 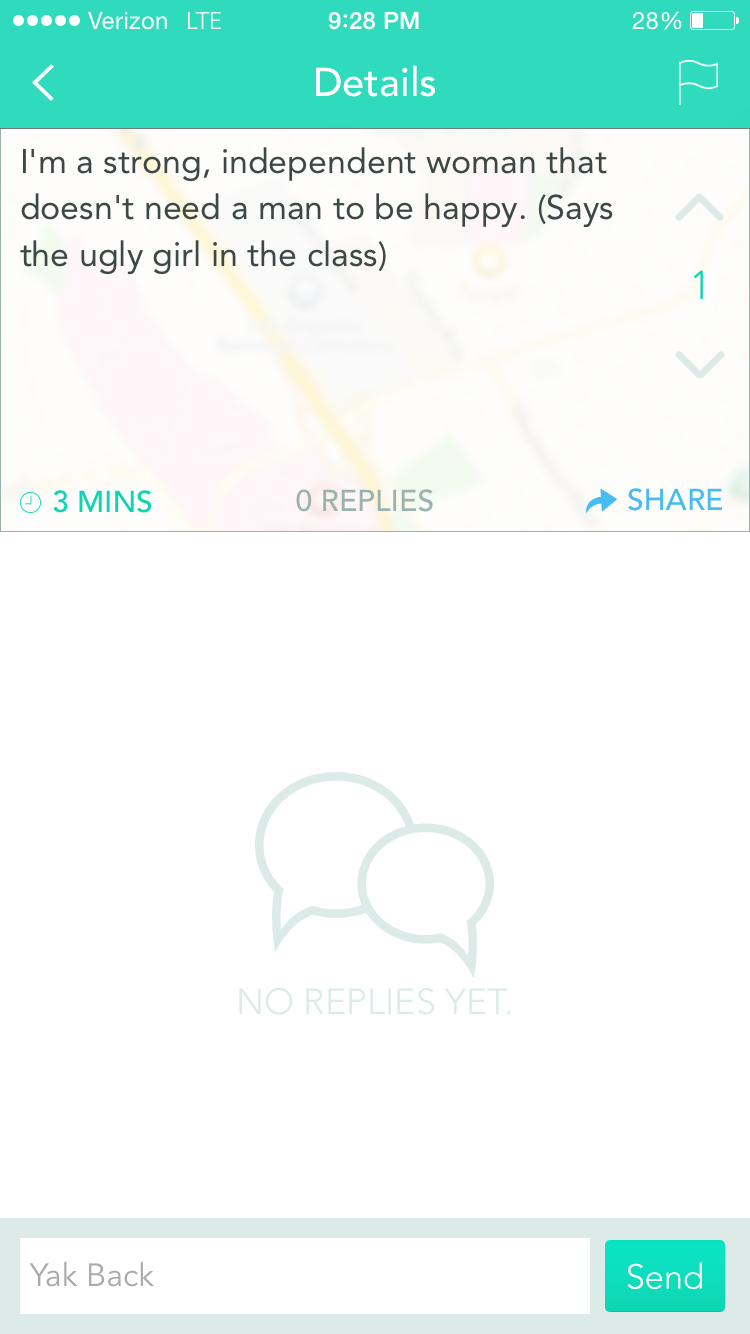 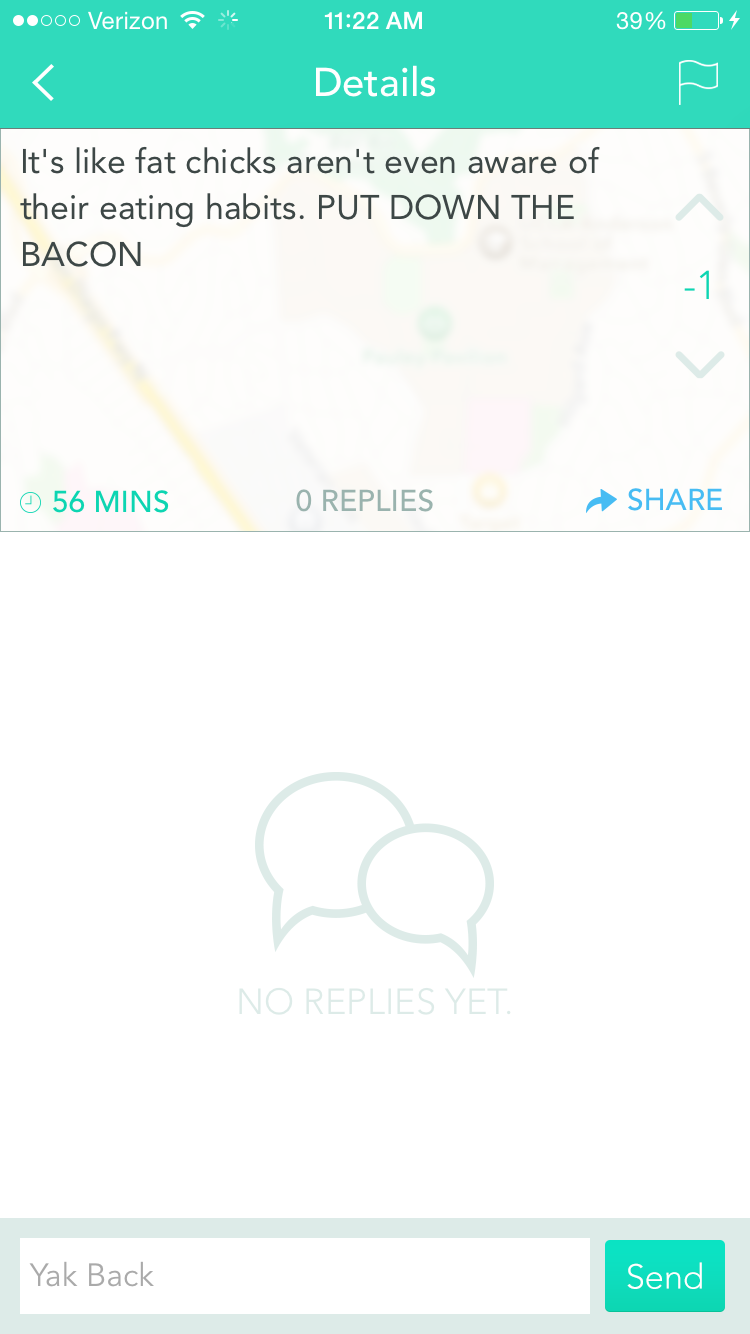 Others find humor in making fun of women’s intelligence or questioning their overall worth: 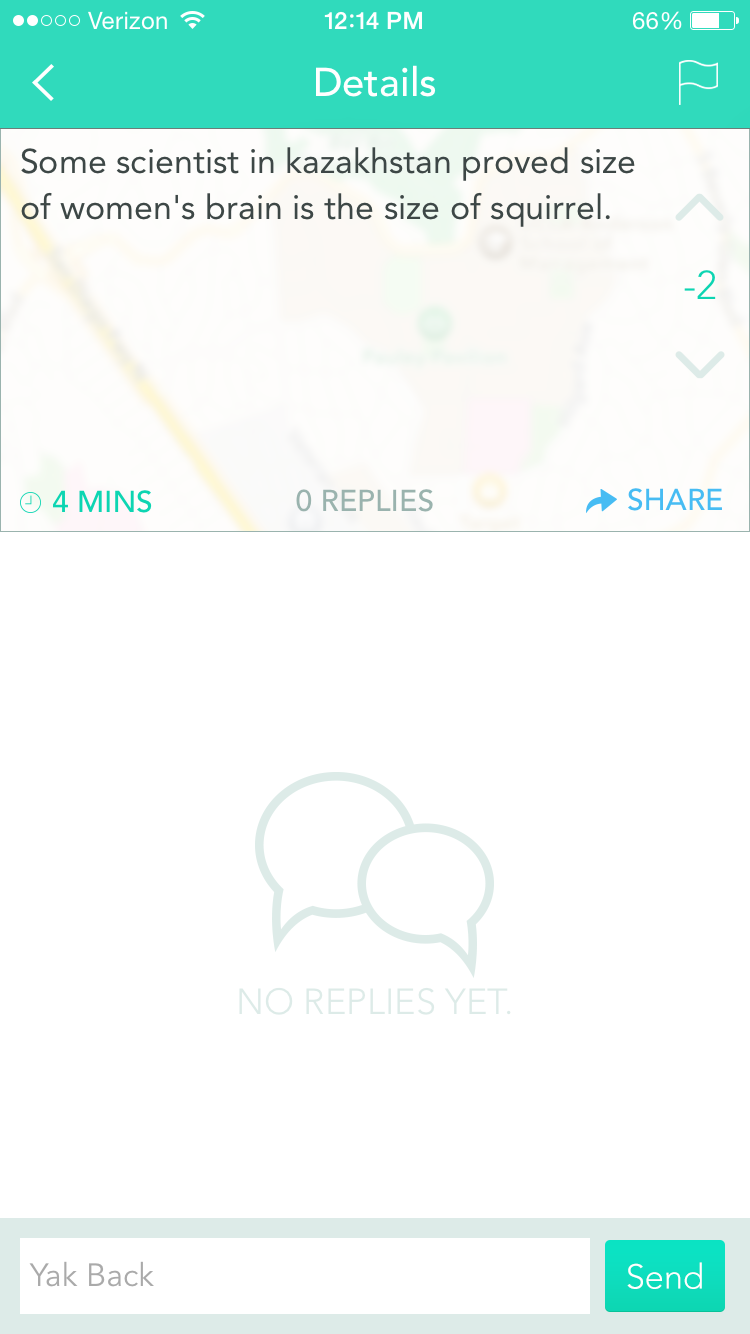 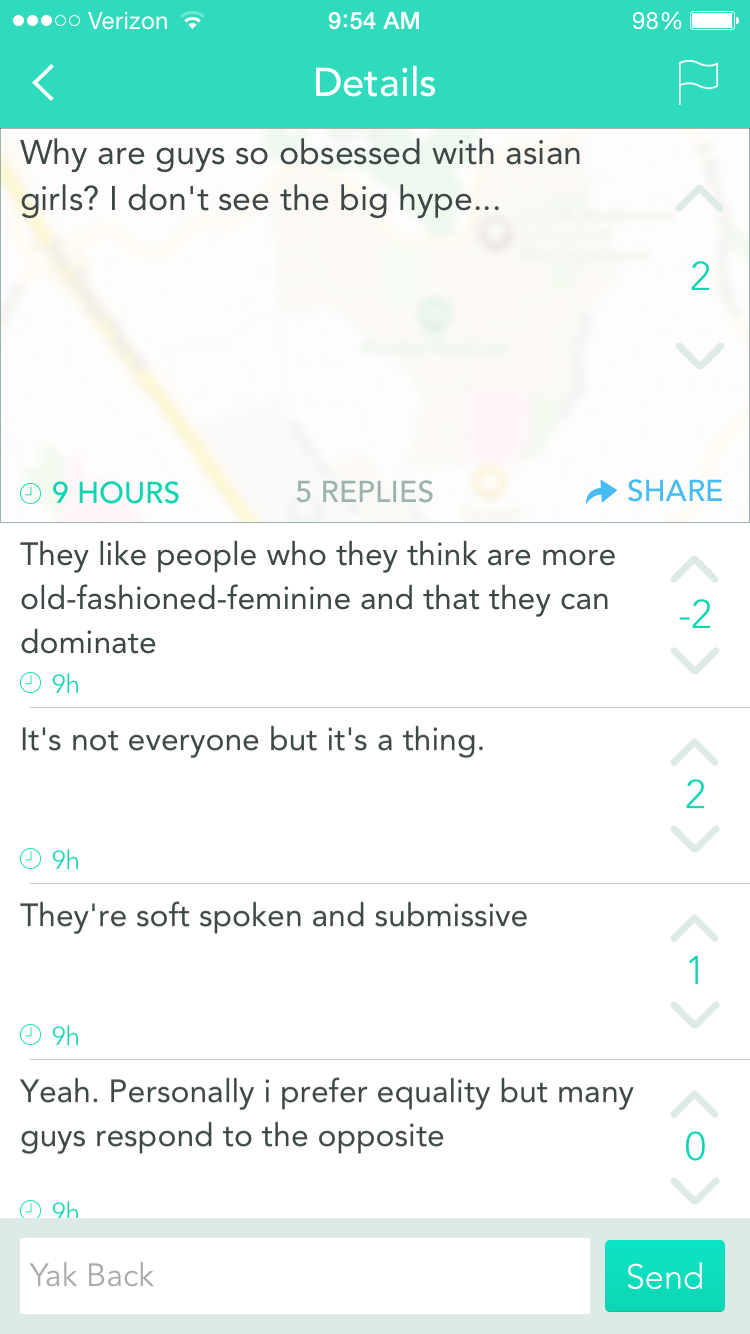 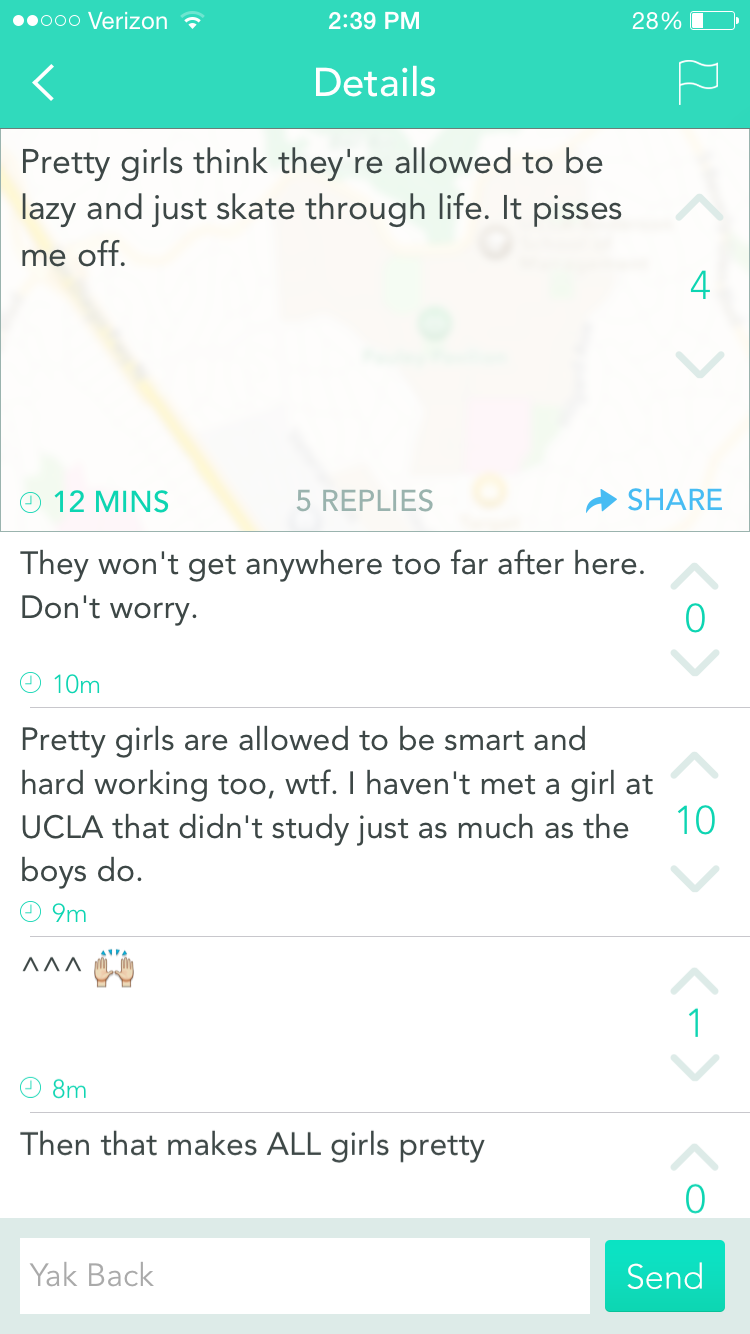 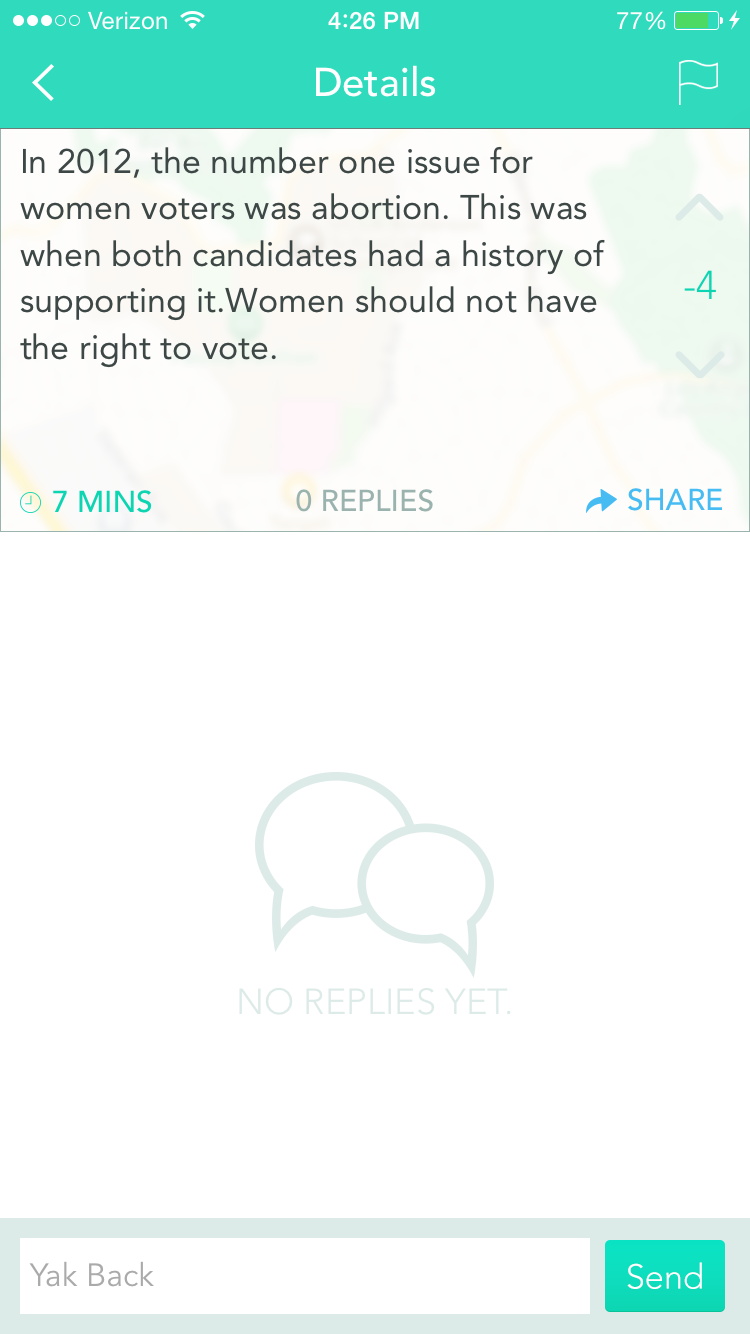 More still turned to Yik Yak to call out all of the “sluts” on campus: 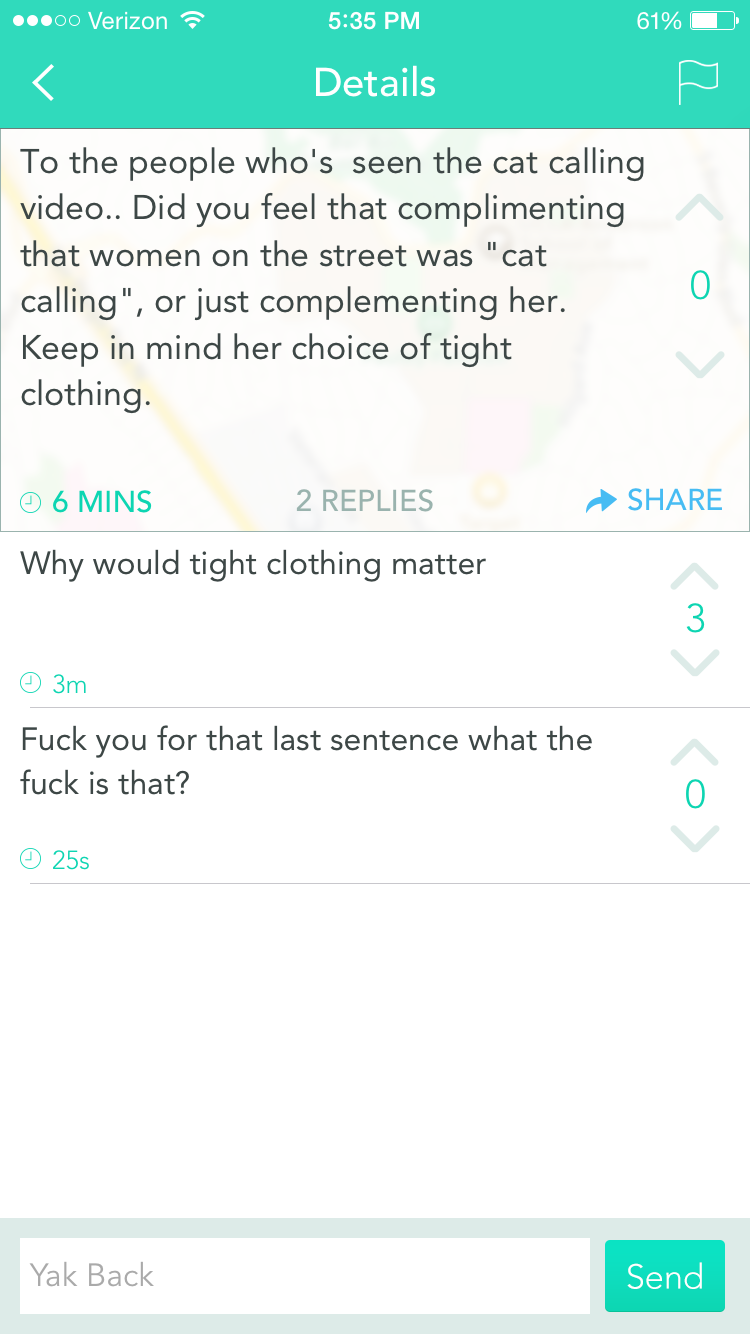 The alarming number of yaks about women’s perceived promiscuity also shows a trend towards the objectification of women on our campus, as well as a dangerous sense of entitlement and superiority among some within the Yik Yak community. With the increased awareness of rape culture on college campuses, these yaks are not only insulting, they are frightening.

This fear is only increased with yaks such as these: 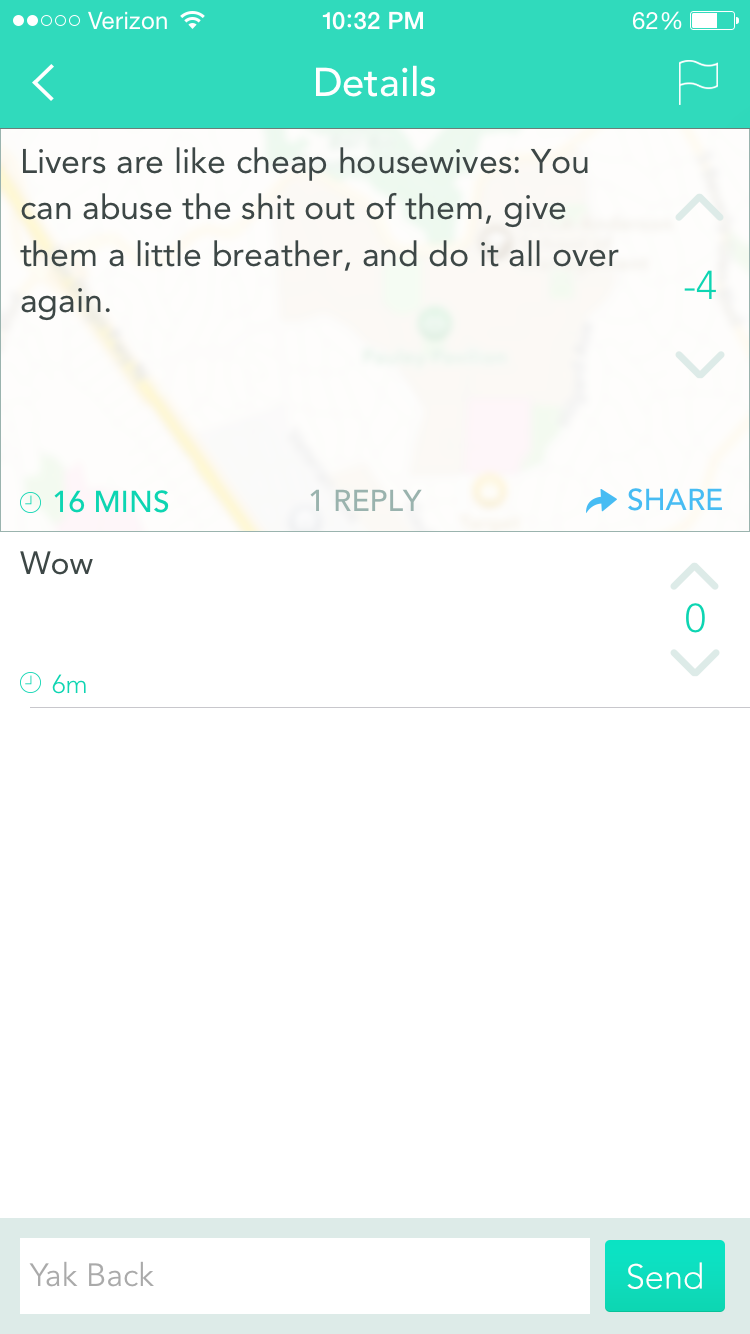 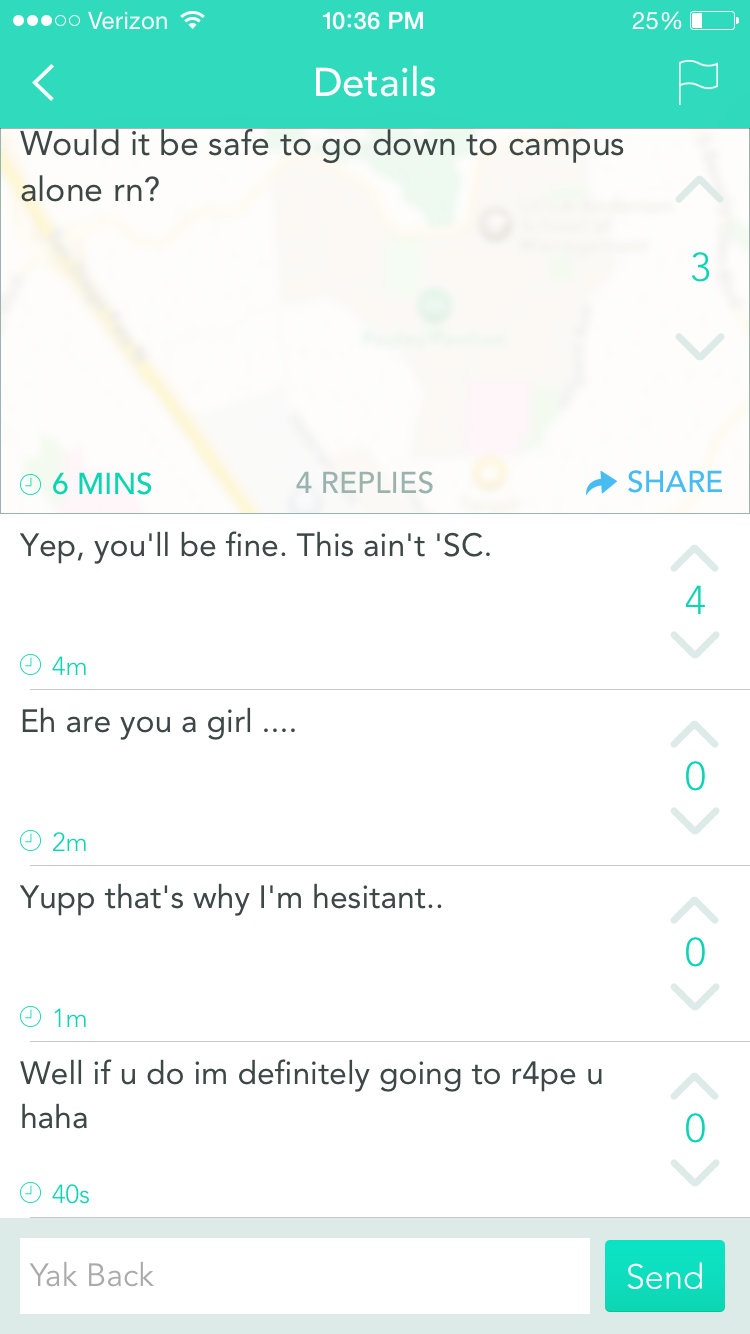 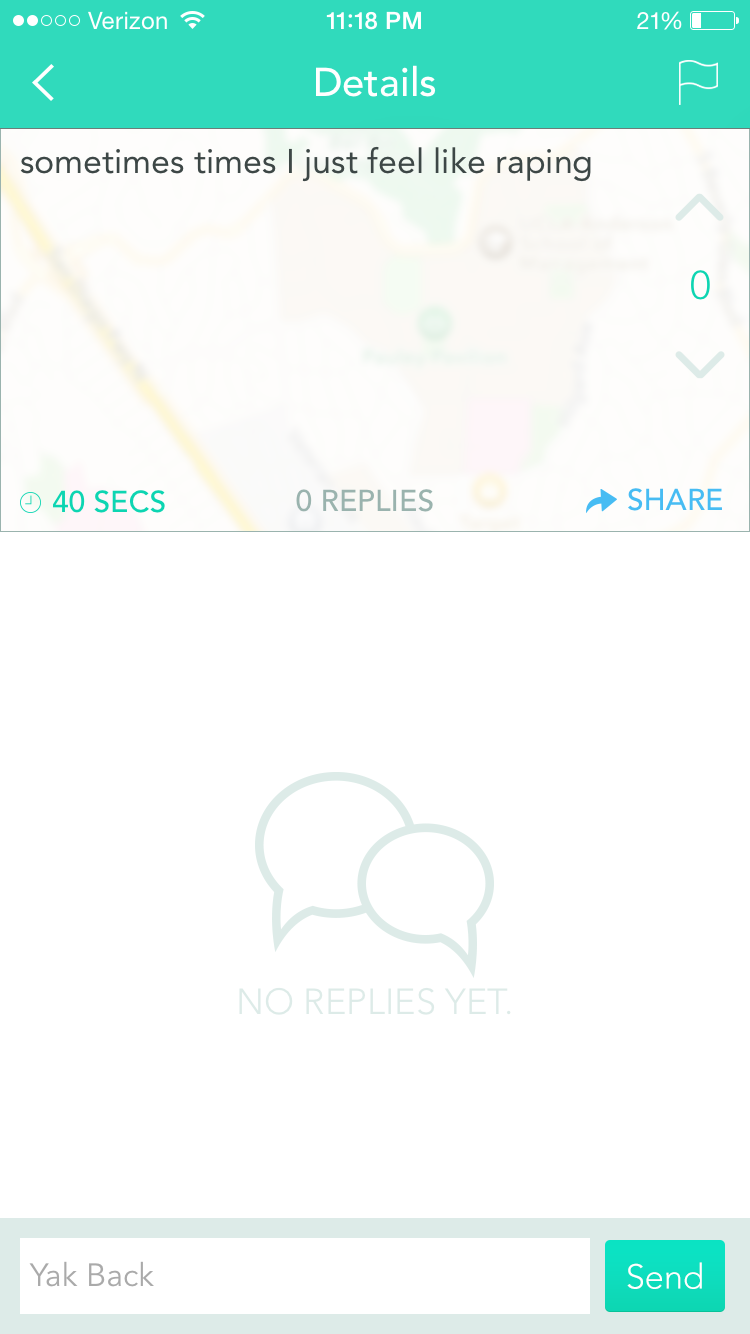 Some may argue that these yaks are only jokes, or that they come from a small percentage of UCLA’s student population.  But in a world where one in four college women will experience sexual assault in their academic career, I don’t find these “jokes” particularly amusing.

These screenshots are only a fraction of the posts I have encountered that either insult or threaten women on campus. While it helps to note that they are often unpopular, receiving “downvotes” and outraged comments, this does not negate the fact that these posts exist. The people who posted these yaks are our peers. They live among us, and so do their dangerous attitudes. These posts showcase how deeply entrenched sexism is within our very own community. They also reveal racist assumptions concerning the sexuality of Asian women, and the perceived danger of USC’s campus, simply because of its proximity to a higher percentage of minorities and people living in poverty. The anonymity of Yik Yak provides a glimpse into the minds of our student population, and what it shows is not pretty.

But what can be done about it? I do not necessarily think that banning the app will solve any problems, as this would not erase these attitudes from people’s minds. In fact, taking away people’s choice on whether or not to use this app would only inhibit our freedom of speech. However, I do think people should question whether or not they should choose to support something that is so notorious for the spread of hate. Since Yik Yak first became popular on campus this past fall, it has shown a significant decline in use. Now, this may be because at some point, seeing the same recycled posts over and over again can get pretty boring. But I also like to think that people are getting just as fed up with seeing such a consistent stream of racism and misogyny.

Nonetheless, if you can’t bring yourself to delete the app, it is important to use it productively. While the yaks above show an alarming level of ignorance, there have been plenty of anonymous yakkers to call these people out. These are the types  people you should aspire to be. Next time you see a post calling someone a “slut”, or comparing women’s brains to that of squirrels, don’t just scroll by: say something. Because if you can’t stand up for the abolishment of hate in an anonymous setting, how are you ever going to get the courage to do so in the real world?