When I heard that Tina Fey, creator of one of my favorite series, 30 Rock, was coming back with a new show, I was thrilled. Yes, in the past, Tina Fey has not always been the model of  perfection when it comes feminism or political correctness. There is no doubt that Fey’s comedy can be termed “problematic.” So while I remain a fan of hers, I began my viewing of the Unbreakable Kimmy Schmidt with slight trepidation.

It turns out that this skepticism was not unwarranted. Since its premiere, Unbreakable Kimmy Schmidt has received a flood of criticism for its portrayal of race and its trivializing jokes about rape and sexual assault.

Within the first episode, Kimmy is introduced to her new roommate, Titus Andromedon, who fulfills the sassy gay friend trope down to a tee–he’s overly dramatic, he helps Kimmy with clothes, and it’s not uncommon for him to burst into song.  However, he is also a fairly well written character with depth and personality. In a show where many of the characters are based heavily on stereotypes, this is extremely important. Unfortunately the same cannot be said for Kimmy’s Vietnamese friend who works at a Chinese restaurant and is good at math—Dong. While it is easy to see that the show is attempting poke fun at the existence of stereotypes that surround people of Asian descent, something about the character of Dong rings hollow. Yes, the stereotype is brought up, but nothing is really done to subvert it.

Perhaps even more controversial than the character of Dong is that of Jacqueline–Kimmy’s self-centered, ridiculously wealthy upper East side employer. However, a few episodes in, it is revealed that this character is more than meets the eye. Jacqueline is actually of Native American descent, choosing to dress as a white woman because according to her, “If you want to get anywhere, you need to be blonde and white.” 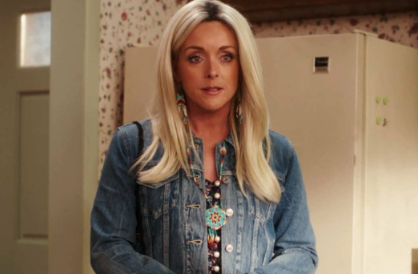 While this subplot certainly did not set out to be offensive, it definitely seemed to have crossed the line. Like the character of Dong, many of the jokes involving Jacqueline’s character seemed to simply point out stereotypes of white Americans and Native Americans. However, none of these jokes felt particularly progressive; they felt awkward and uncomfortable. Much of this, I believe, comes from the choice for Jane Krakowski to play a Native American character. Many believe that if they wanted her character to be Native American, then she needed to be played by an actual Native American. Instead, having Krakowski in borderline “red-face” erases the commentary the show was trying to make in the first place.

And yet, despite these issues, I found myself speeding through the first season remarkably quickly. Yes, the humor was sophomoric at times, and bizarre at others. But nonetheless, I found the show’s contagious optimism to be addictive. Because in the end, I truly believe that the show is based on good intentions.

This is not to say that the issues within the show should be ignored simply because I believe the writers meant well. However, the show’s clever writing and mockery of race and social tensions in America also should not go ignored.  The show still manages to introduce poignant issues of race and sexism. In episode 8, Titus discovers that he receives better treatment in New York City dressed as a werewolf than he does as a black man. And within the first few minutes of the pilot, we are already bombarded with social commentary about race and the media: 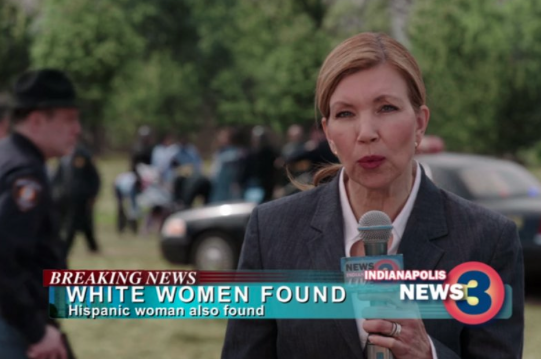 However, yet another pressing issue within the show is its foundation in kidnapping and sexual assault. The pilot kicks off by showing the rescue of  four women from an apocalyptic cult set in Indiana. Often times cases like these in real life involve tragic accounts of sexual assault suffered by the women in these cults. In fact, within the very first episode, Kimmy herself admits “Yes, there was weird sex stuff in the bunker.” While this statement leaves it up to interpretation as to whether the “weird sex stuff” was between the women themselves or suffered at the hands of their preacher, the real life events that the show is basing its premise off of are rarely so ambiguous.

However, while Kimmy’s implied rape at the hands of her kidnapper/preacher is perhaps a little too cavalier, the overall premise of the show is something that is overall rather progressive. Too often, victims of rape are seen as just that—victims. Once a character experiences a traumatic experience of sexual assault, their storyline becomes centered around their experience as victims, rather than as people. This is where Kimmy Schmidt breaks that mold. Kimmy’s almost overbearing optimism and love of life is still a part of her, regardless of her traumatic past and her struggles with PTSD. In this way, she is the definition of a strong female character—and not the type that has frequently been portrayed in media— the gun yielding, masculine yet sexy cool girl kind that plagues much of our pop culture.  Kimmy wears sparkles, bright colors, and flowers. And yet, none of this detracts from her strength as a human being.  Instead Kimmy teaches that the only way to be a real “strong female” is to be unabashedly yourself.  This is what allows her the ability to change the lives of everyone around her for the better, to create a life for herself after a tragic past, and to ultimately put her captor behind bars. Because after all, females really are strong as hell.

So with Season Two promised for 2016, I can only hope that the writers continue to take the show in the right direction–by allowing each character to have the depth and development they deserve, by continuing to showcase truly strong women, and by continuing to write with the same overwhelming optimism that has characterized Unbreakable Kimmy Schmidt from the beginning.