Last Saturday, January 21st, 2017, the Women’s March on Washington marked the largest protest in U.S. history. I attended and had the opportunity to listen to a slew of monumental speakers, talk to fellow marchers, and hold up my own signs as I marched down Pennsylvania Avenue in protest of the hateful and exclusive platform on which the Trump presidency is founded.

The event was set to begin at 10 a.m., but the D.C. Metro opened three hours earlier than usual, at 4 a.m., to accommodate what would become the Metro’s second highest volume day in its 40-year history. Upon emerging from the crowded underground station at approximately 9:15 a.m., I was surrounded by pussy hats and clever signs.

An eerie energy hung over the crowd as we all waited for the event to truly begin and thus to have the ability to channel this energy into something more positive and productive.

There were a total of 44 speakers for the event, ranging from the National Co-Chairs of the Women’s March on Washington – Tamika D. Mallory, Carmen Perez, Linda Sarsour, and Bob Bland – to Honorary Co-Chair, distinguished professor emerita, and activist Dr. Angela Davis, to rape survivor and President and Founder of Rise – an organization that helps legally protect sexual assault survivors – Amanda Nguyen. The crowd watched in awe as six-year-old immigrant rights activist Sophie Cruz delivered a powerful speech in which she urged her fellow protesters to fight with love and for other children like her with immigrant parents not to be afraid.

“We are here together making a chain of love to protect our families. Let us fight with love, faith and courage so that our families will not be destroyed,” said Cruz. As if the six year-old’s speech-delivering skills were not impressive enough, she then proceeded to repeat her speech, but this time in Spanish. Her parents and younger sister proudly watched on behind her as she led the massive crowd in a powerful chant: “Sí, se puede.”

As morning turned into afternoon and the list of speakers continued on, the crowd began to grow more and more restless. Eventually, marchers began diverting their attention and migrating towards the streets where they could march, while prominent speakers such as Angela Davis and The Mothers of the Movement, a group of black women who have all had a child killed due to police brutality, took to the stage.

Anagha Bharadwaj, a 24-year-old law student, was bothered by this loss of focus during the day. She expressed her apprehension to attend the March in the first place because she was unsure if she could fully trust an event comprised so greatly of white women to represent her fairly.

White feminism is a problematic type of feminism that ignores the struggles of women of color and assumes the same level of privilege to be held by all women. Anagha realized her fears of white feminism leaking into the march had been affirmed as marchers turned their backs on The Mothers of the Movement.

Perhaps the timing was unfortunate and marchers would have been more attentive had these speakers spoken earlier in the morning, but the fact remains that pertinent issues within the Black community were being ignored as marchers grew restless.

Anagha expressed her desire for herself, along with all women of color, to be represented fairly. In order for this to become a reality, people must be present and aware.

The marchers’ preoccupation with jump-starting the actual march took the focus off of important issues and failed to give the deserved respect and attention to already underrepresented groups. This is a problem Anagha believes advocates and all people must be made aware of in order for the issues pertaining to every woman and every underrepresented group to be rightfully addressed. Then, and only then, will change ensue.

I spoke to some of the many other marchers who had stuck around to hear more of the speakers, and I felt unified in their commitment to this event and its goal of representing all types of people. After all, the day was still dedicated to connecting with others through the power of love.

I asked each one of them why they march. 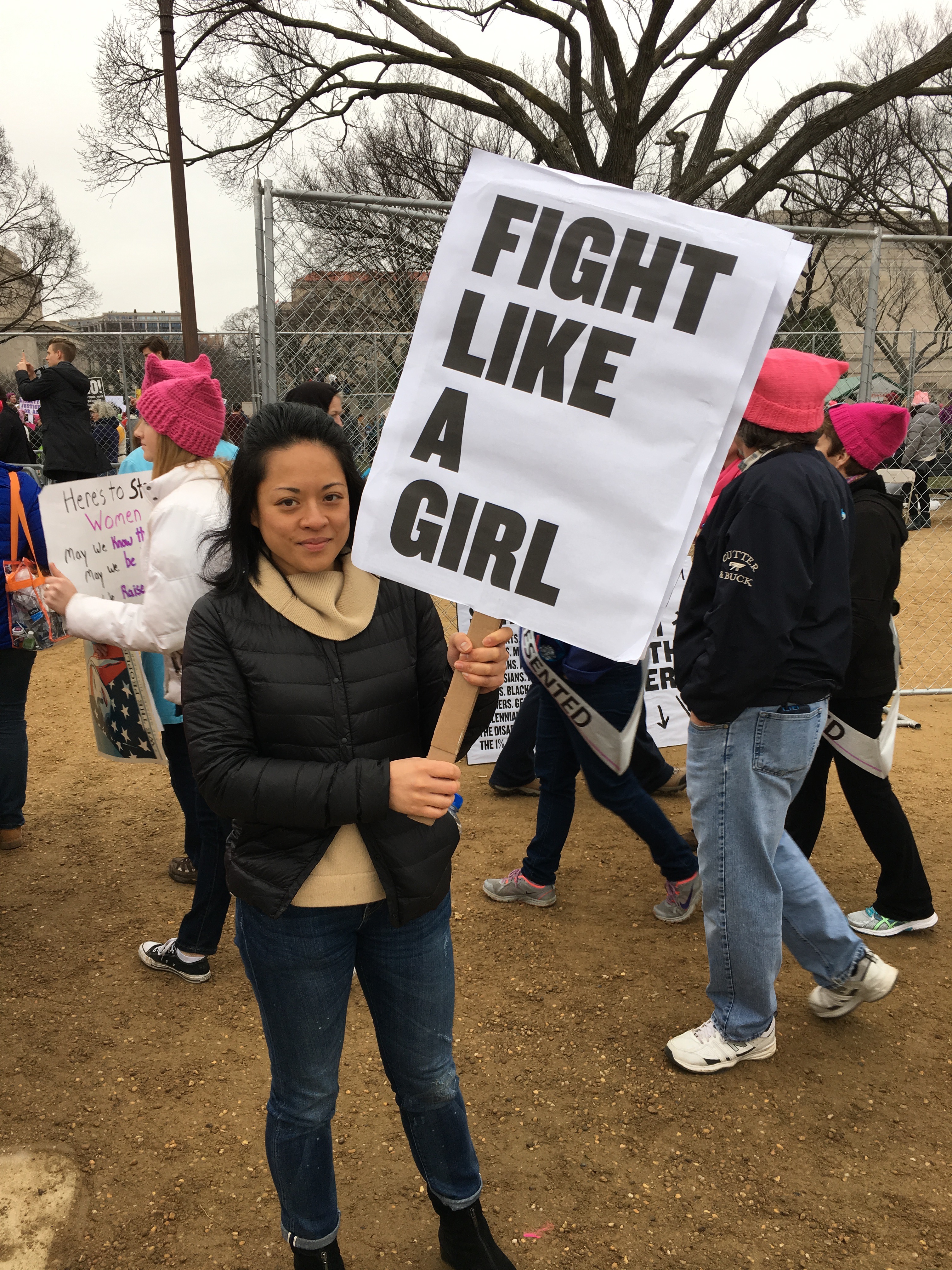 Valerie, 35, marches for the ideas of solidarity and moving forward. 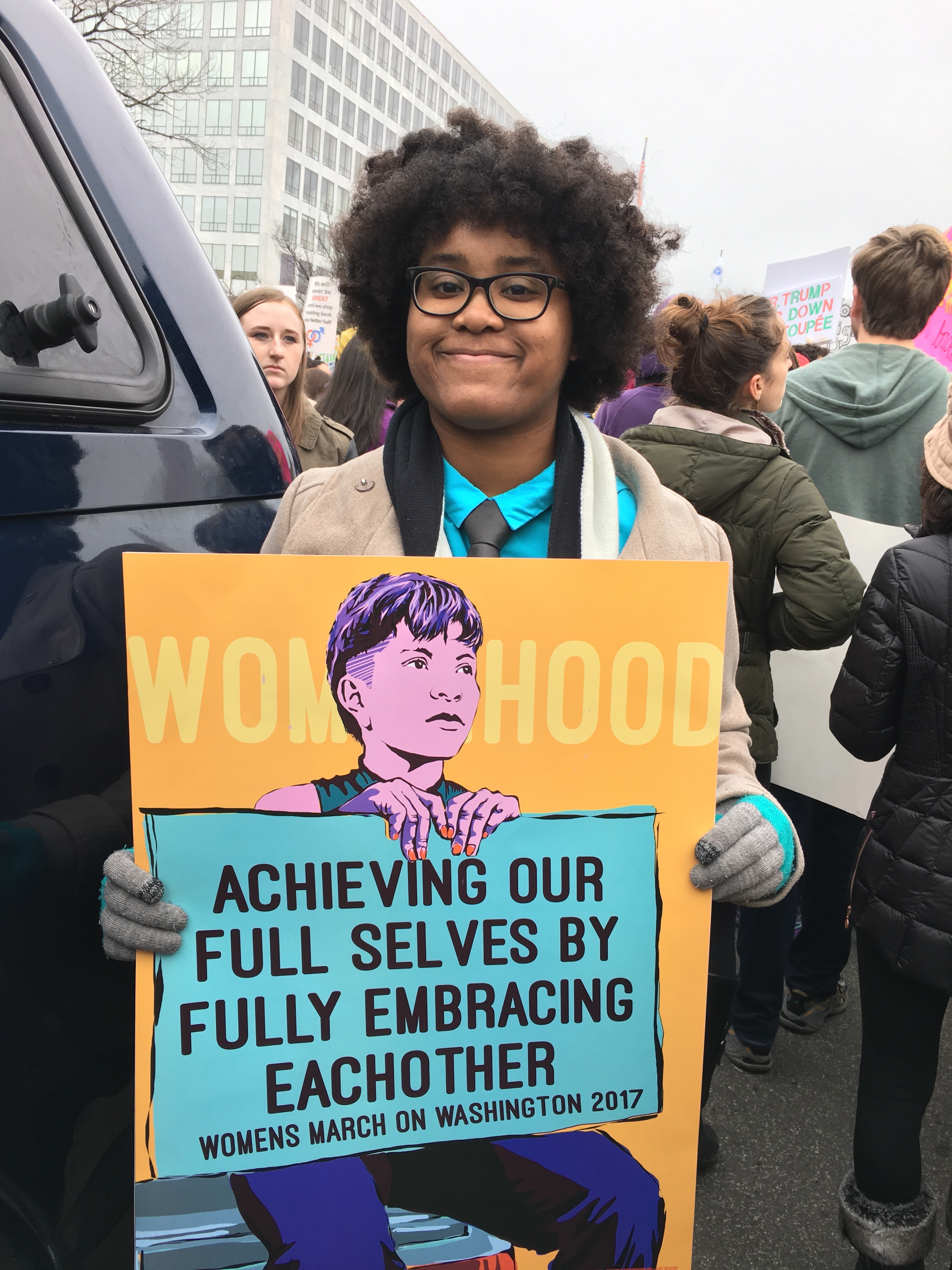 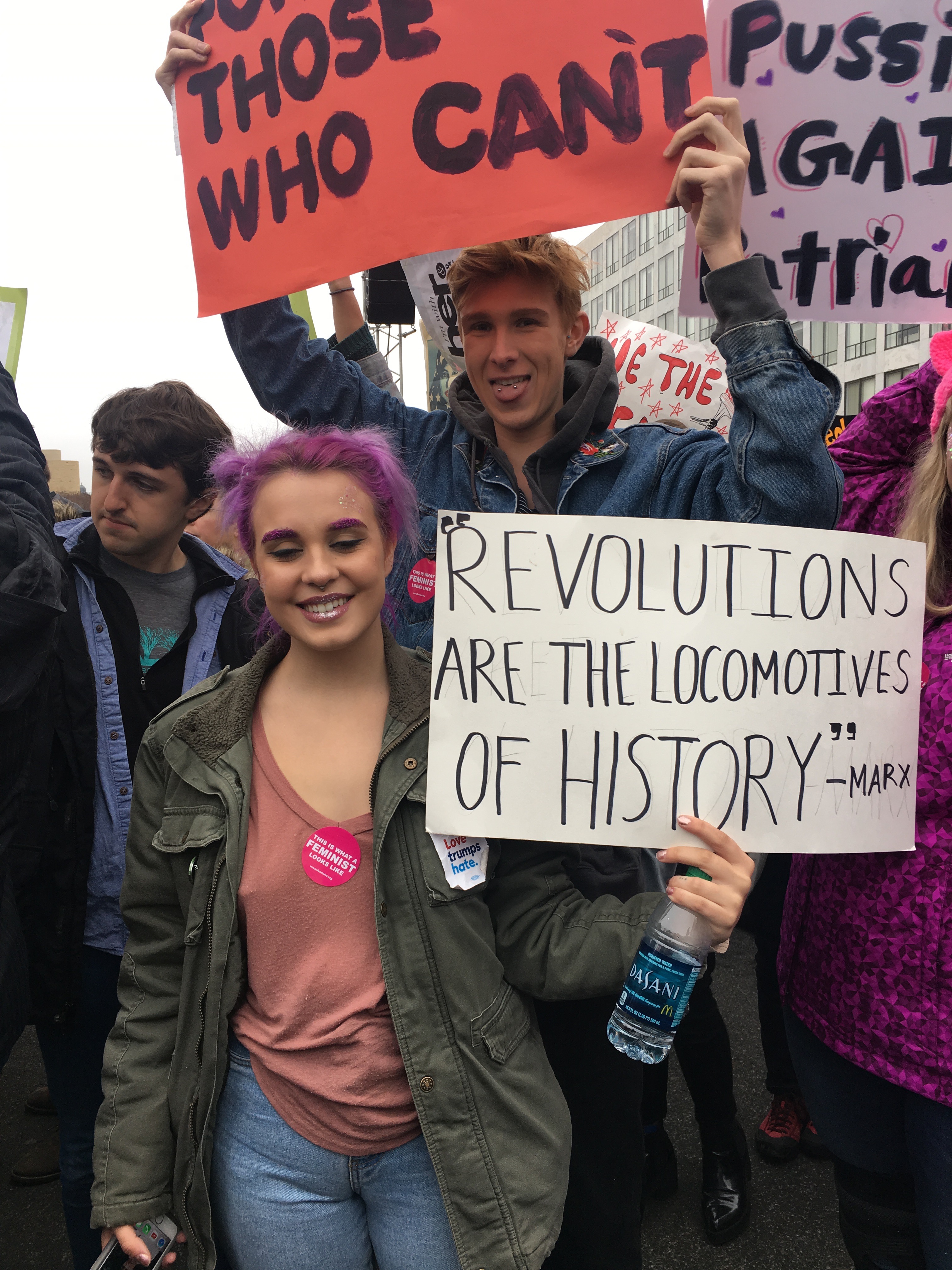 Sofia, 18, marches because it is a powerful way to turn anger into activism. 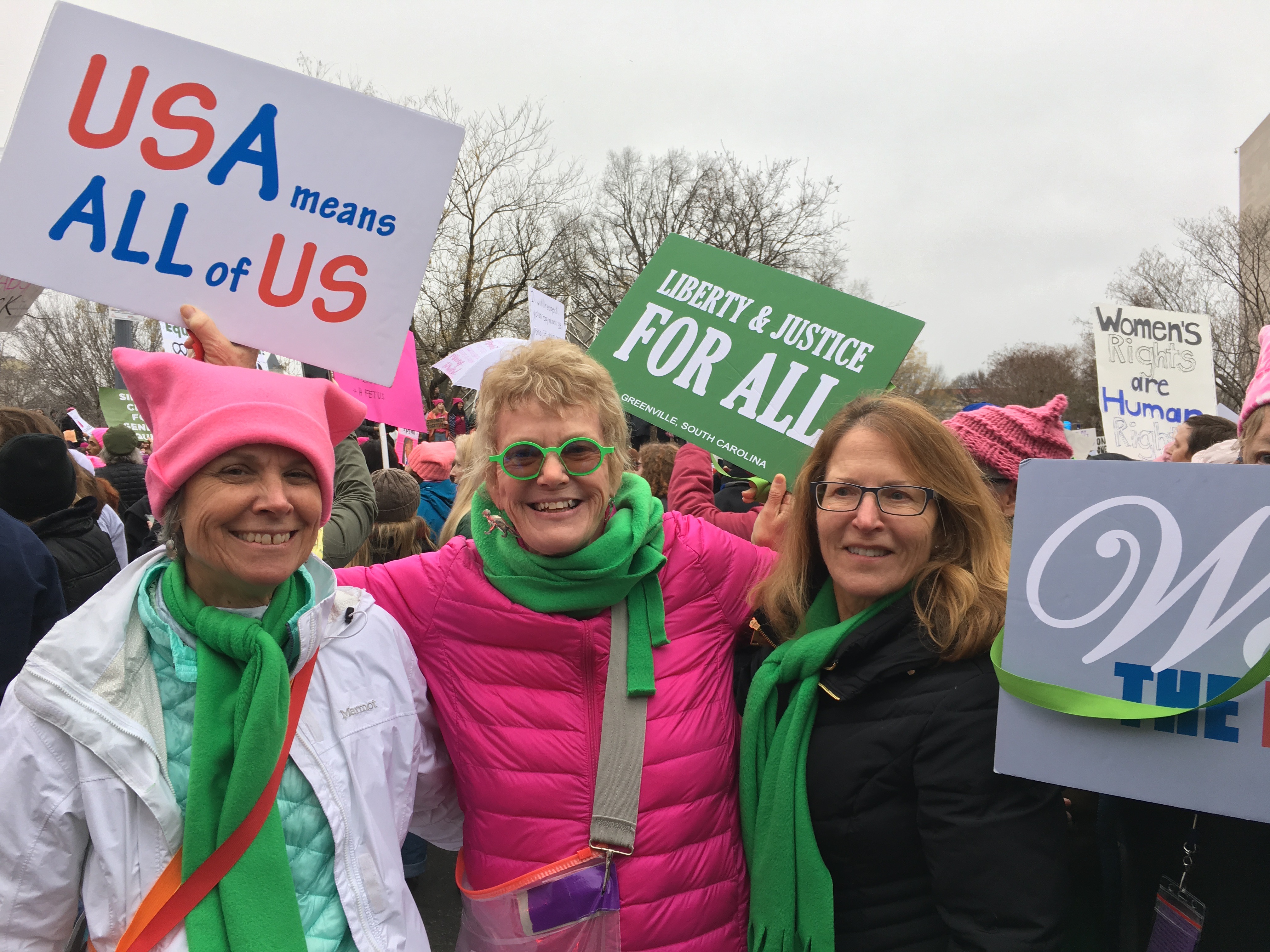 Sharon (center), 74, marches for the rights of all women and equality. 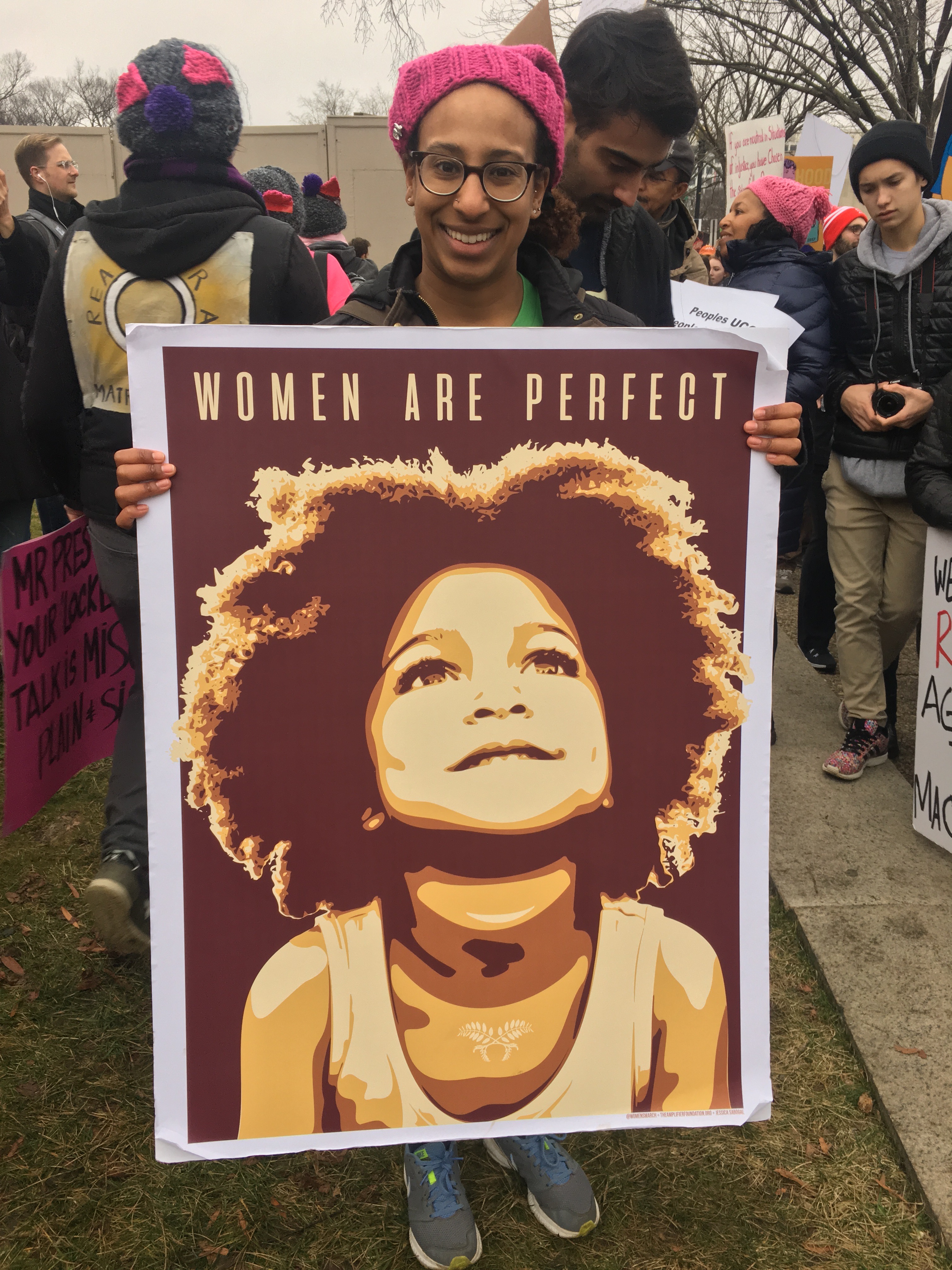 Seana, 26, marches for her family and to fight the stigmas of shame and oppression too often associated with people of color. 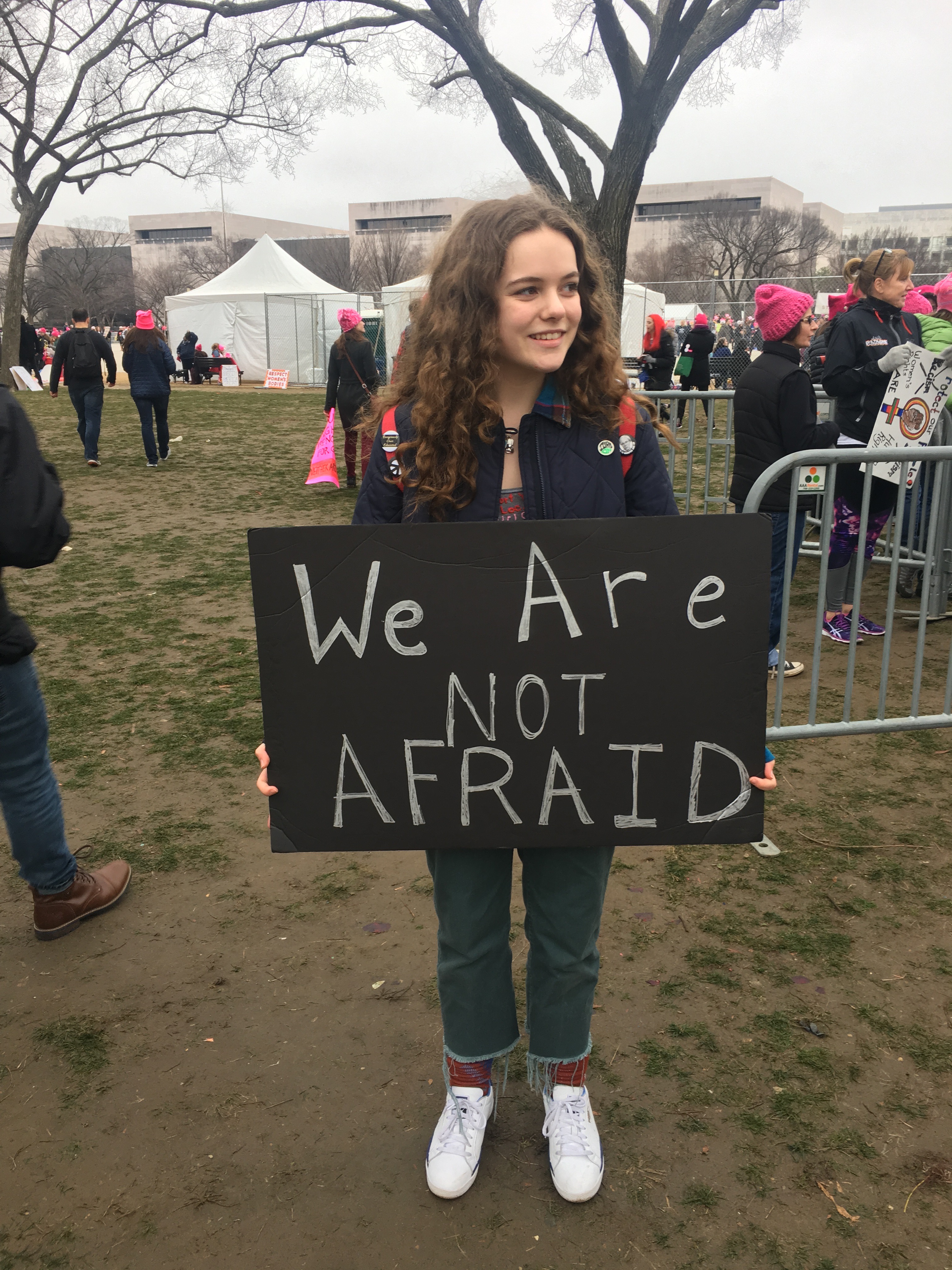 Ray, 16, marches for her friends of color and to put her privilege to good use. 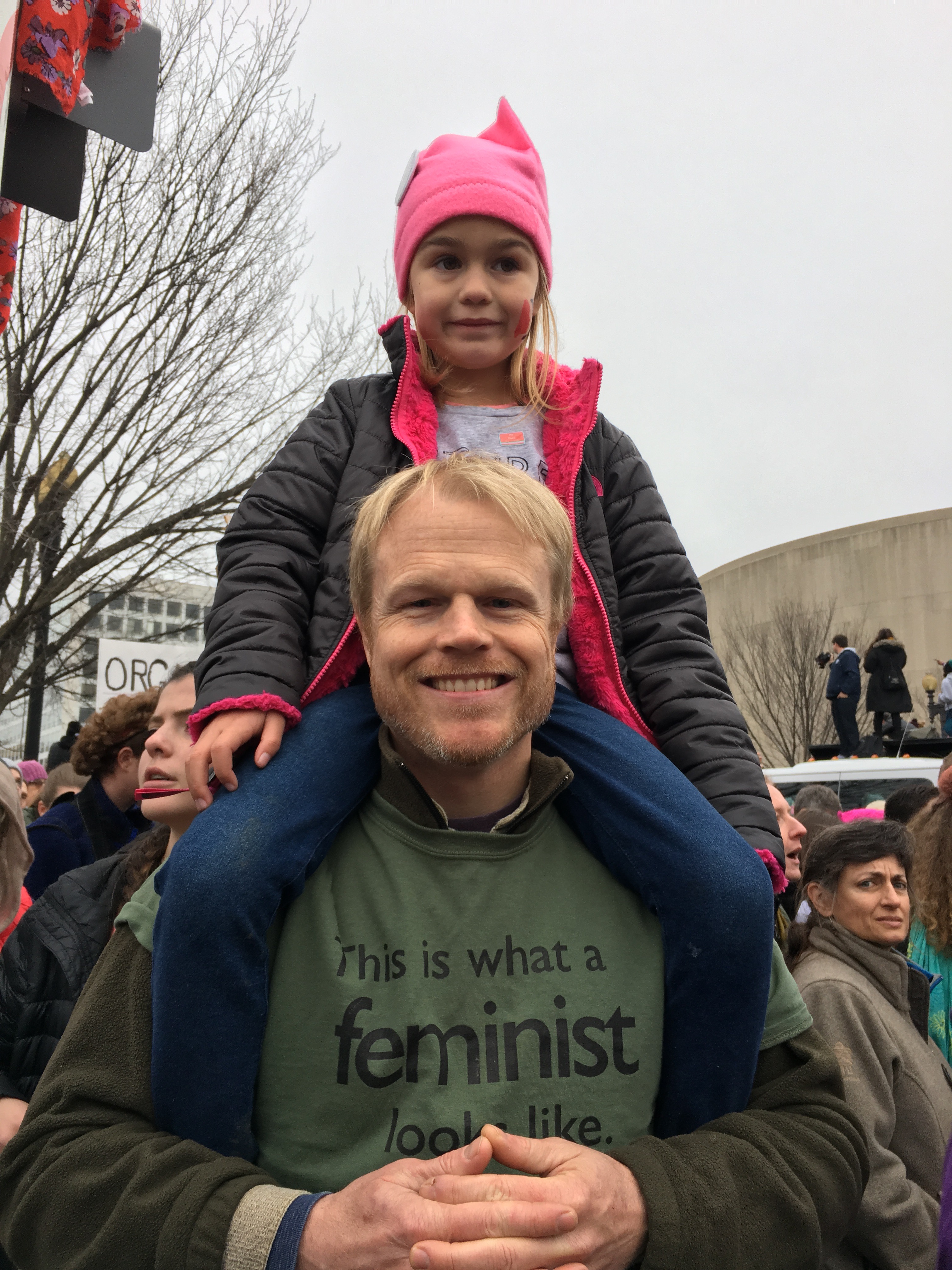 Mia, 6, marches because “This is what democracy looks like.” 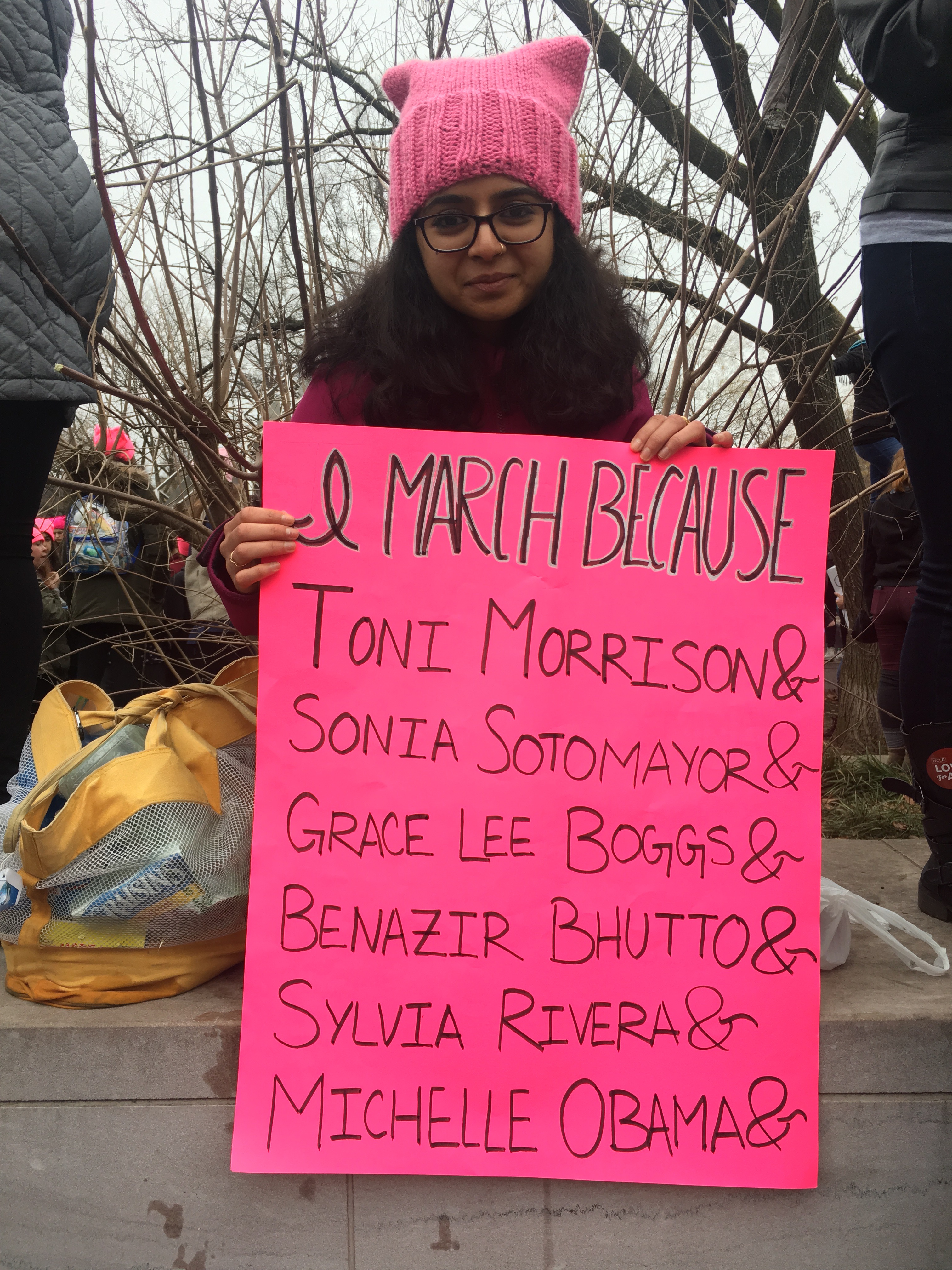 Anagha, 24, marches for all of the women who marched before her and who gave her the right to march.

The Women’s March on Washington, like any organized rally/protest, offered salient opportunities to its participants for growth. With close to a million people from all over the nation congregating in one place, people inevitably held some issues higher than others depending on their privilege. Is this wrong?

What matters most is that people — so many people — came together because they refuse to accept hate. They refuse to support a presidency which actively perpetuates ideas of misogyny, Islamophobia, ableism, homophobia, racism, the negligibility of climate change, and many more harmful platforms.

In this time that calls for pressing political action against a dangerously bigoted administration, let us hold our signs high, proudly, and unequivocally. But let us not forget to ask our neighbors why they hold theirs.