The following quotes are true statements overheard in various locations around UCLA’s campus throughout the past month: 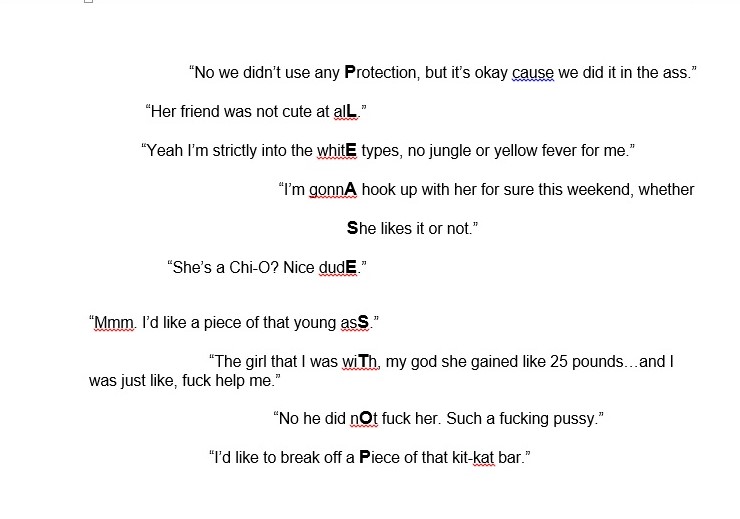 This language permeates UCLA’s dining halls, dorm rooms, frat houses, and athletic centers. It is the unfortunate result of toxic masculinity and the hegemonic roles and expectations that delineate how men are supposed to behave themselves–as violent, unemotional, aggressive, dominant, tough, sexual, and confident. This concept of what it means to be a “real man” lead to the constant threat and policing of male masculinity. As a result, men feel pressure to actively enforce their masculinity, which often occurs through this sexually explicit, misogynistic or racist language.

These remarks are not simply “locker room talk,” as president-elect Donald Trump has spoken about; this language is emotionally, psychologically, and even physically harmful. Just because some of these men refuse to directly address the women they are speaking about, does not mean their words have zero implications or consequences. This derogatory language normalizes behaviors associated with sexual violence and racial discrimination, and preserves a rape culture in which men behave in ways under the assumption that sexual aggression and objectification are natural qualities of masculinity. This is one reason for the alarmingly high rates, underreporting, and limited punishment of sexual assault on college campuses. When faced with charges of sexual assault or rape, college men often face little scrutiny, excused by a “boys will be boys” mentality, implying that they are simply acting out of a natural sexual impulse.

UCLA boys. Your language is consequential. Your words create realities: sexual assault and suicide rates on college campuses are higher than ever before. For this reason, I ask you this: please stop the dining hall talk.