All Images Courtesy of Eve McNally
Image depicted above: University High School picket line on Wilshire the second day of the strike, January 15.

The United Teachers of Los Angeles (UTLA) strike is a month behind us. Here are some of the tentative agreements that were made and what UTLA is still fighting for.

UTLA, which represents teachers, nurses, counselors, and librarians in Los Angeles Unified School District (LAUSD), went on strike for six days for smaller classroom sizes, a raise in pay, to end privatization of public schools, and for more full-time staff to support students—to name a few. This was the first time for 30 years that UTLA went on strike.

Many teachers on strike shared the concern of classroom sizes being too big.“It is not possible to check-in with each individual student in only a 55-minute period and ensure that each student understands the material,” said Angelina Murphy, who has been teaching English for 3 years at a school in the San Fernando Valley. “I was unable to be the best teacher I could be.”

Classroom sizes in LAUSD average about 40 students, and in some cases the max classroom size is as high as 46 students in a class. Not only does an average of 40 students per class pose a physical difficulty for accommodation, but it unfairly puts pressure on teachers to perform better.

“I’ve been struggling with that idea of how I can provide a more quality education to all my students,” shared Betty Hwanh, a math teacher at University High School. “But I realize if there is one cashier and a hundred customers, no matter how trained that cashier is, there is no way that they’re going to be efficient. No matter how amazing that cashier is, there’s still going to be a lot of wait. Same goes with my students. No matter how well I structure my lesson, if there is only one adult and like 40 other students who are waiting to ask questions I just can’t help them, and that’s the reality of our daily classroom.“

District-wide constraints for accommodating students are often framed as a failure of teachers or public education in general. However, the demand that teachers perform better and faster is an impossible task to fulfill with a classroom of 40 students. Yet, the argument that public educators need to work harder remains a popular argument taken up by privitizers, or those who support for-profit charter schools.

LAUSD students, however, know that the lack of resources is not a question of their teachers’ competency. “I have teachers who come at six in the morning to help me with homework before school starts. That’s something that most people won’t do for me,” said Via Mariano, a junior at Venice High School. “So, it’s nice to see that teachers will do it. If they’re going to be here for us then we should be there for them.” Mariano was out on the picket line during the strike alongside her teachers at Venice High. 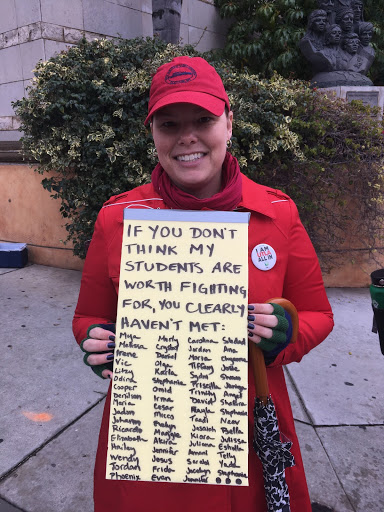 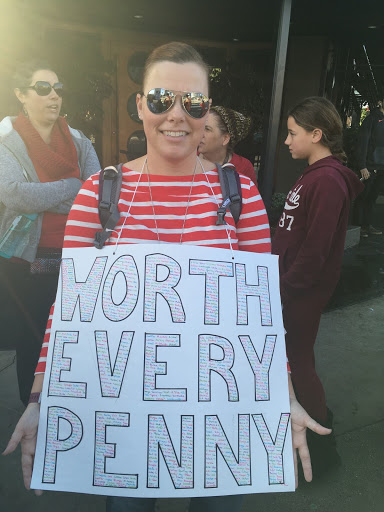 Nancy Phear, an English teacher at University High School, attends the strike. The sign on the left reads “If you don’t think my students are worth fighting for, you clearly haven’t met:…” with a list of her students’ names. The sign on the right reads “Worth Every Penny” and has the names of all her students handwritten inside the letters.

The strike ended with an agreement between UTLA and LAUSD that the district would impose an immediate reduction of seven students in secondary math and english classes. The agreement will also revoke a policy which had previously allowed the district to ignore all class size averages and caps.

“It really affects students’ academic performance because if there were more support, if the classroom were smaller, or if there were more adults in the classroom, then they could do well. But that’s not the case. Just because they are from Inner city, just because they are low-income, that shouldn’t stop them from [receiving a] quality education. I think everyone deserves high quality education,” shared Hwanh, bringing focus to the fact that LAUSD has the highest concentration of low-income students in the state.

Murphy highlights how charter schools increase segregation by race, class, and language, while privitizers profit off of these schools which are run like businesses. The looming threat of increased privatization in LAUSD schools was a major focus of the strike. All six days, picketers chanted, “Privitizers take a hike, education is a right.” Post-strike, the district approved a resolution calling for a temporary ban on new charter schools while an eight to ten month study is conducted to look into the efficacy of charter schools. The moratorium will not impact existing charter schools.

In the United States, LAUSD’s teacher demographic is one which most similarly reflects the demographics of the student population in the district. In Los Angeles 73 percent of students are Latinx, and Latinx educators account for 43 percent of LAUSD’s teaching force this school year. National statistics share that more than half of the nearly 51 million students are students of color, though a colossal 80 percent of educators are white. UTLA’s fight for a better contract, a raise in pay, and for respect from the district is without a doubt a racialized fight. Following the strike, UTLA won a retro salary increase of three percent.

Diana Chavez has been a school psychologist for 20 years and now works at Elizabeth Learning Center in Cudahy. Chavez refers to herself as a product of LAUSD schools. ”I grew up in the area, so I am giving back.”

Chavez is one psychologist to 1,750 students at the K-12 school. “We’ve got kids who’ve got issues from homelessness, poverty, divorce. We have students whose parents have been deported, parents who are incarcerated. We have foster kids, so a lot of our kids come to school with a myriad of issues and yet we expect them to learn.” 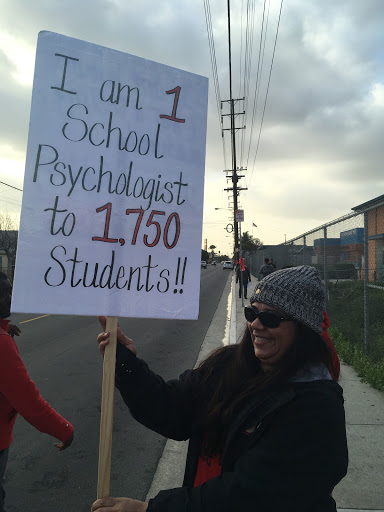 Diana Chavez, the only school psychologist at Elizabeth Learning Center, a K-12 school in Cudahy.

“This school year it’s been rather difficult because our case loads keep increasing. We have to provide services to not just special ed, but the general ed population. But because I am so driven by the 3-year evaluations,” Chavez continued, “the kids who have been receiving special ed services, are the students that are my priority cause I’m under a timeline.”

Chavez went on to share what the most compelling reason to be out on the picket line for her. “So I am taking a lot of work home, spending endless hours into the late night working on these reports. So um, that’s why we are overworked, overstressed, it needs to change. That’s why we are fighting for this ratio 750:1, but Ideally 500:1 cause there’s a lot of services we can provide.”

As part of the agreement between UTLA and LAUSD, the district is required to hire at least 17 new full-time counselors, allowing the district to maintain a counseling service ratio of 500:1 per secondary school. The district has made a number of agreements to bring in new hires to support students; however, this move has been called unsustainable by the county. LAUSD has until March 18 to show how the proposed new steps will be supported financially or the county could take over all fiscal decision making.

While much of the post-strike promises depend on the board of educators to follow through, it will continue to be students, teachers, psychologists, nurses, librarians, and custodians who show up for public education, in a district paid for by billionaires.

“It is no secret that a majority of teachers are female. It is no coincidence that folks are trying to underpay a feminized workforce or believe that a profession that is largely made up of women is undervalued in our society,” said Murphy.

“My Italian teacher, Mrs. Wilcox, showed us, before the strike, how many flashcards they give us and how many flashcards she actually had to buy. The stack that they gave her was a fourth of the size.” Jessie Grace, a freshman at Venice High School shared. “Whatever we need its coming out of their pocket. And that shouldn’t be the case.”

“That’s why they take advantage of us. Many of us, they know, are here for the kids,” said Chavez. This is a glaring truth which will continue to be at the crux of the fight for public education and demands for respect in the workplace.

Should California Abolish The Three-Strikes Law?

The “Solution” To Climate Change