Z is for zero tolerance, but what does that mean? It means that you do not get to decide whether or not you hurt someone, whether or not you have offended or insulted someone in context of assault and sexual violence. Zero tolerance means that you cannot attempt to excuse, pardon, or bring some “logical argument” to your actions that have hurt someone else either emotionally or physically. No more “boys will be boys,” no more “sometimes they just can’t help themselves,” no more “they were asking for it.” No. More.

Did you know 98% of rapists never spend a day in jail or prison? And that in America there are about 293,000 victims, age 12 or older, of sexual assault each year?  So let’s talk about consent, since apparently there are at least 293,000 abusers who don’t know what that means. Let’s make something clear: it doesn’t matter if a person is walking butt-naked down a street, they do not owe you, or anyone, anything if they don’t want to.Yes means yes, and no means no. It really is that simple! Any consent given, meaning a positive verbal agreement stated by an individual with a clear mind, free of any kind of inebriation, outside force or pressure, must be clear and unambiguous to both parties present. This includes already established relationships; just because consent has been given in the past does not mean that it is there now or will be in the future. A person can also change their mind whenever they want to, even if they have already given consent.

While sexual violence occurs regardless of gender, rape culture tends to be more in reference to women and how sexual violence against them is normalized, accepted and even excused in social media and popular culture. More often than not, young girls and women are told to get their own drinks at parties, and to never leave their drink alone for fear that someone will slip a date-rape drug into it. It’s even gone so far that a company is in the process of creating a nail polish that can detect date-rape drugs. There are also educational classes that teach women how to prevent an attack, and how to avoid being a victim of an attack. How about instead of perpetuating the idea of how to avoid being raped, we just teach people not to rape and to respect people and their desires?

A big part of rape culture is when sexual assault, violence, and rape are made into jokes, and through this action these dangerous situations become normalized and even ignored. For example, Donald Trump, an actual candidate for Presidency of the United States, has propagated rape culture in his tweets and in his books: “All of the women on ‘The Apprentice’ flirted with me — consciously or unconsciously. That’s to be expected.” — How To Get Rich, 2004. 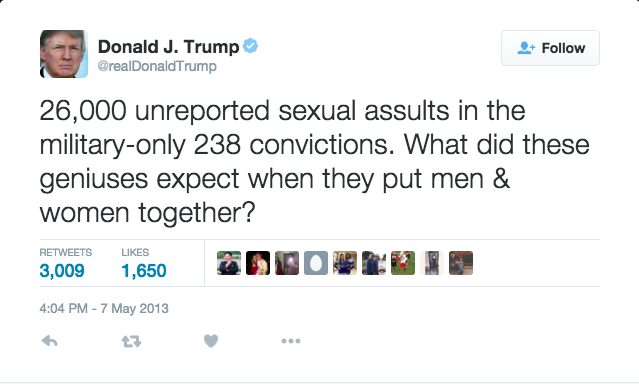 Aside from Donald Trump, other celebrities, like Woody Allen and Bill Cosby, who have actually sexually assaulted people, are still constantly defended by fans.

There are also many other infractions of rape culture seen in the United States. This includes when victims on school campuses are either not taken seriously, or sometimes downright ignored by their universities. Emma Sulkowicz, a student at Columbia is one of these victims, she said she would carry her mattress around the school until her abuser was either expelled, graduated, or left the school. Sadly, her request was ignored and she recently graduated taking the mattress with her. Emma is not alone. A survey shows that 1 in 5 female undergrads suffer sexual attacks. However, one must also keep in mind that this survey does not account for all the universities, nor the sexual assaults that occur throughout the US and the world that do not take place in them.

Why are these victims not taken seriously? Isn’t sexual assault a crime? Isn’t it a crude violation of a person’s rights? We can not allow for this to keep happening, to let people keep defending the perpetrator and not take a stand for the victim. Zero tolerance means we can no longer let rape culture be an actual part of our society. We can no longer let sexual assault be something that is contested, and even worse, joked about! So yes, Z is for Zero Tolerance, and it will continue to be so until everybody takes sexual assault for the serious issue that it is.

Y is for Yes

W is for Weddings

V is for Virginity

U is for Undies