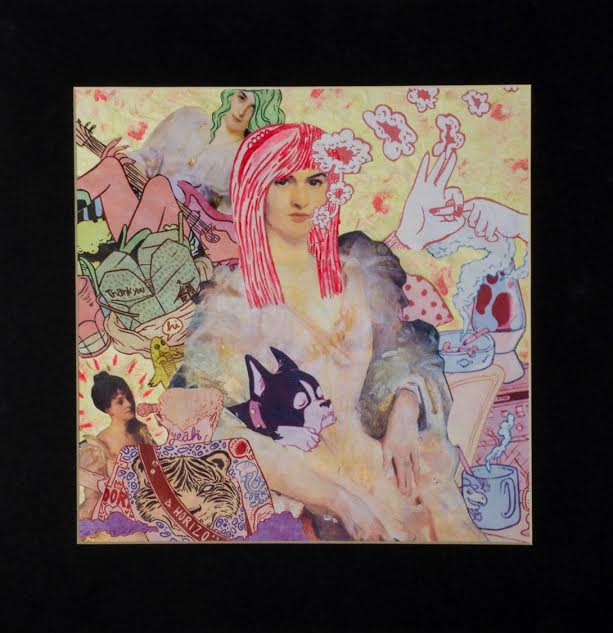 In 1884, John Singer Sargent worked on his piece of Madame Gautreau (GOO-TRO) for the Paris Salon. This would be his 6th year showing in the Paris Salon, each year gaining more notoriety.

Gautreau was considered a “professional beauty”, known for her remarkable looks and social stage presence. Many artists had tried to persuade Gautreau to let them paint portraits of her because of this, but had been turned down. Upon meeting her Sargent decided to try and take on the challenge, Gautreau agreed.

She wore a black satin skirt and a low cut black velvet bodice that showed her bare shoulders except for two thin straps. In one sitting her strap fell suggestively over her arm and Sargent requested that she leave it that way. After some modifications he submitted the painting to the Salon. It is said that an hour after the opening, it was uncertain whether it was the birth day or funeral of Sargent’s career as an artist.

Even though I did not use this portrait in the collage I saw it as a way to create a dialog between Sargent’s story and the work of Kirsten Rothbart. Little information can be found about her online.

She’s still a student at the School of Art and Design in Kassel, Germany, her emphasis being Illustration and Comic Art. Her work shows young, anti-heroine women deviating from gender roles, equipped with snake tattoos. She is heavily influenced by punk rock which is something that influences my work as well.

As soon as I saw her work I associated it with the underground feminist punk rock movement called Riot Grrrl.

It addresses many issues, the most important to me in this work being sexuality, patriarchy and female empowerment. I saw the combination of the two artists as a way to communicate my feelings of feminism and the history of women.

Sargent’s portraiture is primarily women sought out and painted for their beauty and status. In the case of the Madame X portrait, I thought that juxtaposing his story with Kirsten Rothbart’s work could be interesting. I wanted to show that Sargent’s women could very well have been Rothbart’s women then and now.

A Day in the Life of Depression

“Damn, girl! Work those legs!” – 10 Tips for Minimizing Cat-Calls and Leers While Running