According to the Principles of Community statement, UCLA

However, this past school year I personally witnessed numerous incidences of hate speech (hate speech is speech that offends, threatens, or insults groups, based on race, color, religion, national origin, sexual orientation, disability, or other traits) on campus by non UCLA students.

Specifically, the Westboro Baptist Church and other religious groups brought signs to campus (this past June) which stated “You deserve hell” and “Yoga pants are a sin.” 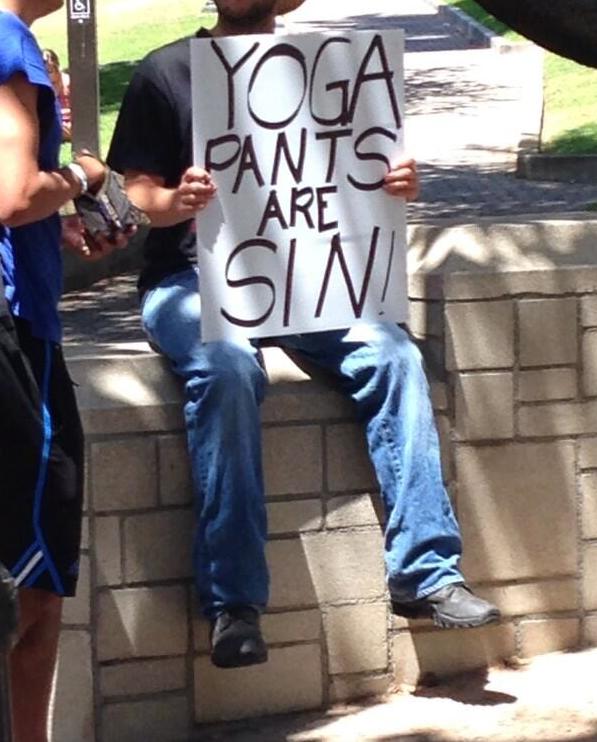 The three men who held the signs singled out queer students and told them that, “God hates fags” and that they were going to hell. They also claimed “all women are whores, [and] all women have venereal diseases.” The last thing I heard them say was, “All Muslims are terrorists,” as they singled out a woman wearing a headscarf who according to them “deserved to be raped and would be raped if [she] was in [her] own country.”

When questioned, UCLA PD, who watched the entire incident, agreed that they “did not like” the statements of the extremists, but also commented that these blatantly heterosexist, racist, and sexist statements are allowed under the first amendment right to free speech. The police only interferred when one student became so offended that he threatened to punch one of the extremists. The UCLA student who responded was put in handcuffs and later released.

As a student who frequently participates in protests, I value the first amendment right to free speech. That being said, the free speech amendment does not cover hate speech.

“[I]t is well understood that the right of free speech is not absolute at all times and under all circumstances. There are certain well-defined and narrowly limited classes of speech, the prevention and punishment of which have never been thought to raise any Constitutional problem. These include the lewd and obscene, the profane, the libelous, and the insulting or ‘fighting’ words—those which by their very utterance inflict injury or tend to incite an immediate breach of the peace. It has been well observed that such utterances are no essential part of any exposition of ideas, and are of such slight social value as a step to truth that any benefit that may be derived from them is clearly outweighed by the social interest in order and morality.”

Thus, the first amendment right does not state that anyone can say whatever they want wherever they want. UCLA is well within its jurisdiction to remove hate speech from campus even if the statements are made by non UCLA students.

In the case that UCLA states they can not intervene because these specific codes are only intended for students, I ask why they were able to enforce a campus wide ban on smoking? If indeed the intention of such amendments is to keep students safe and healthy, I call on UCLA to follow their own codes of conduct and apply them to anyone who is on campus.  In the case that UCLA disputes such codes as only liable to student actions, I cite the recent campus wide smoking ban which does not only affect students, but anyone who is on

“UCLA Owned or Leased Property [which] means a) all University property operated as part of the UCLA Campus, including campus buildings, private residential facilities, structures and facilities, parking structures and surface lots, and grounds areas; and b) all off-campus University owned or leased property or facilities operated by UCLA staff or faculty in support of UCLA administrative, teaching, research, medical care or other public service functions or private residential facilities for UCLA students, faculty and staff. “

Student codes of conduct can easily be applied to all those who are on campus. If those who violate the rules and regulations are not UCLA students, they can be fined or removed from campus.

These speech violations are not covered by the first amendment and are even explicitly banned under UCLA codes of conduct. As a student I implore my university to ensure the safety of its student body. In spaces like schools and universities, where everyone are supposedly given “equal opportunities,” these types of speech clearly interfere with certain individuals education. It is time that UCLA followed federal law in addition to its own rules and regulations. As a student, I call on my university to take a stand against hate speech and thereby create a safer space for students to access their education.