White Feminism™: “sees itself as ‘feminism’ without realizing that it’s falling into the old pitfall of viewing whiteness as the default standpoint and point of view. It assumes that white feminism speaks for all womanhood and all people and that it is the paradigm that will eliminate oppression. White Feminism attacks what it perceives to be misogyny against its own definition of femininity and womanhood, not realizing that it often supports colonization, racism, cultural appropriation, and reinforces white supremacy by discounting and dismissing the experiences and perspectives of women of color.” White Feminism commonly puts white women who repeat issues that were previously stated by women of color on pedestals while ignoring or degrading those who stated it before.

Lena Dunham isn’t my feminist hero. To me she isn’t even a good feminist, let alone the voice of current feminism. Dunham has repeatedly said horrible things without properly apologizing. I’ve compiled a list of quotes and images to show everyone that we need to find a better savior.

She wrote this awful racist piece about her trip to Japan, titled Sayonara:

In her piece about her trip to India, she stated in an interview with Rolling Stone that she sympathized more with “the stray dogs… than the poverty-stricken people.”

She made this classist statement, which shows that Dunham does not understand the link between healthy foods and poverty:

After her show Girls aired in 2012, people tried to call her out on the lack of people of color (POC) in her show.  Dunham stated the show’s overwhelming whiteness a “complete accident.”

These were the POC casted in the first season:

She made these tweets: 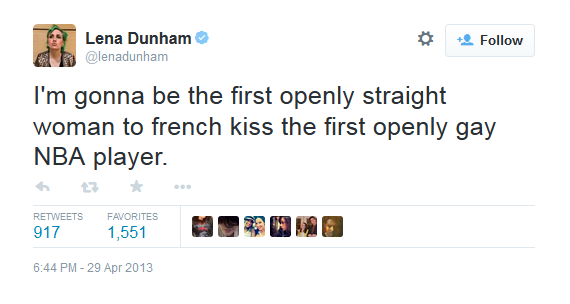 In her new book, she writes about how she “experimented” with her sister. Here are direct quotes from her book:

In the past couple of days, these quotes have blown up. The original website that posted the quotes, Truth Revolt, created a new post stating that Dunham sent a cease and desist letter to the company demanding a retraction and apology. The site refused since they used quotes directly from her book.

Unfortunately, the person who brought the quotes to national attention is Kevin D. Willamson.

A right-wing author for the National Review, he has stated that “Laverne Cox is not a woman” and that women who have abortions should be hung.

So while it is important to focus on what Dunham is doing wrong, it is also important to check the original sources and verify what the truth is.

There are multiple issues with what Dunham said in her book. While she is defending herself as a “curious child,” a 17-year-old is not a child. At 17, Dunham would know exactly what she is doing with her sister. Child-on-child sexual abuse is not unheard of but rarely reported, and the survivor has to deal with their abuser frequently.

Grace has written about her sister’s lack of personal privacy, stating that “basically, it’s like I can’t keep any of my own secrets.” There has not been any major interview with Grace up to this point, so all the public information of her reaction to her sister’s book are on their twitter accounts.

And while Grace seems to find what her sister did when they were younger not abusive, there are many stories that are similar where the survivor did not feel the same way.

In response to people calling Dunham out on her revealed behavior, she tweeted this: 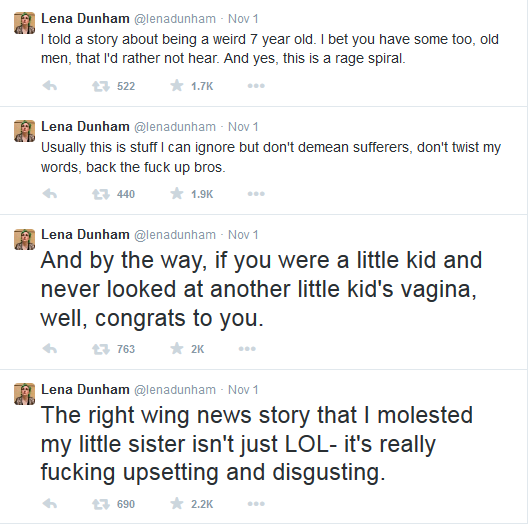 FeministFilm captured the issue with Dunham and White Feminism amazingly:

Lena Dunham is not a feminist icon.

She is racist and classist. The “apologies” that she has extended for her actions rarely qualify as actual apologies. The feminist movement does not need a woman like this to help lead us into the future.

Eurydice from “Hadestown” is My Fleabag