According to The Scientific American, “The victim of a car accident can require as many as 100 pints of blood—that’s blood from 100 generous donors across the country, meticulously matched for blood type and screened for diseases. More than 38,000 blood donations are needed daily in the U.S., but only 38 percent of Americans are eligible to donate blood, and of those, only 8 percent actually do.”

Gay and bisexual men are among those 62% of disqualified American donors who are banned by the FDA (U.S. Food and Drug Administration) from donating. Their reasoning is that men who have had sex with other men are at an “increased risk for HIV, hepatitis B and certain other infections that can be transmitted by transfusion.” Interestingly enough, however, women who have had heterosexual sex with an HIV positive partner only have to wait one year before being allowed to donate. NBC News also reported, “In 40 states, a man can even give blood immediately after getting a tattoo.” It seems that this “health regulation” is only applied to gay and bisexual men. 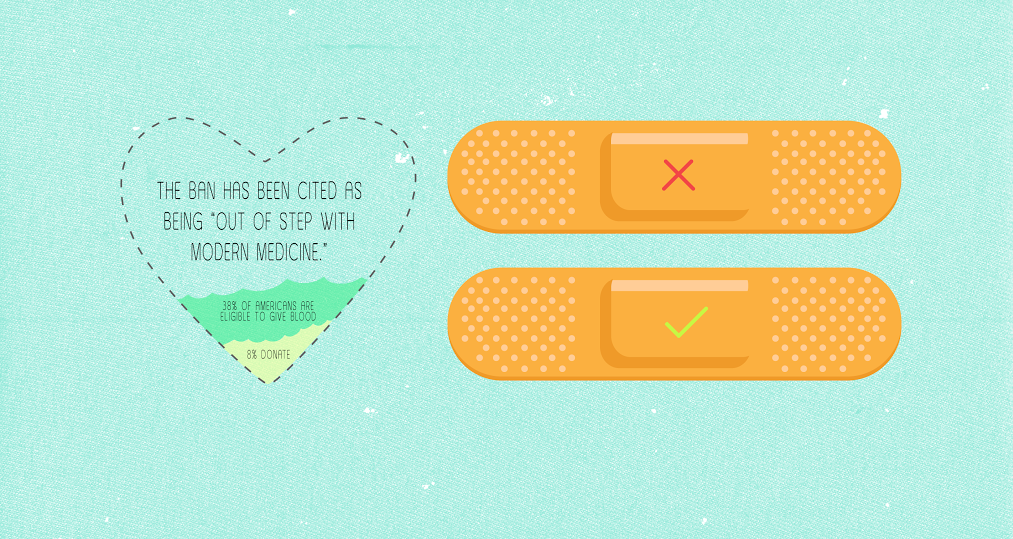 In addition, because technology allows for the detection of HIV in the blood stream mere weeks after exposure, the ban does not protect the people receiving donations. This regulation only limits the likelihood that blood banks will receive donations.

Experts at Harvard and Brown urge the FDA to remove the ban, citing it as “out of step with peer countries, [and …] out of step with modern medicine.” The Scientific American confirmed the above statement when they quoted:

“AIDS research pioneers from the Jewish General Hospital and McGill University in Montreal [who] think […] ‘Today’s technology makes it almost impossible for HIV to slip through, and the total ban puts a huge burden on blood agencies and the blood supply.”

The 30 year standing (1983) FDA homophobic regulation on blood donations from “men who have had sex with other men” is indicative of the need to expand LGBTQ civil rights dialogues beyond the marriage equality debate.

Queerness is not synonymous with disease.

Sign this petition to “Call On HHS & The FDA To End Their Ban Against Gay & Bisexual Male Blood Donors.”

Rights Not Rules: An Ethical Shift to Our Discussion of Violence on Black Bodies