When I first began to wear the scarf, I was told that I would have problems with it. Perhaps I’d be harassed, given dirty looks, or even refused service at a local restaurant,

The very year I began to wear the scarf, the World Karate Federation released a statement that said, “The decision adopted by the Executive Committee of the WKF to accept that the Muslim female athletes may wear the Hijab in competition, that has entered in force 1st of January 2013, has to be seen in the framework of a policy based not only in the deep roots of tradition but also in the continuous innovation.”

It taken them since the establishment of the World Karate Federation 23 years ago to recognize that a woman who carried a symbolic cloth on her head should be allowed to compete in karate.

I was intrigued by this released press statement but also somewhat relieved, thinking that the tension would be easier now the World Karate Federation allowed for me to openly wear the scarf. Little did I know the political and social implications that would occur not just to me, but to many other Muslim women who sought to compete in the United States.

I had been competing in martial arts for the past 10 years, and according to World Federation rules, movements that include ripping an opponent’s clothes would warrant a “warning.” Three warnings to the competitor, and, automatically, the fight would be finished with the warned individual disqualified for not obeying the rules.

I entered the ring thinking that these rules, which had been developed for over 10 years, would protect me. I found myself very wrong.

Upon entering my final match for first place, I found myself against a competitor who realized that if she was able to kick a round-house near my cheekbone, her foot would be able to slide against the back of my head and allow the scarf to slip off. As she moved her foot, I would grasp the scarf, and in this time, the competitor would drop down quickly and hit my stomach to score a point.

I watched the judges’ reactions as they allowed her to score points by using moves that took advantage of my scarf. Although audience members pointed and opposed such a move, which in my case was the equivalent of pulling down my pants, the judges allowed her to finally win the match with a dominant score.

While one would think this is the worst that could occur to a woman with the scarf, I was actually considered the lucky one. I was able to get in touch with several women from a source who requested to remain anonymous where the team had been, for a period of over two months, in contact with judges to make sure that the headscarf worn by the team would be acceptable for fights. 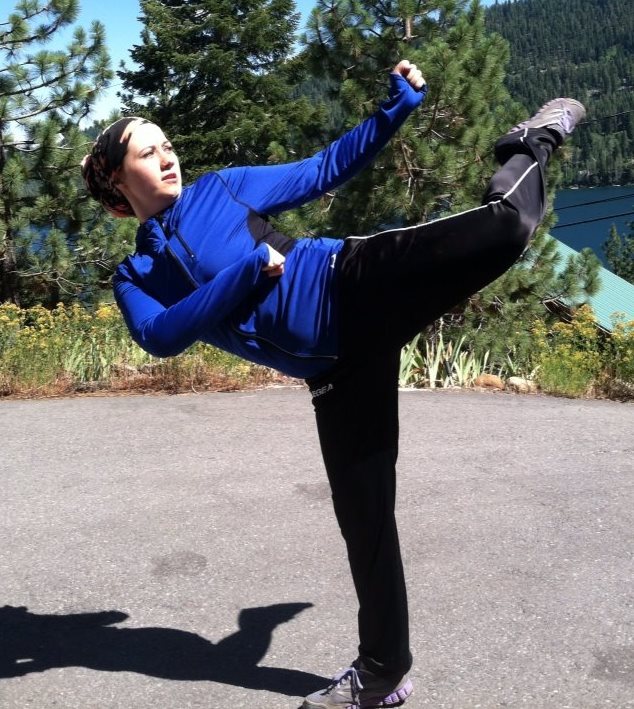 Upon their entrance to the National World Karate Federation competition in Texas, the girls were quickly disqualified from the match by judges who claimed that the World Karate Federation had not released an adequate photo representation of the approved scarves and that the girls may be choked by the scarf, therefore allowing an argument for disqualification. While the coach vehemently opposed this, waving the article that had rejected the Hijab (headscarf ban) with a photo of an Iranian girl wearing the scarf and competing, the judges quickly silenced the coach by threatening to disqualify the entire team. I approached the coach and asked her what was wrong to which she responded, “The judges had approved the scarves that I had taken photos of and sent months ago. Now that we are at the competition, they are not allowing us to compete and state that the WKF rules did not outline the proper application of the scarf, therefore canceling out the Hijab Ban.”

It is interesting to note that the only country within the World Karate Federation International competitions that bans the hijab is the United States of America, despite the fact one of its leading fighters is woman of Egyptian-descent who dons the scarf. Other teams, ranging from Kuwait to Algeria to even the U.K., have no problems with bringing forward women with scarves in different arrangements.

This application of the Hijab Ban does not only, however, apply to martial arts. Only within the last few years have other international organizations, such as FIFA, lifted the Hijab Ban to allow Muslim woman to compete in sports they had been participating in and training for their entire lives. Organizations such as the Olympics Committee do not ban the Hijab, and women have been participating within such martial arts competitions in the Olympics Committee with no problems in regards to the headscarf.

The current question remains: How does a Muslim woman continue to partake in sports while battling Western prejudice that try rather hard to depict the Muslim woman as a sad individual remaining at home? The truth is that the Muslim woman, especially in the United States, has many battles to fight, and this forces her to work for recognition within her community.

I myself am one of the only two competitors in the United States to compete nationally and wear the headscarf while other Muslim competitors within the United State are often disqualified. As a result, I am technically “privileged”—a mixture of being able to “know the right people” as well as a result of competing 10 years without the scarf.

And how will I be able to bring attention to my scarf further and begin to make strides for beginning competitors to be involved in martial arts? I will have to work twice as hard to reach the top and win the space in the top national category, something I have begun preparing for.

While I had taken third in the nation nearly three years ago, I will have to work many times over to not only be taken seriously within the category, but also to place in the top three matches.

However, such matters in Hijab Ban politics would be easier to change if only more Muslim women became involved and dedicated to the cause of sports. It is hard to make a change in national and international organizations when the mass of the affected body is minimal. This makes it easier for such organizations to slip into Orientalist prejudices of the invisibility of the Muslim woman and act under misguided perceptions to ban the hijab as means of “freeing the poor Muslim woman.” Not to mention the fact that it is extremely difficult to find sporting hijabs and that only one company currently advertises to selling martial arts hijabs.

It is time for more Muslim women to step out and compete seriously, as well as take the lead into the sports sphere within the United States in order to change the the status of discrimination in these organizations.