Harry Potter was, and still is, a global phenomenon that impacted the lives of people everywhere. From the very first book, the character of Hermione Granger is shown to be one of the smartest characters in the series.

From learning spells before she arrived her first year at Hogwarts to bravely fighting off Voldemort and his followers multiple times, Hermione Granger can be viewed as a feminist literary icon.

Hermione starts off her life differently from many of the witches and wizards that surround her. Because she comes from a family with no wizarding parents or grandparents, Hermione faces the term “mudblood” being used to degrade her. Older wizarding families like the Malfoys believe in blood purity and that Muggle-borns should not deserve magic or participate in the wizarding world. In the final novel, Hermione chooses to reclaim the word for herself:

Hermione: “I’m hunted quite as much as any goblin or elf, Griphook! I’m a Mudblood!”

Hermione: “Why shouldn’t I? Mudblood, and proud of it!”

The fact that Hermione can be seen as an outsider leads to her understanding of less respected groups within the wizarding world. After seeing House Elves being treated poorly by their families, Hermione forms the Society for the Promotion of Elfish Welfare (SPEW). Her goal was to liberate House Elves from their enslavement. Amy Borsuk, a blogger for Ms. Magazine, stated that:

“As Hermione often points out, magical creatures are underrepresented in magical society and discriminated against in magical law, especially via the devastating rule that ‘No non-human creature is permitted to carry or use a wand.’ Since wands are power in the world of Harry Potter, this law ensures wizards’ spot at the top of the social and legal hierarchy.”

Hermione is referred to repeatedly in the series as both “the brightest witch of her age” and as a know-it-all. Her love of learning can be seen from the very first book all the way to the last pages. Her knowledge is never hidden and is constantly used to save Harry and Ron from dangerous situations.

Hermione’s sense of social justice, focus in school and bravery in the face of danger and death easily place her at the top of any feminist icon list.

But this does not make her perfect. In fact, there are many issues with Hermione Granger throughout the series that are looked over.

Hermione failed to talk to the House Elves before forming SPEW and never asked them for participation or leadership. While her “mission statement” for SPEW shows that Hermione has a big heart and only wants to help, she does not think about the group as a whole.

Some even think that her determination to “free” them is embarrassing. Dobby is the only House Elf that Hermione has contact with consistently, and even though he has enjoyed his freedom, it does not mean that others will. Barty Crouch’s House Elf named Winky was given her freedom and spends most of her time getting drunk off butterbeer in the Hogwarts kitchens.

Hermione does not see this as a sign to stop her actions. She decides to try to free all the House Elves at Hogwarts by spending her time making clothing to hand out. The House Elves do not think this is a form of kindness however and refuse to clean the Gryffindor common room in protest. They feel it is an insult to their race.

Although SPEW was mostly left out of the movies, the books leave the debate open: can House Elves be happy in servitude?

Hermione does redeem herself after leaving Hogwarts. On some level, she recognizes her privilege and goes into law and advocates laws that protect Muggle-borns and magical creatures. This is a proper use of her knowledge and privilege in a magical society to actually help the creatures she has been trying to protect for so long.

Another serious issue that is never directly talked about in either the Harry Potter movies or the novels is the centaurs. When battling with Dolores Umbridge in “Harry Potter and the Order of the Phoenix,” Hermione decides to show her a weapon in the Forbidden Forest that will be used to help Dumbledore.

Part of the climax of this book and the movie is when Umbridge insults the centaurs out of fear that appear in the forest. Harry and Hermione are both present and do almost nothing to stop Umbridge from speaking. As a result of these insults, Umbridge is taken by the group and dragged into the forest.

While reading the books, we are constantly reminded that Hermione knows everything. This means there is at least one character watching Umbridge get dragged away who knows the centaur’s mythology.

Centaurs have the torsos of men and the body of horses. It is also known that the horse-half controls many of the desires felt by the creatures. A significant part of their mythology is that they rape because of these urges. Particularly, they rape human women.

Umbridge returns to Hogwarts near the end of the book. Even though she appears unharmed, mental damage is clearly present. 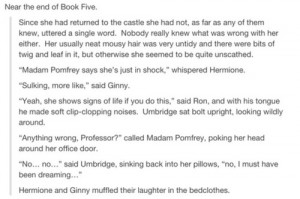 Hermione knew what was going to happen to Umbridge but did nothing to stop it. Does allowing someone to get raped, probably by multiple centaurs, still make Hermione a feminist icon?

Leave your comment below and tell us if we should still consider Hermione a kickass hero!

Z is for Zero Tolerance

Y is for Yes

W is for Weddings

V is for Virginity