2014 saw a revival in feminism through popular culture from Malala Yousafzai accepting the Nobel Peace Prize, Emma Sulkowics igniting a national protest against sexual assault, to Laverne Cox voicing the struggles of the transgender community. But, as expected, a rise in one movement often causes the rise of an opposing one.

For feminism in 2014, men (and some women) decided to counter feminists by proclaiming “Meninism.”

What does meninism actually mean?

Based on the countless twitter posts under #MeninistTwitter, meninism means the right of men to free themselves from the social expectations established by other men, without risking a deconstruction of the heteronormative framework.

Most of the posts under #MeninistTwitter consist of men complaining about paying for dates, seeking validation for the objectification of women, the right to catcall, and parodies of real life-threatening issues that just aren’t humorous.

Let’s take a look at the “rights” meninists seek to obtain in 2015.

1.)    Meninists want those pesky Valentine gifts to show off on Instagram too.

With Valentine’s Day slowly creeping up, make sure to buy them the entire isle of heart-themed products at CVS. A good $300 can go towards three bouquets of a dozen roses, ten heart-shaped boxes of ill-filled chocolates, four unreasonably large teddy bears, and a one-way ticket to San Francisco. Now you wait to for his Instagram post to show up on your timeline with the hashtag, “#ilovemyvalentine” and make sure he tags you! But we all know that he won’t actually like the gifts you got him – Valentine’s Day customs are too gendered for him to even accept them. However, it’s highly probable that he will buy you these gifts because of the obvious fact that people love receiving 12 dead roses and a box of cheap chocolates.

2.)    Meninists want equality in the bedroom.

Ah, the tremendously difficult act of “pulling out.” Because a slight thrust outward is deemed too difficult. However, I’m pretty sure that the reason why women don’t get off is because they haven’t “gotten off.” Women, for the most part, take 10 to 20 minutes to orgasm while men take about 2 to 3 minutes — but that’s none of my business. Now if this young gentleman is talking about pulling out before ejaculation, then I have an easier solution that prevents both unwanted pregnancies and STIs: CONDOMS.

3.)    Meninists want to be able to enjoy violence against women.

Yes, feminism endorses equality, but not violence. If this post refers to the illegality of men hitting women with the absence of a law that criminalizes women for hitting men, then #BYE. I’m all about self-defense against an imposing threat, but I’m thinking our friend here just wants to hit a woman without the social consequences of being perceived as a jackass.

4.)    Meninists want the freedom to invest in the sex industry. 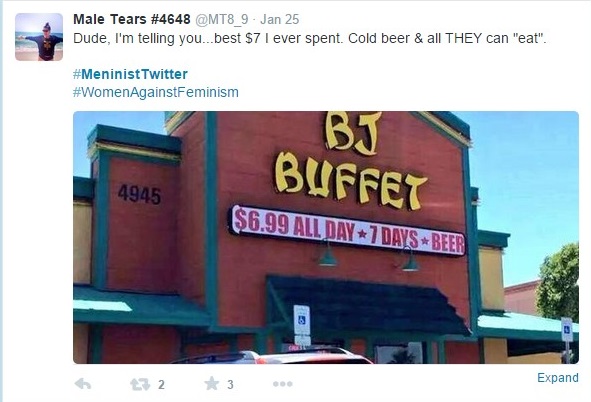 It’s easy to poke fun at an industry highly glamorized by action movies and popular culture, but when using it to validate a market that endorses child sex slaves, human trafficking, and an overall system that primarily targets women only reinforces the validity of feminism. If you really want a Bj and don’t know anyone that wants to give you one, then I suggest relying on your old friend “Palm-ela” or your HANDy friend, Manny, they always come through — and it’s consensual!

5.)    Meninists want beauty standards enforced on women, but not on themselves. 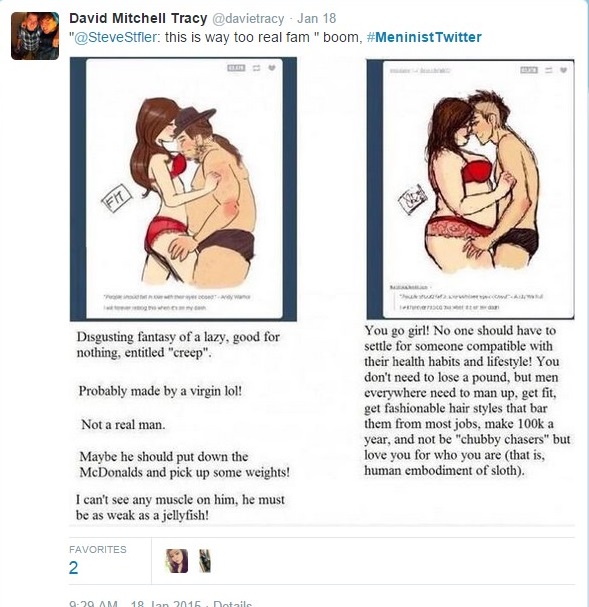 Although it is true that people often idealize a “fit couple,” it’s completely possible to be attracted to someone of a larger/smaller size. But this post simply reinforces the idea that women must be fit to be sexy while men can be sexy in all sizes. Body positive posts for women are meant to break these standards of beauty that popular culture continues to hold. Even though the media has in fact produced an ideal male-body image, it is not heavily emphasized in real life interactions nor expected for the average man, as a thin physique is expected of women. 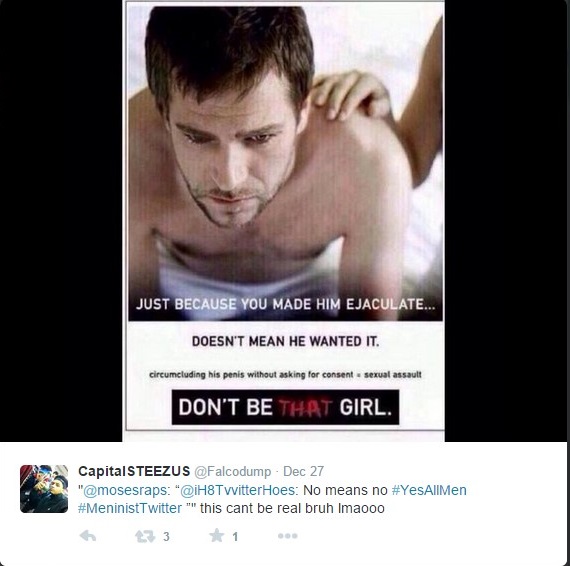 This one hits a nerve on me. If there’s one thing I can’t stand, it’s how lightly rape jokes are thrown around. This particular post is a response to the “Don’t Be That Guy” campaign that speaks out on sexual assault against women. However, meninists have yet to realize that men account for a majority of the perpetrators in sexual assault cases involving male victims. This “parody” only furthers the importance of the role that feminism plays in supporting male victims of sexual assault while providing them with resources to seek help. Nice try meninists, but we like facts, not a failed attempt at comedy.

7.)    Meninists are tired of being a minority. 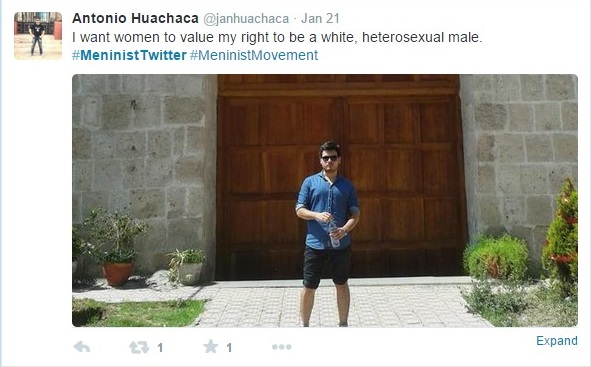 On a lighter note, THIS. Because we all know that being a white man isn’t a privilege. I think this one also deserves a #BYE.

Meninism only serves to protect the privilege white men already have by endorsing a heteronormative culture and the idealization of a fair skin tone. And yes, some may argue that the man in this picture isn’t even white — but I believe that’s what makes it all the more problematic. It essentially parodies a real life struggle that many oppressed minorities experience living in the United States — the struggle to “look” white.

According to the anthropologist Eugenia Kaw, Asian American women in plastic surgery cases undergo nose and eyelid reconstruction in order to achieve a more Anglo-Saxon look. Not only does this reveal the power of western standards of beauty, it also illustrates the ongoing self-induced changes minority women and men undergo in order to diminish any characteristics that denote race.

This “movement” does not strive for equality, more so, it strives for the maintenance of an already oppressive culture that continues to disenfranchise women and people of color alike.  Thankfully, spirited feminists like these know just how to respond to such mediocrity.