Trigger Warning: This article discusses the serious and sensitive nature of sexual assault.

Actor and director, Shia LaBeouf, claimed he was raped by a woman in early February during his art installation, #IAMSORRY. This piece entailed LaBeouf living in an L.A. gallery for five days and sitting with a bag over his head that said, “I am not famous anymore.” Strangers also sat with him, one-on-one, in silence.

LaBeouf stated that “one woman came with her boyfriend, who was outside the door when this happened, [and] whipped [LaBeouf’s] legs for 10 minutes and then stripped [his] clothing and proceeded to rape [him].”

Once LaBeouf disclosed this information, he received harsh yet completely unwarranted criticism. The victim blaming has been excessive and unjustifiable. Piers Morgan represents a classic example through these horrifying tweets: 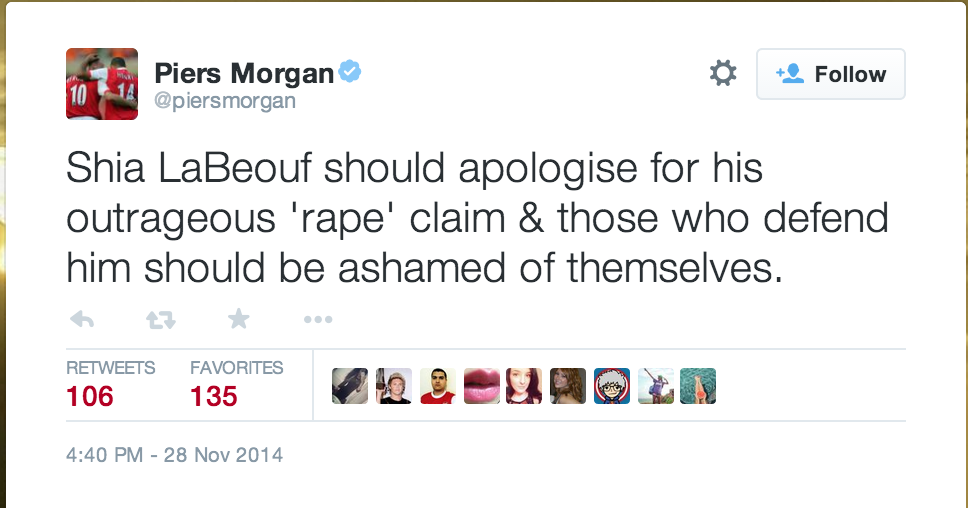 Morgan proceeded to state that “LaBeouf is one of the toughest actors in Hollywood… [but] he just let it all happen.”

Morgan made awful allegations and undermined the sensitive nature of the situation by attaching the stereotype of what a “typical rape survivor” should be. LaBeouf simply doesn’t fit it.

Holly Eagelson raises a good point. She states, “Just look at the long list of requirements defenders of rapists have for victims: It could only have been rape if it was physically forced—you know, rape rape; the women can’t have dated the rapist nor accepted professional help or money from him at any point; they should have immediately reported the rapist to the police.”

Because LaBeouf is a man, he has been chastised a great deal as he doesn’t fit the typical “rape victim” which, as stated above, tends to be a woman who has been subjected to physical force. As a man, being sexually assaulted tends to be seen as a sign of weakness. Simply seeing the backlash that LaBeouf has faced by owning up to his traumatic experience shows why many men never report it.

It’s incredibly important to treat every case with the same serious understanding as it deserves. It isn’t fair to disregard someone’s personal and traumatic experience simply because they are atypical of what a victim is expected to be. Rape relies on consent. LaBeouf didn’t give his. That’s it. Undermining such a delicate experience leads to an increase in underreporting as it makes both men and women appear “weak,” while that is not the case at all.

One of the reasons that people belittle LaBeouf’s claim is because they say he easily could have defended himself, yet didn’t. However, if he had defended himself, would that have made the woman any better? The situation might have been different, but in any case, she still attempted to rape him which is still completely unjustifiable. Another argument is that he was placed in a room with no protection, which made it almost too easy for the perpetrator. But does that make it right for someone to take advantage of another if it was just “too easy?” Not at all.

The question that is raised is whether rape is justifiable in certain contexts? The answer is a clear and stark “no.” Rape is rape, no matter the instance. All of Morgans’ allegations display a clear misunderstanding of sexual assault. The fact that people are ridiculing LaBeouf’s allegations in the face of his honesty is astounding. Simply because he is male and may not have defended himself does not excuse the woman’s actions. The way this case was handled by the media and the public at large was unacceptable. There is no perfect victim nor is there a perfect story. Rape comes in any and all contexts and must be treated with the utmost respect and sensitivity.